THE FLINTSTONES IN VIVA ROCK VEGAS 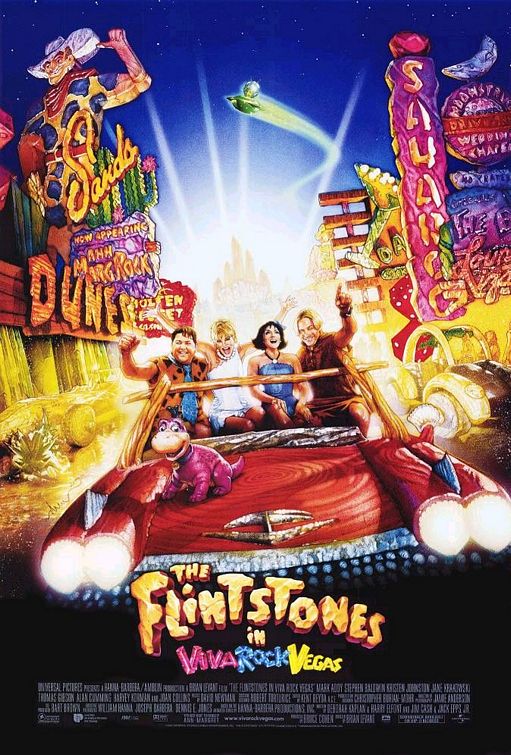 THE FLINTSTONES IN VIVA ROCK VEGAS tells how Fred and Wilma, Barney and Betty get together, with help from an alien who is studying the mating habits of humans. Wilma is tired of her life of wealth and security. She leaves home, ending up as waitress Betty’s roommate. Fred and Barney go to the burger joint where Betty works. They meet Betty and Wilma and fall for each other. Wilma brings Fred, Barney and Betty to her home for her father’s birthday, which they destroy in comic style. Chip Rockefeller invites them to his new casino so that he can make a fool out of Fred and Barney and win Wilma's hand in marriage because he needs Wilma’s money to pay off his debts.

VIVA ROCK VEGAS takes a slightly rocky road to virtue. Moral principles are upheld in the end, including honesty, marriage, decency, and hard work. Regrettably, getting to this high-minded ending involves some low-life humor and some politically correct class envy. Included among the slapstick humor are scatological jokes and homosexual jokes, including a cross-dressing sequence. Although the plot is complex, most children will just enjoy the slapstick roller coaster ride

(BB, PC, Ho, V, A, M) Ultimately moral worldview with some class biases as well as some scatological humor & homosexual humor; no foul language but some scatological references to bodily functions; cartoon type violence with man getting rammed into the ground by a large rock, man falling from a Ferris wheel & making a large indentation in the ground, man punches & knocks another man out & several other visual slapstick jokes; no sex but strong homosexual sight gags including opening alien sequence where aliens reproduce by splitting into two, alien comes to earth to view mating habits of earthlings, Barney falls from top bunk onto Fred so alien thinks they’re mating, & several heterosexual sight gags including provocatively dressed femme fatal as well as some lightweight romance including kissing; no nudity but cross-dressing as showgirls to escape security forces & some revealing costumes; suggested alcohol use; and, other sight gags like dinosaur passing gas plus gambling, deception, greed, avarice, & envy which are all clearly rebuked.

The movie then cuts to a baby shower which establishes that Wilma Slaghoople (played by Kristen Johnson from 3rd TOCK FROM THE SUN) comes from an extremely wealthy family, so wealthy in fact that Chip Rockefeller wants to marry her for her money. Wilma is tired of a false life of wealth and security, and so she wants to try real life, including poverty and bowling, and looks longingly from the spacious balcony of her mountain top mansion at the glittering lights of the pre-historic town of Bedrock. After a spat with her mother (played villainously by Joan Collins), Wilma leaves home, and eventually finds herself down and out at a burger drive-in where Betty (Jane Krakowski) works. Betty thinks Wilma is a homeless street person and, as an act of kindness, takes Wilma to her apartment.

Meanwhile, Fred (Mark Addy) and Barney (Stephen Baldwin) are trying to pass their crane operator exams at the rock quarry. Barney is given the task of sticking a thermometer into the rear end of a sick dinosaur that has flatulence. Meanwhile, Fred accidentally drops a rock on his examiner, who is compressed into the ground. They pass their exam, but Fred is not happy because he doesn’t have a girlfriend to share his victory.

As Fred bemoans his single status, the alien Gazoo crash lands next to them. After some obligatory slapstick violence, Gazoo tells them of his mission to study the mating habits of human beings.

Following this alien encounter, they go to the burger joint, where they meet Wilma and Betty. Gazoo tags along, but only Fred and Barney can see him, thus setting up a series of gags as he tries to speed up their mating habits throughout the movie.

Wilma and Fred and Betty and Barney fall for each other. Eventually, Wilma invites Fred, Barney and Betty to her home for her father’s birthday, which they wreck in classic slapstick comic style.

Because he needs Wilma’s money to pay off his debts, Chip Rockefeller invites the four of them to his new casino in Rock Vegas so that he can make fools out of Fred and Barney and win Wilma back. Two mob goons are threatening to kill Chip if he doesn’t pay those debts within days.

At his casino, Chip tricks Fred into losing more than a million clams and then sets Fred up as a thief. Eventually, Fred and Barney have to dress as showgirls to get past the police and the security officers to rescue Wilma from Chip.

As was the case with the first FLINTSTONES movie, there’s plenty of sight gags and eye candy to keep children entertained. Although the plot is complex, many children will just enjoy the roller coaster ride. The acting is surprisingly good, with all the principles doing their best to make these cartoon characters real.

Moral principles are pointedly upheld in the end. Honesty, marriage, decency, commitment, and hard work win over gambling, deception, greed, avarice, and envy. Both Joseph Barbera and William Hanna have a Christian testimony, and it shows in the clarity of the moral message.

Regrettably, getting to this high-minded ending involves some low-life humor and some politically correct class envy. Wilma wants true love, but she rebels against her parents. All of those from high society are portrayed as scheming and deceitful or as airheads. This type of class envy is more than regrettable, but it is slightly balanced by making fun of Fred and Barney’s lack of etiquette.

The physical slapstick violence is pretty lightweight and not something that children would want to copy. However, the homosexual references are annoying and the cross-dressing is unnecessary.

In all, VIVA ROCK VEGAS is a rocky road trip to a moral conclusion.

Rent or Buy THE FLINTSTONES IN VIVA ROCK VEGAS: