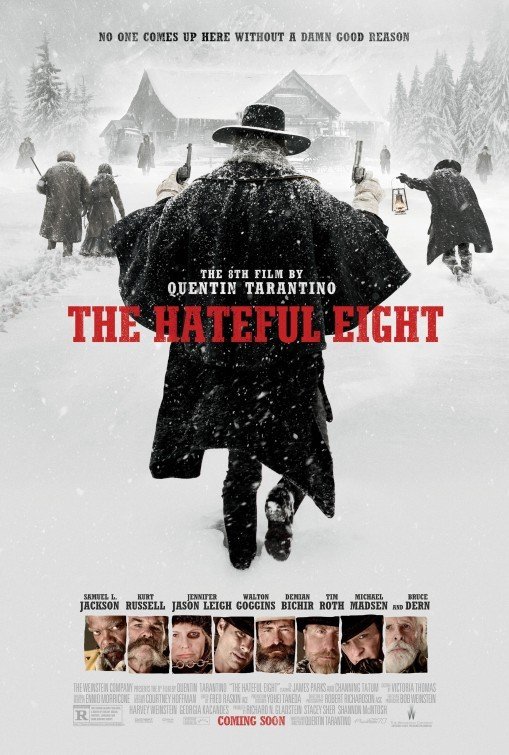 THE HATEFUL EIGHT is a Western movie from controversial Writer/Director Quentin Tarantino. Set sometime in the late 1800’s past the Civil War, a bounty hunter arrives at a way station to take shelter from a blizzard along with his bounty, a woman, who is worth $10,000 dead or alive. The cabin of eight strangers will have to bunker down and get along until the blizzard passes. However, some of the strangers are not who they say they are.

THE HATEFUL EIGHT may be a Western inspired by classic movies, but its claustrophobic, dialogue heavy story leans more towards that of a mystery than anything else. Tarantino has cultivated a loyal following among nomenklatura. Because of that, he gets away with more onscreen brutality and vulgarity than almost any other filmmaker. Sadly, HATEFUL EIGHT is void of any sense of justice or good vs. evil, a movie of lawlessness and despicable characters, which disappoints because it fails to pay real homage to the great westerns of old. Extreme violence, incredibly offensive language and hateful speech make HATEFUL EIGHT unsuitable viewing for all moviegoers.

(PaPaPa, B, LLL, VVV, SS, NN, AA, D, MMM) Very strong pagan, lawless worldview with no sense of good or evil, except for the fact that racism is portrayed as an ugly trait; more than 70 obscenities (including many anachronistic uses of the “f” word), the “n” word is used throughout and 25 strong profanities (GD and JC); very strong violence includes every single individual in the movie being shot at least once, with blood splatter, heads are blown off with single bullets, two men vomit up blood, innocent women are murdered, a man is brutally stabbed, dead man’s arm is cut off, woman is hung; a man (probably lying) describes another man committing oral sex, and this is briefly seen; a man is forced to walk through the snow naked, with full frontal and rear male nudity; moderate drinking; smoking; and, racism, greed, stealing, murder, and bribery.

THE HATEFUL EIGHT is a Western from pseudo-Writer/Director Quentin Tarantino, about a bounty hunter who must protect his fugitive worth $10,000 while taking shelter in a cabin with five other strangers. THE HATEFUL EIGHT is a long, sometimes entertaining, but mostly offensive and gruesomely violent, movie.

Set sometime in the late 1800s past the Civil War, a bounty hunter, John “The Hangman” Ruth (Kurt Russell), has captured a fugitive, Daisy Domergue, wanted dead or alive for a $10,000 reward. John earned the nickname “The Hangman” because he always brings his bounty in alive. Escorting Daisy Domergue to Red Rock, Wyoming in the dead of winter, John’s stagecoach stops to pick up two men walking in the cold, a fellow bounty hunter whom John somewhat knows, Major Marquis Warren (Samuel Jackson), and Chris Mannix, a southerner who claims to be the new sheriff Red Rock elected. John doesn’t trust Chris, so he partners with Major Marquis, making a deal to watch each other’s backs so no one steals their bounty.

A blizzard forces the stagecoach to stop at a shelter called Minnie’s Haberdashery. The two bounty hunters, Chris, the stagecoach driver O.B., and Daisy enter Minnie’s Haberdashery and are greeted by four other strangers seeking refuge from the storm. There’s Bob “The Mexican” who informs John and Major Warren that Minnie, the owner of the Haberdashery, is visiting her mother, so he was left in charge. There’s also Oswaldo (Tim Roth), a talkative British man who’s the hangman of Red Rock, and General Sanford Smithers (Bruce Dern), a former general in the Confederate army who’s looking for his deceased son. Last but not least, there’s the brooding and most mysterious Joe Gage, who mostly keeps to himself.

John is most concerned that someone will try to steal his bounty, so he makes it abundantly clear to everyone in the cabin that Daisy is his and anyone that tries to interfere will regret it. He and Major Warren also go about disarming everyone in the cabin. Other than the fact that some present have ill will towards him just because he’s black, Major Warren begins to suspect something else is afoot, and somebody is lying about who they say they are.

THE HATEFUL EIGHT may be a Western inspired by movies like THE GOOD, THE BAD AND THE UGLY and RIO BRAVO, two of Tarantino’s favorite movies, but its claustrophobic, dialogue heavy story leans towards that of a mystery more than anything else. Like a Sherlock Holmes whodunit, THE HATEFUL EIGHT keeps viewers guessing as to who is trying to kill whom and why. However, it takes nearly 80 minutes and an intermission to set up the characters and build enough tension for the explosive second half. One of Tarantino’s most brilliant feats was convincing legendary Western composer Ennio Morricone (THE GOOD, THE BAD AND THE UGLY and THE UNTOUCHABLES) to write his first original score for a Western in nearly 40 years. The tense and progressive music never grows more grandiose than the intimate enclosed story it’s aiding.

Tarantino has cultivated a loyal following among the nomenklatura, and with that he gets away with more onscreen brutality and vulgarity than almost any other filmmaker. Claiming that THE HATEFUL EIGHT is his most political movie yet, Tarantino tries to show equivalence in the racial depredations experienced by Major Warren to that of today’s African-American male. “A black man is only safe when a white man is disarmed,” Warren says at one point, although this statement is contradicted when a racist southerner ends up defending his life later in the movie. As political as Tarantino may think his movie is, its hardly divisive since no one in their right mind would side with the offensive racists. His biggest offense in that realm is condemning all southerners as racists.

Sadly, THE HATEFUL EIGHT is void of any sense of justice or good vs. evil, something even DJANGO UNCHAINED had. It’s a movie of lawlessness and despicable characters, which in turn doesn’t pay homage back to the Westerns of old that had no such ethical ambiguity. THE HATEFUL EIGHT takes violence to the extreme, blowing up heads with single bullets, in addition to long monologues of hateful and racist speech that audiences will grow tired of hearing quickly. It’s an excessively long, gruesome and abhorrent experience that all media-wise individuals will want to avoid.