"Marred by a Final Revenge Motif" 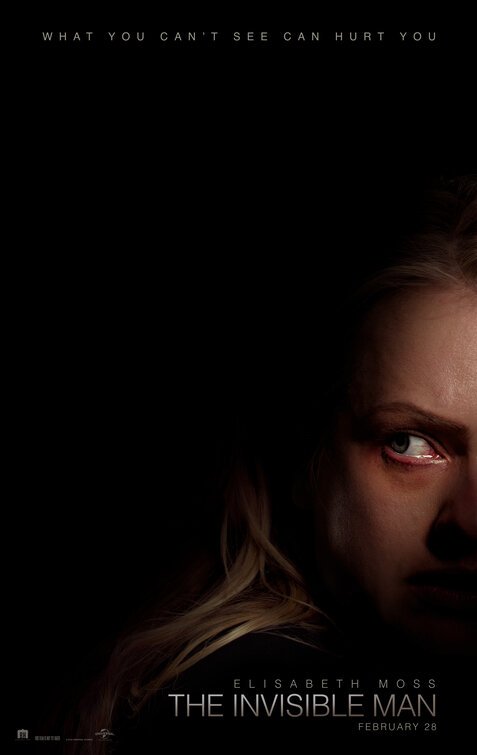 THE INVISIBLE MAN (2020) is a new 2020 science fiction thriller that’s not based on the classic science fiction novel by H.G. Wells. The new story is about a present-day woman who’s stalked by her former abusive lover, who’s invented a suit that makes him invisible. The man appears to have committed suicide after the woman escapes and hides from him. However, when the invisible man commits a bloody murder and frames her for it, the woman has to figure out a way to fight back and expose him.

THE INVISIBLE MAN (2020) has some thrilling moments, but the best, most exciting ones don’t really come until the third act. Until then, the movie is sometimes boring and pedestrian, perhaps because we’ve seen stories about evil ex-boyfriends many times before this movie. The movie has a couple apparent plot holes and a couple final plot twists that don’t make sense. Also, the final twist has a revenge motif that dilutes the heroine’s rousing moral victory over her invisible stalker. Finally, THE INVISIBLE MAN (2020) includes some strong but minor foul language and some graphic violence.

(Pa, BB, LL, VVV, A, MM):
Dominant Worldview and Other Worldview Content/Elements:
Light mixed pagan worldview where a strong moral story about a woman fending off her abusive ex-boyfriend/stalker who’s invented a suit that makes him invisible is marred by a self-serving revenge motif at the very end
Foul Language:
Nine obscenities (five “f” words), one Jesus profanity, and one OMG profanity
Violence:
Some very strong and strong scary violence with some blood shown or spraying includes man wearing invisibility suit shoots at least one mental facility guard in the head, one guard in the head, punches and kicks and slams several other guards until they’re unconscious or almost unconscious, slams woman against a wall and over a large table that turns over in another scene, tries to choke teenage girl to death in still another scene, and tries to choke woman to death in an earlier scene, woman and guards fight back in these scenes, but they can’t see the man because of the suit, woman manages to stab invisible man several times with a sharp fountain pen, and this makes his suit sometimes visible because its mechanism is slightly damaged, invisible man slits woman’s throat at a restaurant and inserts the knife into another person’s hand so that they are charged with murder, a man’s throat is slit, invisible man starts a stove fire, a man’s suicide is apparently faked (the movie shows a photo of the man lying in a pool of blood), a scary scene where woman with a gun tries to find her invisible boyfriend in the rain after she escapes a mental facility (she damaged part of his fancy invisibility suit and ran for her life), but he eventually grabs her and threatens her friend’s teenage daughter, woman spills paint over invisible boyfriend so she can get away from him, etc.
Sex:
No sex scenes but woman, learns her abusive boyfriend switched her secret birth control pills and replaced them with a drug, so she’s becomes pregnant
Nudity:
No nudity but some female cleavage, and woman wraps a towel around herself as she exits a shower (nothing explicit shown)
Alcohol Use:
Brief alcohol use and woman pulls out a champagne bottle for a celebration
Smoking and/or Drug Use and Abuse:
No smoking or drugs depicted, but there is talk about woman having a drug in her system; and,
Miscellaneous Immorality:
Woman’s boyfriend has apparently been physically and emotionally abusive, he frames the woman for murder and she’s put into a fancy insane asylum, abusive boyfriend wearing an invisibility suit stalks the woman, and an act of revenge is not rebuked but appears to benefit a couple people monetarily.

THE INVISIBLE MAN (2020), a new science fiction thriller that’s not at all based on the classic science fiction novel by H.G. Wells, is about a present-day woman who’s stalked by her former abusive lover, who’s invented a suit that makes him invisible. THE INVISIBLE MAN has some thrilling moments, but the best ones don’t come until the third act, and the movie’s positive moral elements are fatally marred by a brutal act of vigilante revenge at the end.

The movie opens with a woman named Cecilia sneaking out of her rich boyfriend, Adrian’s, beautiful house on a hill. She makes it to the garage when their Doberman dog, Zeus, startles her, and she trips the alarm on Adrian’s fancy car. Cecilia quickly manages to climb over the wall guarding the estate and make it through some woods to a two-lane highway. However, her sister, Alice, hasn’t arrived there yet with her car to spirit Cecilia away. Then, when Alice does arrive about a minute later, she’s slow to peel away, and Adrian manages to smash the passenger window and try to grab Cecilia. The two women manage to drive away in the nick of time, however, but a pill bottle Cecelia was trying to hide from Adrian falls out of her bag (the bottle will become important later).

Cut to Cecilia staying at the house of a friend, a San Francisco police detective named James, who has a teenage daughter, Sydney (apparently the mother has died). Cecelia is still very scared of going out of their house. She’s right to be frightened, because an invisible person seems to be stalking her in the house. A mysterious stove fire, a disappearing knife and bedsheets that move by themselves are the only clues, but one night Cecelia looks around the front porch and the condensation from the invisible person’s breath appears behind her as she stares out toward the street.

One day, however, Cecelia’s sister, Alice, appears and informs Cecilia that Adrian, who’s a renowned genius in the physics of optics, has committed suicide. At the same time, Alice delivers a letter from Adrian’s brother, Tom, about receiving part of the fortune Adrian left. Alice and Cecelia visit Tom, who tells them Adrian left Cecilia $5 million, to be paid in monthly installments of $100,000. Cecelia accepts the offer. Naturally, she’s also finally relieved that Adrian is dead. To show her appreciation to James and Sydney, Cecelia decides to give $10,000 a month of the money to Sydney for a college fund, until the money runs out.

However, Cecilia continues to be stalked by an invisible presence. One day, the pill bottle that dropped out of her purse, now with blood on its label, shows up in her bathroom. Also, her sister gets a mean email from Cecelia that she never sent. The email tells Alice that Cecilia feels smothered by Alice and never wants to see her again. Of course, Alice doesn’t believe Cecelia’s protestations that she didn’t send the email.

Cecelia convinces James to visit Adrian’s brother Tom. She brings the bloodied pill bottle with them. However, when she tries to tell Tom and James that Adrian’s not really dead and that he can make himself invisible, they stare incredulously at her. Tom explains that his brother was a very mean, clever and deceitful person, as well as being very rich, and could have arranged for the email and the bottle to be delivered before he committed suicide.

Cecilia is somewhat mollified but remains skeptical. Then, while Cecilia is sharing a positive moment one night with Sydney, the invisible stalker suddenly wallops Sydney. Sydney thinks Cecilia hit her, and a very angry James drags Sydney out the door to safety, heading toward her aunt’s house. Now alone in the house, Cecilia devises a plan to expose the invisible stalker, who she still believes to be Adrian.

The cat and mouse game between Cecilia and her invisible stalker starts to escalate until the stalker manages to commit a bloody murder and frame Cecilia for it. As she’s dragged off by police, Cecilia’s protests of innocence go ignored because she’s screaming about an invisible ex-boyfriend who’s known to have committed suicide.

Will Cecilia be able to expose the stalker and prove her innocence? Also, is her suspicion that Adrian is the murderous stalker really true? It would seem so, because all the signs point to him.

THE INVISIBLE MAN has some thrilling moments, but the best, most exciting ones don’t really come until the third act, after Cecilia is placed in the mental facility. Until then, the movie is sometimes boring and pedestrian, perhaps because we’ve seen stories about the evil ex-boyfriend many times before this movie. The movie also has some apparent plot holes (one can never be absolutely certain about this because we’ve seen many apparent plot holes disappear after a little thought is applied to finding an explanation). For example, at one point, Cecilia finds Adrian’s cellphone in the house up in the attic. The phone has a photo on it of Cecelia and Sydney sleeping, which could only have been taken by Adrian or someone working with Adrian. This discovery could prove that someone, probably Adrian, has been cleverly stalking Cecilia, but she never gives the phone with the photo to James, Sydney’s concerned father, or the police. In addition, a couple final twists toward the end don’t make complete sense. Also, the movie’s final twist involves a brutal act of selfish revenge that dilutes the heroine’s rousing moral victory over her invisible stalker.

MOVIEGUIDE® finds THE INVISIBLE MAN (2020) excessive and unacceptable because of this final revenge motif. Rated R, THE INVISIBLE MAN also contains some strong foul language, including several “f” words and a strong profanity, and graphic violence.

If you’d like to see a much better movie about an invisible man, you can’t go wrong watching Universal’s wonderful 1933 version of the H.G. Wells novel by James Whale (THE BRIDE OF FRANKENSTEIN), which is also titled THE INVISIBLE MAN. This classic movie is funny, exiting and, ultimately, tragic, with a tour de force voice performance by the great Claude Rains as the title character, who’s driven mad by the chemicals he uses to become invisible. The late Gloria Stuart, of TITANIC fame, co-stars as the invisible man’s distraught and sympathetic fiancée. THE INVISIBLE MAN RETURNS, a 1940 thriller starring Vincent Price, is also pretty good.