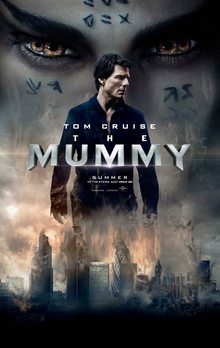 THE MUMMY stars Tom Cruise in a new version of the horror classic, with some gruesome special effects and a large dollop of fantasy and action adventure. Cruise plays Nick Morton, an American reconnaissance officer in Iraq, who’s raiding the artifacts he’s supposed to protect. Nick accidentally releases an evil Egyptian princess who’s been mummified. She possesses a dagger from the Egyptian god of Death that has immense occult power. She goes on a violent rampage to find a special diamond that can give the dagger its full evil power. Nick may be the only one who can stop her.

Somehow, THE MUMMY seems fun and coherent for its first two-thirds. Also, it’s nice to see Tom Cruise play a different kind of hero than his MISSION: IMPOSSIBLE spy. However, the story goes off the rails in the third act, to become convoluted, confusing and unbelievable. THE MUMMY also contains some extreme violence, gruesome special effects and sexual content. Finally, the occult evil isn’t completely overcome, but actually infects the hero. So, this version of THE MUMMY fails to be media-wise entertainment.

Worldview: Very strong, slightly mixed pagan worldview with strong occult elements (including occult chants and spells) that infect the hero because of a decision he makes to solve a plot problem, even though it’s clear that the occult villain is pretty evil so there’s at least some victory of good overcoming evil, but it’s not complete, plus American reconnaissance officers have gone rogue so there’s a light Anti-American aspect. Language: Eight obscenities and eight profanities.
Violence:
Some very strong violence with gruesome special effects and lots of strong action violence, with many scary elements, include it’s implied in a flashback that an evil Egyptian princess slashes the throats of her father, his wife and her infant brother (a small blood spatter hits her face as she kills the infant), flashback shows implied naked princess on top of shirtless and implied naked lover drawing a knife with occult power along his body and down out of range while kissing him voraciously and then raising the dagger up to stab him before she gets shot with darts and captured and mummified alive, one large gunfight with machine guns and explosions and numerous buildings  damaged, thousands of large spiders swarm towards people in a deep pit to bite one of them and turn him into a zombie, zombie later stabs his military superior and threatens to stab others before he’s stopped by being shot three times (no blood shown here), thousands of crows smash into a plane, destroying the windshield and some engines and causing the plane to careen towards an unseen crash as the people onboard float dangerously amid loss of air pressure and one man sacrifices himself by giving a woman the only parachute onboard, the evil princess is seen in a state of gruesome bones and muscle and writhing grotesquely as she jumps on living men and violently places her mouth on their mouth to suck their spirit and life force into her body as she regenerates to looking like a normal living woman, her victims decompose in gross fashion and also attack others, one battle involves zombies attacking the hero and a female sidekick as they try to speed to safety in an ambulance, hero and woman smash ambulance into a tree to break a zombie monster in half and separate its legs from its torso, evil princess tries to drown woman, gruesome attempt to freeze evil princess for future study, and numerous fight scenes between men and with the evil princess, including lots of punching, kicking, throwing of bodies and knocking heads into hard surfaces and walls.
Sex:
Shots of strong but not extremely explicit sexual encounters involves evil princess on top of two men to carry out an occult death ritual to gain eternal life, and hero and female sidekick briefly discuss having had a one-night stand via innuendoes.
Nudity:
Partial upper and rear female nudity in sexual situations, rear female nudity in anther scene, images of upper male nudity, and hero covers his private parts in another scene where he wakes up naked in a morgue.
Other Content:
Hero is seen drinking to forget the odd horrors he’s seen in a humorously intended moment; and strong miscellaneous immorality includes “hero” and his sidekick break their military superiors’ orders to sneak into an Iraqi village and loot a treasure to sell to high bidders, and it is discussed that they do this on all their missions.

THE MUMMY is an action-adventure movie with strong fantasy and horror elements that is a reboot of the classic 1932 horror film THE MUMMY starring Boris Karloff and the 1999 hit adventure starring Brendan Fraser. It follows the adventures of a rogue US soldier named Nick Morton as he accidentally revives and releases an evil, mummified Egyptian princess named Ahmanet, then tries to stop her from bringing Set, the Egyptian god of Death, into the world.

While THE MUMMY has some exciting moments and star Tom Cruise brings humor and vulnerability to Nick in a refreshing change of pace from his usually unstoppable heroes, its plot is unfocused and falls apart in the final half-hour. Even worse, it features overly gruesome effects throughout, in addition to highly pagan and occult elements and repeated depictions of its nude villainess committing or attempting violence in sexualized situations. Ultimately, the hero accepts the use of occult means to solve plot problems toward the end.

The story kicks off in England in 1127 AD, as a Crusader knight is buried with a giant red diamond in his tomb while other knights chant in Latin in a foreboding ceremony. It then jumps to the present day, where the tombs of the knight and his peers have been discovered and a mysterious man named Henry (Russell Crowe) takes over the excavation site with his minions.

As Henry stands in awe of the tombs, his pretentious voiceover and a rather intense flashback informs viewers that the site is tied to an evil ancient Egyptian woman named Ahmanet (Sofia Boutella). She was the daughter of a pharaoh, destined to inherit the throne until the pharaoh fathers a son, who would take her place in line.

Ahmanet clings to her power by killing her father, his wife and male child. She also tries to live forever by ritually killing a lover with the supernaturally powered Dagger of Set, the Egyptian god of Death. However, she is captured before achieving her goal, mummified alive and trapped in a pit more than 1,000 miles outside of Egypt, with the intention of keeping her there forever.

Back in present-day Iraq, two US reconnaissance officers, Nick Morton (Tom Cruise) and his sarcastic sidekick, Chris Vail (Jake Johnson), have gone rogue by looting and selling the ancient treasures of the villages they’re supposed to protect from Muslim insurgents. Nick finds way more than he imagined when, while searching for the Dagger of Set, the ground opens to reveal Ahmanet’s pit. Once inside, Nick’s reckless actions unwittingly bring her sarcophagus to the surface.

This discovery results in a confrontation with beautiful archeologist Jenny Halsey (Annabelle Wallis), who’s angry because Nick stole her map to the pit after a one-night stand. Nick’s military supervisor orders the sarcophagus flown on a cargo plane to the US for examination. This unleashes a string of disasters including a sandstorm and a massive swarm of crows that destroy the plane’s engines and windshield.

Nick saves Jenny from certain death by offering her the only parachute on the plane as it careens to the ground. He then awakens mysteriously unscathed and in a body bag in a hospital morgue. However, Chris is now a wisecracking zombie. Also, Nick is troubled by visions that make Jenny realize Ahmanet is alive and trying to make him her accomplice in bringing Set to life and making herself immortal. Ahmanet is also on a rampage to find the diamond that was buried with the Crusader, because it’s the key to giving the dagger its full evil powers.

Somehow, Director Alex Kurtzmann manages to make THE MUMMY seem fun and coherent for its first two-thirds. However, when Nick and Ahmanet each wind up at Henry’s bizarre compound, it goes off the deep end with a string of violent and annoying confrontations that destroy what little logic remains. The movie ends with a ridiculous voiceover conversation between Henry and Jenny that tries to establish further globetrotting adventures for Nick. Regrettably, the idea is such a jumble that it may never occur, despite Universal Studio’s desire to raid its vault of monster characters to create a new franchise.

It’s a nice change of pace to see Tom Cruise play a character who’s not unstoppably superhuman like his MISSION: IMPOSSIBLE agent, Ethan Hunt. However, this MUMMY is too convoluted in places, too gruesome in others, never quite scary enough, and sadly falls completely to pieces in its utterly bizarre and confusing final half hour.

THE MUMMY features grisly effects throughout and a pagan/occult storyline centered on false gods and evil incantations. Also, the hero eventually uses occult means to solve plot problems and is infected partly by evil. Finally, there are some strong sexual elements in two scenes where the evil princess tries to use the Egyptian god of Death’s dagger in an occult ritual. Those two scenes include partial explicit female nudity.

THE MUMMY fails to be media-wise entertainment. It’s definitely too excessive.