THE OTHER BOLEYN GIRL 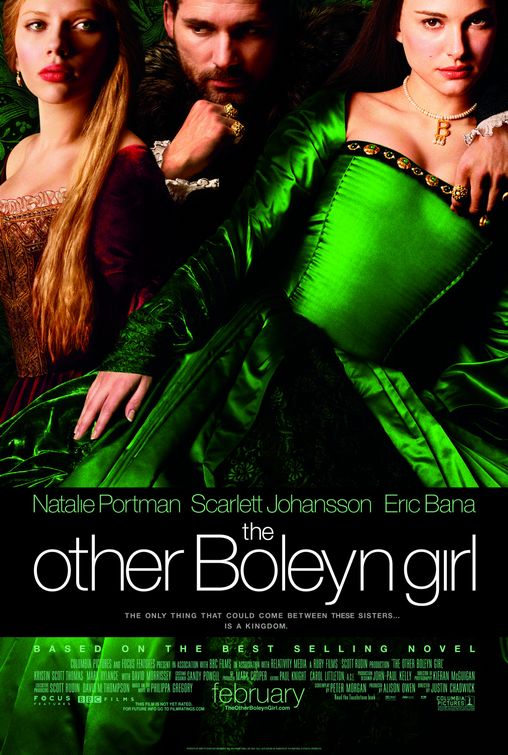 THE OTHER BOLEYN GIRL deals with a lot of English history in a short running time. Based on a novel, the story concerns the adulterous love affairs that King Henry VIII had with, first, Mary Boleyn, and then with her older sister, Anne. Thomas Boleyn, Mary and Anne’s father, and their uncle, the Duke of Norfolk, force Anne and then Mary to pursue the King. This occurs just before and during the time when they begin serving Henry’s first wife, Katharine of Aragon, who has failed to give Henry a male heir. Eventually, King Henry’s pursuit of Anne Boleyn results in him breaking from the Roman Catholic Church and founding the Church of England.

THE OTHER BOLEYN GIRL gives short shrift to this story’s religious aspects. Instead, it concentrates on its fictional depiction of the personal relationships between King Henry, Anne and Mary. Eventually, the movie asks viewers to sympathize with the adulterous women because the men around them, especially the powerful ones, are more mean, corrupt and sinful. This gives it a strong Romantic worldview with a strong feminist attitude. The movie also contains strong sexual references but no explicit nudity.

(RoRo, FeFe, RHRH, C, B, L, V, SS, N, A, MM) Strong Romantic worldview with strong feminist content and revisionist history where male society shapes some women to do evil things, plus some positive Christian and moral elements, but viewers are asked to sympathize with adulterous women because the men around them, especially the more powerful ones, are more mean, corrupt and sinful; two light profanities; some violence (but not in your face graphic) includes implied beheading of two people (movie does not show the actual beheadings); strong sexual content includes passionate adulterous kissing and being in bed together, implied intercourse, woman proposes to brother that they have incest so that she can give her husband a male heir but they do not carry out the act, and rape strongly implied (not shown in explicit detail); upper male nudity and some shots of women’s bare backs, but nothing explicitly sexual; alcohol use; no smoking; and, ambition and lust for power rebuked, corruption, and jealousy.

THE OTHER BOLEYN GIRL deals with a lot of English history in a short running time. Thus, it plays too much like unreliable, compressed Cliff Notes on the reign of King Henry VIII and his scandalous love affairs with Anne Boleyn and her sister, Mary. Ultimately, the changes that the movie makes in the historical record, including some important gaps, don’t give any great insight into these famous people or the time in which they lived.

Based on a novel, the story deals with the adulterous love affairs that King Henry VIII had with, first, Mary Boleyn, and then with her older sister, Anne. The historical record indicates that Henry pursued Mary and Anne when they came to court to serve his first wife, Katharine of Aragon. This movie, however, shows Thomas Boleyn, the father of Mary and Anne, and their uncle, the Duke of Norfolk, forcing Anne to pursue the King when he comes to their manor for a hunting trip. Thomas and the Duke want to gain power for their family through this.

The king becomes injured, however, while riding after Anne, so the two men force Mary to pursue the King instead, even though she has just become betrothed to another man.

The movie then compresses about ten years of time into its remaining screen time, depriving viewers of some of the important nuances of these relationships and their effect on history. Eventually, King Henry’s pursuit of Anne Boleyn results in him breaking from the Roman Catholic Church and founding the Church of England, which eventually became the worldwide Anglican Communion, including the Protestant Episcopal Church in the U.S. The movie gives short shrift to this part of the story, focusing instead on its fictional depiction of the personal relationships between King Henry, Anne and Mary. In this depiction, Mary is upset about Henry turning his attentions to Mary and goes out of her way to seduce the king, even though she knows that Mary has come to love Henry. This sets the stage for the story’s climax when the King turns away from Anne after she cannot give him the male heir he so desperately wants and needs.

King Henry VIII often comes across as the major villain in the historical record regarding Anne and Mary Boleyn. Apparently, it was he who pursued them. In this movie, Anne’s ambition and her jealousy of her sister’s relationship with Henry is the catalyst. Eventually, she pays for her sins with her life. Mary also pays for her sins when Henry turns his lustful attentions to Anne, even though Mary has borne him an illegitimate son. Of course, Henry pays for his sins when he never gets the heir he really wanted. Instead, it is Mary’s daughter, Elizabeth, who becomes Queen. In the end, it is England that gets the best part of the deal, because Queen Elizabeth I is one of the strongest national leaders in recorded human history. And, the Elizabethan Age spawned William Shakespeare, the greatest Christian author in history. It also led to the Protestant foundations and Christian heritage that created the United States.

One interesting historical fact to note in all this is that one of the reasons Henry split with the Catholic Church was that, when he wanted to annul his marriage with Katharine of Aragon to marry Anne Boleyn, the pope at the time vacillated for years. This angered Henry and helped encourage him to go ahead and break with Rome and form the Church of England.

THE OTHER BOLEYN GIRL, however, minimizes the Christian history behind this story and the English culture. It even cuts short Anne Boleyn’s excellent Christian declaration at her execution. As a result, the machinations between Henry, Anne Boleyn, Henry’s first wife, the Catholic Church, and the Protestant movement are hardly dealt with at all. This is a major problem with all such secular histories, which either ignore God and the history of Him working through his Church or which condemn God and the Church, hurling all sorts of false accusations at them. The History of Man is actually the History of God communicating with and working through mankind, including Jesus Christ, who is fully Man and God.

Another problem with THE OTHER BOLEYN GIRL is that viewers eventually are asked to sympathize with its two female protagonists, despite their adultery with Henry and despite Anne’s ambition, lust for power and jealousy of her sister Mary. Ultimately, the movie seems to excuse the women’s sinful actions because the men, especially the more powerful ones, are more mean, corrupt and sinful. This gives the movie its strong Romantic worldview and feminist implications. It also undercuts the sympathy that the movie wants viewers to have for Anne and Mary at the end. This may not bother viewers with little or no moral compass, but moviegoers with strong faith and values are more likely to be bothered. They may find it harder to identify with the two sisters when Anne is accused of treason and her life and Mary’s life are threatened. Ironically, though the movie suggests that it’s the male world of public power and ambition that destroys Anne Boleyn, it is her sister, Mary, who rejects that world, who ultimately survives.

On the positive side, the movie clearly shows that unrestrained ambition, lust for power and jealousy are evil. In fact, Anne and Mary’s mother several times points out to her husband, her brother and her daughters that these things are ungodly. Thus, the movie sometimes reminds viewers of God’s Truth. By the end of the movie, however, the sympathy lies with Anne and Mary when both are threatened with death, despite all the mean things Anne has done and despite Mary’s adulterous love for Henry. THE OTHER BOLEYN GIRL also contains strong sexual references, but it has no explicit nudity, so extreme caution is in order.