"Family Is the Greatest Legacy" 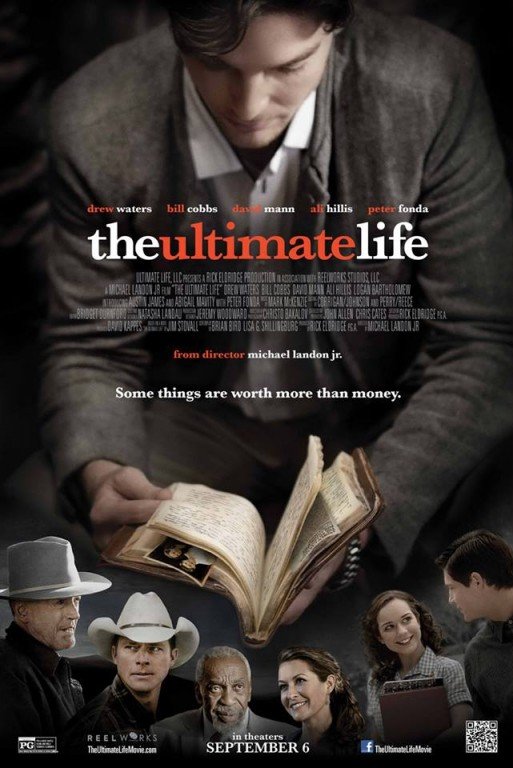 THE ULTIMATE LIFE takes place right after the events of THE ULTIMATE GIFT. Jason Stevens tries to balance life as a billionaire and his relationship with his girlfriend Alexia. Making matters worse, his greedy extended family sues him. Trying to find guidance dealing with his family and a strained relationship, Jason starts reading his grandfather’s journal.

THE ULTIMATE LIFE is a well-made, fun, heartwarming sequel to the beloved movie THE ULTIMATE GIFT. Though the quality doesn’t quite live up to the first movie, it has positive values and an uplifting message for the whole family. The movie gives a lot more background to THE ULTIMATE GIFT. It depicts how Jason’s grandfather developed his friendships, his business and the “Twelve Gifts” he passes onto Jason. The strong moral worldview upholds values like capitalism. The grandfather learns that success comes from hard work and being a leader of men. Most importantly, the movie teaches that family is the greatest legacy you leave behind when you leave this world. THE ULTIMATE LIFE has no objectionable content, though a brief battle scene might scare young children.

(BBB, CC, CapCapCap, PP, V, M) Very strong moral worldview with strong Christian values extols the idea that family is the most important legacy, with very strong capitalist and free market content promoting hard work, leadership and building a business that can use wealth to do good, plus other values include sacrifice, forgiveness, patriotism, and putting loved ones before work; no foul language; light violence includes a World War II battle scene in which a young boy gets hit by some shrapnel, and some blood is seen; no sexual content, light kissing; no nudity; light alcohol consumption; no smoking or drug use; and, protagonist pursues wealth and success at the expense of his family, but he repents at the end.

THE ULTIMATE LIFE is a well-made, fun, and heartwarming sequel to the beloved movie THE ULTIMATE GIFT. It picks up where the first movie left off.

Jason Stevens is trying to balance his new life as a billionaire with his relationship with Alexia. Jason feels ready to marry, but his girlfriend feels called to serve at a mission clinic in Haiti. With his greedy extended family trying to sue him, Jason gets distracted from Alexia’s wants and needs. She decides to go to Haiti, leaving Jason to sort out his priorities.

With no one else to turn to, Jason visits Hamilton for advice. The calm and collected Hamilton explains that Jason’s grandfather, Red Stevens, faced a similar struggle when he became wealthy. Hamilton gives Jason his grandfather’s journal, in which Red recorded his rise from poverty to wealth.

Red wrote in his journal about his family’s level of poverty in the 1940s. With his father barely able to put food on the table, Red vowed he’d be rich one day. At 15, he ran away from home and finds work at a Texas ranch where he not only proves himself as a hard worker but also as an entrepreneur. His plans to travel to California are paused when he meets a beautiful girl named Hanna. Their bond develops, but she declares she won’t see him unless he attends school. So he does.

Years pass. Red and Hanna get married, and Red begins his quest for riches by drilling for oil on Texas farmland. With help from friends, Red’s dream empire begins to develop, but his family grows more distant every day. It takes a tragedy for Red to fully realize the harm he’s doing to those closest to him.

THE ULTIMATE LIFE is a well-made, fun and heartwarming sequel to the beloved movie THE ULTIMATE GIFT. Though the quality doesn’t quite live up to its predecessor, the story engages with positive values and uplifting messages that families will appreciate. The movie gives much more background to THE ULTIMATE GIFT, showing how Red developed his friendships, his business and the “Twelve Gifts” he passes onto Jason.

The strong Biblical worldview upholds values like capitalism. Red learns that success comes from hard work and being a leader of men. He also earns success rather than taking it away from a wealthy person. Most importantly, the movie teaches that family is the greatest legacy you leave behind. THE ULTIMATE LIFE has no objectionable content, though a light battle scene might frighten young children.

Rent or Buy THE ULTIMATE LIFE: