"Trying to Overcome the Past" 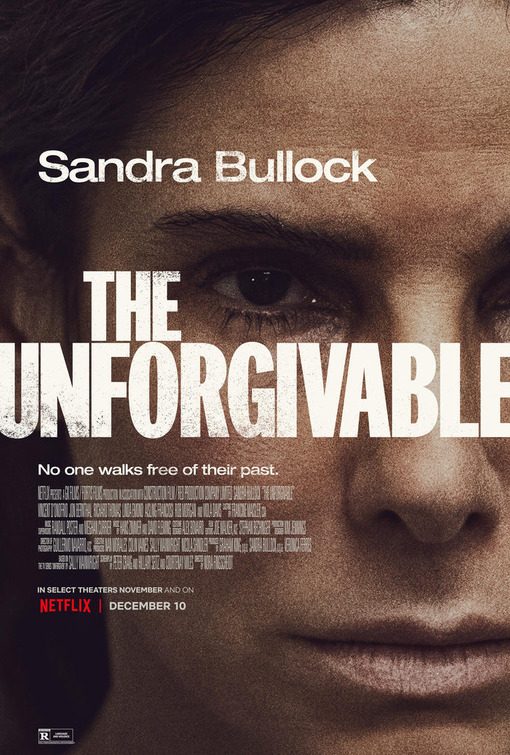 THE UNFORGIVABLE stars Sandra Bullock as a woman who emerges from prison after serving 20 years for second-degree murder. Ruth Slater tries to resume her life, but everyone seems to turn against her. She tries to reconnect with her 25-year-old sister, finds a second job as a carpenter for a homeless center and tentatively builds a romance with a worker at the fishery where they work. However, the two sons of the man she shot dead want revenge. Can Ruth find a way to happiness and restore her relationship with her sister? Or, is she doomed to failure, despair and death?

THE UNFORGIVABLE is powerful for its unflinching, unsentimental look at a woman who’s been turned hard by terrible circumstances beyond her control. Sandra Bullock delivers a superb performance, maybe her best one yet. Director Nora Schingfeidt brilliantly handles the multiple plot threads. She provides a sympathetic eye on every character’s emotions. Ultimately, everyone tries to do the right thing. THE UNFORGIVABLE has lots of strong foul language and bursts of intense violence. So, MOVIEGUIDE® advises extreme caution for adults.

(BBB, C, LLL, VVV, S, N, D, MM):
Dominant Worldview and Other Worldview Content/Elements:
Very strong moral worldview with light redemptive content where woman tries to make amends for her violent past and struggles to win and eventually gain forgiveness from those she wronged, plus a stunning plot twist reveals she’s made an incredible sacrifice already in her past, but the movie nonetheless is gritty in its depiction of seriously angry people who lash out in violence when pushed
Foul Language:
At least 31 obscenities (including 15 uses of the “f” word), three Jesus profanities and two light obscenities
Violence:
Flashbacks show a sheriff shot by an unseen shooter and then lying in a pool of blood, woman attacks another woman for rifling through her possessions and pins her down on a bed before throwing her against a wall and then throwing a box at her, woman punches another woman hard in the face and knocks her down before kicking her hard in the head twice and the stomach, man catches his brother engaging in adultery with man’s wife and kicks him in the face before beating him in the head, man holds a gun against a woman’s head but stops before pulling the trigger, and woman smashes objects and walls at a construction site she’s working on while in a fit of anger
Sex:
Man is caught having adulterous intercourse with his brother’s wife (no graphic depicted sex, it’s just understood as he leaps out of a bed and then begs for mercy)
Nudity:
Woman is seen taking a shower from behind, her bare shoulders implying she’s nude but that’s all that is shown, and a man is shown bare chested and in boxers after leaping out of bed where he was having adulterous sex
Alcohol Use:
No alcohol use
Smoking and/or Drug Use and Abuse:
No smoking, a woman is seen about to tie her arm off for heroin shooting but stops herself, and another woman shows her bare arms to her parole officer to prove she’s not shooting drugs; and,
Miscellaneous Immorality:
Strong miscellaneous immorality include numerous arguments are intensely portrayed (although most relationships are healed by the end), some people don’t forgive the title character even as she has done her time and deserves a second chance, men stalk a woman, and a woman lies to convince a lawyer to talk to her.

The plight of convicts trying to restart their lives is given a powerful portrayal in Sandra Bullock’s latest film, the Netflix theatrical drama THE UNFORGIVABLE. Playing a woman named Ruth Slater who has served 20 years in prison for killing a sheriff who came to foreclose and take her from her house, Ruth emerges to a whole new world (she’s never dealt with a cellphone before) and tries to get her life going again even as everyone seems to turn against her.

The movie has a solemn, thoughtful tone throughout even as it ratchets up the tension as events turn worse for Ruth. It also brilliantly interweaves flashbacks throughout to parcel out information about what happened on the day she killed the sheriff. Ruth has a tough-minded parole officer who gets her a hardscrabble job working in a fish-processing plant and a bunk bed in a horrific hovel in Seattle’s Chinatown.

Ruth is warned not to make contact with anyone from her past, but Ruth wants to track down her sister Katie, who was just five years old on the fateful day they were torn apart by the cops arresting Ruth. Katie has a new foster family now and a stepsister named Emily, who comes across a stash of letters Ruth had written Katie that were hidden by the foster parents for two decades.

Ruth pulls down a second job as a carpenter for a homeless center. She tentatively builds a friendship that seems headed for romance with a fellow fishery worker. However, trouble looms, as the two now-grown sons of the dead cop want revenge for Ruth killing their father and managing to restart her life.

Can Ruth navigate a relationship and find a way to happiness and perhaps restore her relationship with Katie? Or, is she doomed to failure, despair and death?

THE UNFORGIVABLE is powerful for its unflinching, unsentimental look at a woman who’s been turned hard as stone by terrible circumstances that are revealed to have been beyond her control. Bullock is a revelation here, surpassing even her Oscar-winning turn in THE BLIND SIDE as she takes Ruth on a rollercoaster of emotions that never feel forced. When she lashes out in violence in a couple of scenes, the effect is startling coming from a woman normally seen as America’s sweetheart.

Director Nora Schingfeidt brilliantly handles the multiple plot threads and provides a sympathetic eye on the emotions of everyone involved, including Ruth for the aforementioned reasons, Katie’s foster parents who are scared of shaking her up again, the lawyer and his initially antagonistic wife, and the two brothers who’ve had their lives defined by pain since their father’s death.

In that respect, THE UNFORGIVABLE recalls the brilliant DEAD MAN WALKING, the 1996 Oscar-winning MOVIEGUIDE® Award winning drama film based on a true story about a Catholic nun trying to bring a death-row inmate to confession and forgiveness before he’s executed. This movie has the same level of power, only slightly lessened by the fact it’s a fictional story based on a TV series.

THE UNFORGIVABLE shows everyone ultimately trying to do the right thing and for that reason has a strongly moral worldview. It also shines a light on the struggles far too many convicts face ultimately after doing their time, trying to make it in the real world again. THE UNFORGIVABLE has lots of strong foul language and bursts of intense violence, so it’s only for recommended mature adults, with extreme caution.