"Too Subtle for Its Own Good" 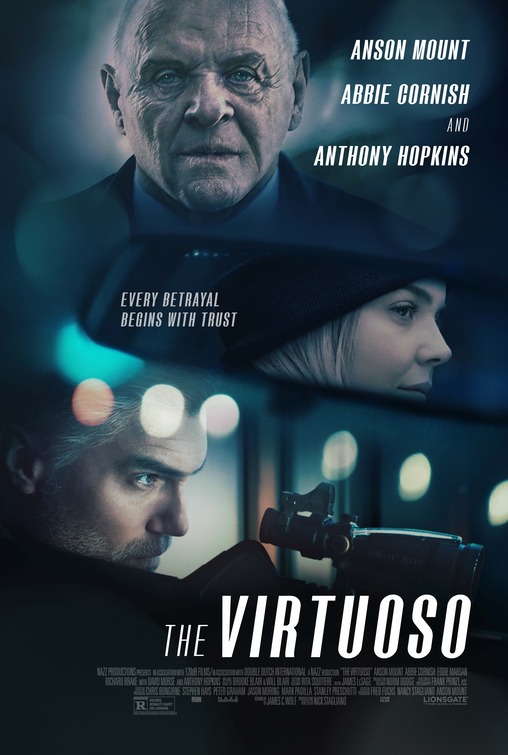 THE VIRUOSO is an emotionally stagnant hitman who runs into trouble when he’s given a rush assignment and accidentally kills an innocent bystander in addition to his target. The bystander’s death haunts the hitman, who gives viewers a rundown on the rules of being a hitman and a narration of his plans, thoughts and actions. The hitman’s mysterious boss gives him a new assignment, but he only knows the place, the time and a cryptic name, White Rivers. His assignment takes him to a small diner in a small resort town. There, he encounters two men obviously carrying concealed weapons, a sheriff’s deputy, and a pretty waitress.

THE VIRTUOSO is a disturbing, well-acted crime thriller. Oscar-winning actor Anthony Hopkins adds some class as the hitman’s mysterious boss. THE VIRTUOSO has a strong, but somewhat neutral, nihilistic worldview. There are some moral elements suggesting that having moral values is a better life. However, they are a bit too subtle to make a big difference. THE VIRTUOSO also contains extreme violence, strong but brief foul language, and two gratuitous bedroom scenes with explicit nudity.

(HH, B, APAP, LL, VVV, SS, NN, A, DD, M):
Dominant Worldview and Other Worldview Content/Elements:
Strong nihilistic humanist worldview, with some too subtle moral elements, about a cold-hearted professional hitman who starts having pangs of emotion, guilt and morality when he befriends a stray dog near his cabin and accidentally kills a mother during his latest assassination job for the mob, but it puts his life in danger, plus a story is told about a fictional massacre of civilians by American troops, which gives the scene an Anti-American flavor
Foul Language:
Five obscenities (four “f” words), two GD profanities, three light profanities
Violence:
Some extreme bloody violence and strong violence includes four people shown being shot dead, the corpses of two of those people are shown with holes in their heads, the corpse of another person with a hole in his head is shown, blood on a wall is shown, a man is accidentally overdosed and dies of a heart attack, hitman shoots tire of a car and car crashes into an RV van, and they explode, explosion sets woman on fire, and she’s engulfed by flames, a story is related about a massacre of some civilians during the Vietnam War and the shooting of a little boy who survived, and woman points a gun at a dog, but she doesn’t fire
Sex:
Two scenes of depicted fornication, and waitress makes a light verbal pass at a stranger
Nudity:
Upper female nudity during two scenes of depicted fornication, and some images of upper male nudity
Alcohol Use:
Brief alcohol use
Smoking and/or Drug Use and Abuse:
No smoking, but hitman slips some drugs into another hitman’s drink to fake a heart attack, but the other hitman was taking heart medicine already, and he dies of a real heart attack; and,
Miscellaneous Immorality:
Story is about a professional hitman, betrayal occurs, gangland slayings occur.

THE VIRUOSO is an emotionally stagnant hitman who runs into some trouble when he’s given a rush assignment and accidentally kills an innocent bystander in addition to his target. THE VIRTUOSO features Anthony Hopkins as the hitman’s boss and is a disturbing, provocative, well-acted look into the empty life of a professional hitman, but there’s only a few nods to any kind of moral sentiment, and the movie contains extreme violence, strong but brief foul language, a fictionalized account of a massacre of civilians by American troops, and two gratuitous bedroom scenes.

The movie is narrated by Anson Mount, who plays the nameless professional hitman. As the movie goes along, the hitman gives viewers a rundown on the rules of being a successful hitman and of his plans, thoughts and actions as he completes two assignments. In between jobs, the hitman relaxes at his comfortable cabin somewhere in the woods. The only sign of human emotion in the man is when a large white dog visits the cabin, and the hitman feeds the dog.

His boss, an old, retired military man played by Anthony Hopkins, gives him a mob hit of an up-and-coming CEO. However, he only has 48 hours to do the job, which means the hitman has very little time to plan the murder. Even worse, he has to make the assassination look like an accident. Before he leaves for the job, the movie reveals that the hitman is now actually buying dog food to feed his canine visitor.

The hitman decides to kill the CEO by shooting out the front tire of the man’s car. However, before the car approaches, a woman and her young son step out of building where the CEO works. They start to kick around a soccer ball. Then, when the hitman shoots out the car tire, the car swerves and hits a small RV van parked on the street, and the resulting explosion set the mother on fire, engulfed in flames. Despite his cold, professional attitude toward his nefarious line of work, the incident haunts the hitman, and he stops taking calls from his boss, who wants to know how things went on the CEO’s murder.

Several days later, the hitman is standing at the grave of his father, who served with his boss during the Vietnam War. The boss appears and tells a story about their participation in a massacre of civilians in Vietnam. He says neither he nor his father questioned the order by their leader to force the civilians in a ditch and kill them. However, when a young boy, sheltered by his mother, survives the massacre and tries to run away, the hitman’s father couldn’t bring himself to shoot the boy even though the commanders orders them, “Plug him.” The boss said he had to do it. Following orders is what soldiers do, he tells the hitman. So, “Answer your [expletive deleted] phone,” he orders.

The hitman gets another mob job from his boss. He doesn’t mention the target’s actual name; just gives him a piece of paper saying, “White Rivers” and “Rosie’s 1700.” When he travels to the location for the job, he finds a small rural town in the mountains with one motel and a small diner called Rosie’s Café. Before entering the diner at a few minutes before 5 pm, he takes photos of all the license plates in the little parking lot.

In the diner, besides the pretty blonde waitress, he finds only a middle-aged man at the bar and a younger, longhaired man making time with a woman seated at one of the tables. Both men appear to be carrying weapons, the hitman narrates. While the hitman sits drinking coffee and checking the license plates on his phone, a deputy sheriff enters and eats a pastry at the bar. The hitman asks the waitress, who’s name is Dixy, if she knows anything about “White Rivers,” and she says she doesn’t. The hitman doesn’t like the deputy being in the diner with the two gunmen. So, he decides to leave the diner to reassess what’s happening. Before he leaves, he asks Dixy when the diner closes. She says, usually at 9 pm if things aren’t too slow. He tells her maybe he’ll stop by later to get something to eat.

The hitman waits in his room while listening to the gunman next door watch TV. When the TV goes off, he peers outside and sees the gunman leaving his room to get some ice. So, he sneaks into the gunman’s room, quickly searches the room and mixes Viagra and nitroglyscerin in the man’s whiskey. The drug cocktail is supposed to mimic a heart attack, so that the hitman can interrogate the gunman under duress.

The gunman returns but doesn’t notice the hitman standing in the corner while he puts some ice in his whiskey and takes a drink. However, he does notice the hitman when he goes to turn the TV back on with the remote. The gunman says he doesn’t know anything about a place called White Rivers, even when he starts feeling the pain from the drugs. The hitman starts to ask him more questions when the gunman grabs his chest in pain, collapses and dies. Apparently, the hitman narrates, the gunman was already taking some heart medicine, a lethal combination when mixed with the drugs he slipped into the gunman’s drink.

The hitman decides to question the young longhaired man and the woman after midnight. He figures the young man is at the house of the young woman, who owns a property nearby. So, he decides to visit the diner again and get something to eat from the friendly waitress, Dixy. The hitman grows suspicious when the waitress turns out to be too friendly. He also learns that the deputy sheriff may not be who he says he is.

THE VIRTUOSO is a disturbing, provocative, well-acted crime thriller. The filmmakers have hired Oscar-winning actor Anthony Hopkins to play the hitman’s boss. He lends a touch of class to the movie, which features good acting from the rest of the cast as well, including Anson Mount as the title character. It quickly becomes clear that the hitman is an emotionally stagnant, cold-hearted killer. The hitman even has to practice smiling in front of a mirror to help him appear friendly to civilians, especially if he wants to get any information out of them. Thus, the movie’s story is about how the hitman’s tough exterior cracks under the guilt form killing the mother and under the strain of more normal human interaction.

Sadly, the script inserts a monologue by Hopkins about his character taking part in a massacre of civilians by American troops during the Vietnam War. In reality, although one of the examples is disputed, there are only four examples of such massacres by American troops during the Vietnam War, while communist troops reportedly engaged in six, killing about 4,000 more people, 6,900 civilians versus 2,500 civilians. In the monologue, Hopkins’ character says the only duty of a soldier is to obey orders, but American servicemen are regularly trained that they don’t have to obey an unlawful order, including any order that calls on them to murder an unarmed civilian in cold blood.

THE VIRUOSO has a neutral kind of worldview that’s a bit nihilistic. The ending, up to and including the last scene, implies that the hitman’s newfound concern for the white dog and for the death of the mother is a dangerous and very deadly emotion for him to have. However, the message is too subtle and not very uplifting, because it also tells viewers that, if you want to be a successful hitman, don’t let ANY emotions or moral concerns intrude on your job. Ultimately, the positive moral suggestions in THE VIRUTOSO are too subtle and too few and far between to make any difference. They don’t leave viewers with enough of an impact to come to any really positive conclusions.