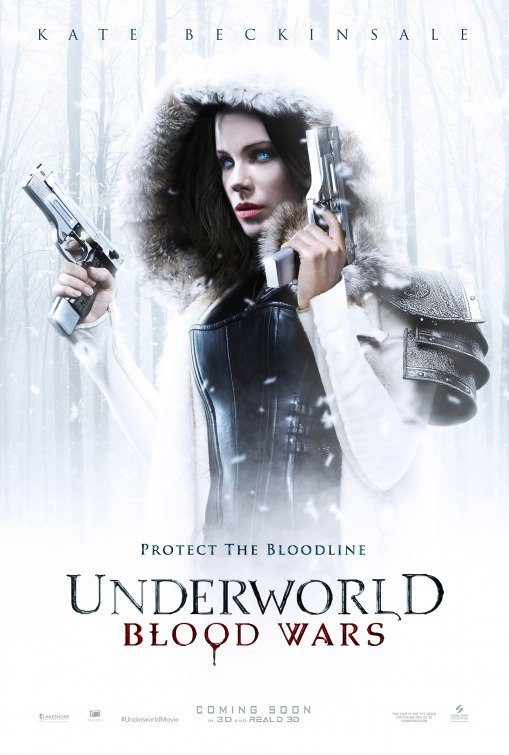 UNDERWORLD: BLOOD WARS continues the vampire versus werewolves franchise. The vampire warrior Selene’s daughter is hiding from the world, because her blood is considered pure enough for the werewolves to want her gone. So, Selene sets off to end the war between vampires and werewolves, which can only be done using pureblood. While Selene searches for her daughter, she gets into a run-in with werewolves sent to stop her. So, it’s now up to the vampire council to help Selene end the war.

Not much is done to boost the UNDERWORLD franchise’s storytelling quality. BLOOD WARS puts more emphasis on its intense, R-rated action scenes than trying to make its story and acting more convincing. Although the movie has a few moral, redemptive themes, it depicts too many negative elements in a positive light, such as sexualizing women and drinking blood to live forever on Earth. UNDERWORLD: BLOOD WARS also has plenty of foul language, extreme bloody violence, some sexual immorality, a reference to evolution, and a strong pagan worldview. MOVIEGUIDE® finds BLOOD WARS to be excessively immoral and unacceptable.

(PaPaPa, RoRo, OO, B, C, Ho, Ev, LL, VVV, SS, N, A, M) Very strong, sometimes mixed, pagan worldview with supporting Romantic, occult elements that honor the idea of immortality on earth through the lens of mythical vampires as the heroes, plus some moral redemptive, allegorical elements such as talk of a chosen one’s blood restoring life to other vampires, and, although not biblical, the heroes rely on the legacy and commitment of their families to restore a proper order to their world against the werewolves, plus homosexual element when two women kiss, and the subject of evolution is mentioned in a description of the history between vampires and werewolves; 22 obscenities (mostly “s” words with one “f” word); very intense, often bloody, gory and somewhat scary battle scenes include internal body parts graphically exposed, depicted decapitation, guns and swords cause violent wounds and impalements, plenty of hand-to-hand combat, a person disintegrates into ashes, and surgical scenes are rather gruesome; briefly depicted fornication during flashback, two women kiss, implied oral sex, heterosexual cuddling, and many women wear very revealing clothing and only for the sake of sexualizing their appearance; upper male nudity and women wear revealing clothing; alcoholic drinks are seen briefly, but its effects are never shown, although blood could be seen as similar to alcohol in this world; no smoking or drug use; and, the transformations of humans to werewolves are very scary.

UNDERWORLD: BLOOD WARS is the sequel to UNDERWORLD: AWAKENING, a continuation of the vampires vs. werewolves franchise that doesn’t know when to quit.

The vampire warrior Selene continues her battle against the werewolves. Her daughter is hiding from the world, because her blood is considered pure enough for the werewolves to want her gone.

So, Selene sets off to end the war between vampires and werewolves, which can only be done using pureblood. While searching for her daughter, she gets into a run-in with some werewolves sent to stop her and her daughter.

Selene goes to the vampire council, pleading for their help. She begins a training session for the other vampires in how to kill the werewolves, but this only leads to a greater opportunity for the enemy to locate her and the rest of the council. Meanwhile, her partner, David, is in a period of self-denial in terms of his father’s recent fate against the werewolves and must find out what his parents wanted from him.

As for the vampire council, its leader is committed to finding her own means of stopping the war. She wants to do this through Selene’s blood, which she knows will offer the right immortality guaranteed to make the rest of the council unstoppable.

UNDERWORLD: BLOOD WARS doesn’t do much of anything to boost the franchise in terms of quality. The acting is more awkward than ever before, and the story is as nonsensical as it is incoherent. The battle sequences, though thrilling enough, are still far too graphic for anyone under the age of 15, making the movie’s R-rating well deserved. BLOOD WARS also continues to promote a false, pagan worldview that makes the idea of immortality on Earth a healthy fantasy worth making sacrifices, worth seeking and worth achieving.

There are also plenty of edgy moments depicted in a glorious light, including a super brief sex scene and a kiss between two women. It is clear through the choice of wardrobe on many of the women that they were cast purely for the sake of looking good, rather than for their actual acting ability.

That is exactly why the poor acting and blank line deliveries makes UNDERWORLD much more dangerous for impressionable viewers. It means they will joyfully take in the media while mentally seeing themselves in the characters’ places, because the absence of on-screen personality allows room for viewers to fantasize about their own personalities filling in the blanks of the action on the screen. Not to mention the fact that nobody in the cast looks unattractive (even after a long sword and bullet fight), thus promoting an unhealthy desire to look as gorgeous as the stars in Hollywood.

There are a couple moral, redemptive themes, such as commitment to family values and legacy, knowing what’s worth the fight, and some Christological metaphors having to do with blood. However, these themes are undermined by the desire to make the most out of life on earth, even if it means living forever until you are satisfied.

People need to understand that this flesh-and-blood life is not all there is. A whole eternity of everlasting joy awaits us in Heaven with our Lord and Savior, an invitation that waits for us once we accept the sacrifice made by Jesus Christ to defeat our sins. No amount of human blood can be shed and drunk to make you physically live forever. Only the pure, spotless blood of Jesus can make that happen.

Because of the movie’s extreme violence, strong foul language, some sexual immorality, a mention of evolution, and Romantic, pagan view of what it means to leave a historical legacy, MOVIEGUIDE® finds that UNDERWORLD: BLOOD WARS is excessively immoral and unacceptable.