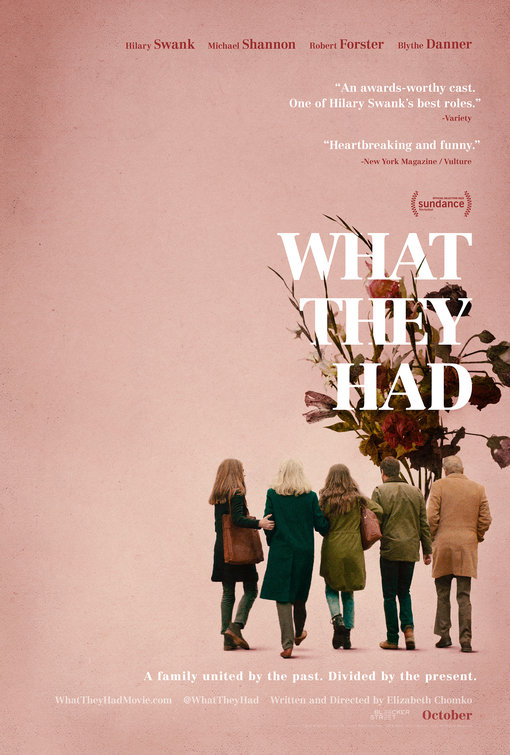 WHAT THEY HAD begins on a cold December. Bridget receives a distress call from her brother, Nick. Their mother is missing, wandering the streets of Chicago alone in the snow. The mother has Alzheimer’s and seems to be getting worse. Bridget returns home to help and finds the family torn in making a decision on what to do with her mother. Bridget’s father believes he can provide the best care for her, because he loves her, but Nick believes the best place for her is with assisted living.

WHAT THEY HAD depicts a real family with real problems as they argue among each other while also their love for one another. The struggles of a family dealing with a mother and wife who doesn’t remember who they are half the time are beautifully depicted. The audience can’t help but feel sympathy for these people. There is much laughter and a few tears in WHAT THEY HAD. However, it also has a high number of gratuitous obscenities and strong profanities, along with some other objectionable content. MOVIEGUIDE® advises extreme caution for WHAT THEY HAD.

(CC, BB, FRFR, Pa, LLL, V, S, N, A, D, MM):
Dominant Worldview and Other Worldview Content/Elements:
Strong Christian and moral, but sometimes antinomian, worldview about a Catholic family struggling with and arguing about a decision about what’s the right thing to do for their mother who has a severe case of Alzheimer’s, with family members facing a decision to set aside their own desires to do what’s best for someone else, family members make sacrifices for one another (sometimes begrudgingly), family attends Catholic mass and prays before dinner, and scenes are set during Christmas, but there’s a lot of strong foul language;
Foul Language:
At least 52 obscenities (including more than 10 “f” words) and 25 profanities (12 GDs and several involving a references to Christ), and woman with Alzheimer’s makes an obscene gesture to another church member during a service;
Violence:
Nurse tests for a sexual assault;
Sex:
Married woman dissatisfied with her marriage kisses another man, but they are interrupted when she tries to seduce him lightly, adult man says his Alzheimer’s affected mother hit on him, a comment about self-abuse, and when a mother and daughter take a shower, the daughter tells her mom to wash her “hoo-hoo”;
Nudity:
Husband and wife lie in bed together, and the husband is not wearing a shirt, and a mother and daughter are in the shower together as the daughter helps her mom wash her hair, but only shoulders and above are shown;
Alcohol Use:
Characters have a drink occasionally throughout the movie, one character owns a bar, and his sister and father come in for a drink, college girl was kicked out of her dorm for drinking, and a husband tells his wife that she got drunk on Christmas, but no shown drunkenness
Smoking and/or Drug Use and Abuse:
Cigarette smoking but no drugs; and,
Miscellaneous Immorality:
Moderate amount of miscellaneous content including a high amount of family dysfunction, a daughter is extremely disrespectful to her mother, a father and son constantly bicker, siblings fight with each other, man is very disrespectful to older woman and tells her to go sit on her rose bushes, niece is very disrespectful to her uncle and calls him derogatory names, bad role models, man struggles with taking his relationship with his longtime girlfriend to the next level, and some mild moral relativism.

In WHAT THEY HAD, a woman in Los Angeles must return home to Chicago after she receives an urgent call from her brother, asking for help with their mother ridden with Alzheimer’s. WHAT THEY HAD is filled with heart and lots of laughter in its portrayal of a dysfunctional but loving Catholic family, but it has a high number of gratuitous obscenities and strong profanities, plus some other objectionable content, which warrant extreme caution.

The movie begins with a distressing phone call from a scared father, who wakes up in the middle of the night seeing that his wife, who has Alzheimer’s, is missing. Their daughter, Bridget, immediately returns to Chicago with her daughter to help out her brother, who has been taking care of his parents for a while now. They find their mother in the hospital after she was miles away riding the trains for hours. The nurse expresses how dangerous it is for a woman her age to wander around by herself at night. She also conducts a pelvic exam to ensure she wasn’t assaulted sexually.

After the family realizes the gravity of the situation, the son Nick implores his sister, Bridget, to convince their father to put their mom in an assisted living home. Bridget, who has always been a people pleaser with everyone, including her parents, wants to make sure her father is happy with the decision that’s made. He feels, however, that he’s the best assisted memory his wife could possibly have, because they’ve spent almost their entire lives together.

As power of attorney, Bridget is the one who must make the final decision. She sees the love her parents share, but she also sees how difficult it is for her father to care for her mother 24/7. While trying to make this tough decision, she’s also realizing how unhappy she has been in her own marriage for years. She uses an excuse to not wear her wedding ring and partially blames her father for convincing her that her husband is the best thing that happened to her.

WHAT THEY HAD shows a family that comes very close to being real. They are faced with tough decisions, regrets, feeling inadequate, and at the bottom line knowing that their arguments are based out of love. There’s a character in this movie with whom anyone can identify or sympathize. Although there are a few clichés, WHAT THEY HAD is full of heart and laughter. The family dysfunction is something that every family deals with in one capacity or another and is displayed in a very truthful way on screen. Ultimately, the movie has a strong Christian, moral worldview where the dysfunctional Catholic family makes sacrifices for one another (sometimes begrudgingly) and attends Mass and prays together before dinner. Although the family fights, they are still famil and they realize that the arguments really stem from how much love they have for each other.

That said, WHAT THEY HAD has a high number of gratuitous obscenities and strong profanities, about 80 or more. Also, there are many scenes of dysfunction and disrespect, plus some light sexual immorality. MOVIEGUIDE® advises extreme caution for WHAT THEY HAD.