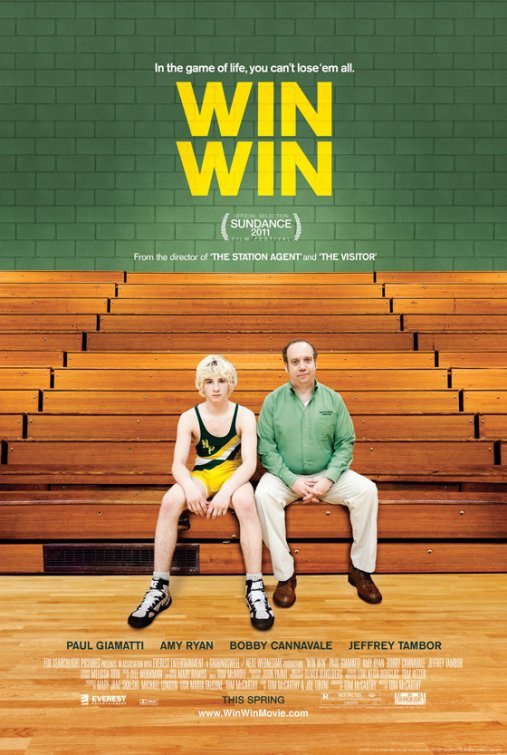 WIN WIN is an ultimately uplifting comedy that also deals with some serious, dramatic, heartfelt issues, but it has too much foul language. In the story, a struggling New Jersey attorney, Mike, coaches a high school wrestling team on the side. Mike sees an opportunity to make more money to support his wife and children, but it involves some unethical activity regarding a senile rich client. Then, the client’s long-lost teenage grandson shows up, having run away from his mother in Ohio. Mike discovers the teenager is a talented wrestler, so the teenager joins the team. Just as it looks like Mike will get a double payday, the boy’s mother shows up fresh from drug rehab, threatening to derail everything.

WIN WIN is a very funny, winsome, heartwarming slice-of-life comedy. The movie features superb acting and great writing and directing. Despite a heart-tugging, uplifting ending, however, the movie has way too much foul language, including some strong profanities. In fact, it has enough strong foul language to earn an R rating. This is the biggest downside to the movie. All in all, therefore, MOVIEGUIDE® advises extreme caution for WIN WIN.

(C, B, LLL, V, S, N, A, DD, MM) Light Christian, moral worldview where flawed protagonist lies to get money but repents and does good when he’s eventually found out, with a brief scene set in a Christian church showing a stained glass window from the Bible and Bibles in the pews where the people are sitting, but marred by lots of strong foul language by the adult characters and two “s” obscenities by a child, one of which is rebuked by her father when he hears it (worldview would have been stronger without the foul language and with more overt Christian content); at least 59 obscenities, five strong profanities, seven light profanities, and man shown using plunger on toilet at least twice; light violence includes high school wrestling practices and matches, teenage boy wants hard slaps on side of wrestling helmet to psyche him up for matches, upset teenage wrestler is disqualified after twice shoving opponent in a way that breaks the rules, and some scuffling and fighting; no sex scenes but some marital kissing and protagonist’s friend suspects divorced ex wife is having an affair with a building contractor who comes to their old house to work; brief upper male nudity in wrestling scenes and rear male nudity when friend makes protagonist take cell-phone photo of friend “mooning” for his ex wife; alcohol use; smoking and mother of teenage character is said to be in drug rehab; and, lying to get money but rebuked, lying to save money, fraud but rebuked, attorney skirts around judge’s ruling which he himself had originally requested but he eventually does the right thing, teenager runs away, teenager hates drug addicted mother but they eventually reach a reconciliation, and woman and her opposing attorney try to skirt the law to get money but they eventually both do the right thing.

WIN WIN is an ultimately uplifting comedy that also deals with some serious, dramatic, heartfelt issues, but it has too much foul language.

The story focuses right away on Mike Flaherty, played by the talented Paul Giamatti. Mike is a struggling New Jersey attorney with a family and a hurting practice. Even the toilet in his little office keeps failing, so, rather than spend money on a plumber, Mike fixes it himself.

To make ends meet, Mike decides to become the guardian of a wealthy senile old man named Leo. This is so Mike can get the $1,500 the state pays Leo’s guardian.

However, instead of letting Leo stay in his own house like Mike promised the judge and Leo himself, Mike sticks Leo in a nearby nursing home. He even lies to Leo, telling him the judge ordered Leo to be put into the home.

Then, Leo’s long-lost teenage grandson, Kyle, shows up. Kyle has never met his own grandfather. Also, he has just run away from his drug-addicted mother, now in rehab in Ohio. The mother had had left no trace for anyone of what happened to her when she and Leo became estranged years ago. Mike, of course, lies to Kyle too about Leo’s situation and the money he’s making on the side (he has already neglected to tell his loving but feisty wife, Jackie, about it).

Feeling guilty, however, Mike lets Kyle stay in the basement at his family’s house. They try to contact Kyle’s mom, but she doesn’t return their phone calls. Mike and his family learn that Kyle is a quirky, but very nice, young man, so Mike shuttles Kyle back and forth to visit his grandfather and be with Mike as he and another attorney, “Vig,” coach a local high school wrestling team.

[SPOILER ALERT] It turns out that Kyle is actually a star wrestler who stopped wrestling because of his own problems and that of his mother’s. Mike and Mike’s old wrestling buddy, Terry, are excited to learn this. So, Terry joins Mike and Vig as coach, while Kyle clearly has fun getting back into a high school wrestling program.

Just as it looks like Mike will get a double payday or benefit, Kyle’s mother suddenly shows up, threatening to derail everything. Will Mike finally do the right thing? Can Kyle get over his hatred for his irresponsible mother? Will Mike’s wife (not to mention Kyle) forgive him when she learns the truth about her husband’s bad decisions?

WIN WIN is a very funny, winsome slice-of-life comedy. Despite the protagonist’s unethical shenanigans, the movie creates some sympathy for Mike, mostly because Mike clearly cares about his own family. Also, he has a great loving, ethical wife, played wonderfully by Amy Ryan. The rest of the cast, including Giamatti, do a superb job, as does Writer/Director Tom McCarthy (THE VISITOR and THE STATION AGENT). Eventually, the characters doing bad do the right thing, but not before the comedy and the drama involves some tense and uncomfortable, but tender, warm and funny, moments dealing with family issues and issues of honesty, integrity, compassion, and love.

Although WIN WIN has a morally uplifting, very touching ending, it has way too much strong foul language, including some strong profanities. In fact, it has enough strong foul language to earn an R rating. This is the biggest downside to the movie, which could have appealed to a much bigger audience if it had cleaned things up to get a PG-13, or even a PG, rating.

All in all, therefore, despite the positive content, including a good but all too brief church scene and no sex scenes, MOVIEGUIDE® advises extreme caution for WIN WIN. We hate to be a bit corny and obvious, but this movie is clearly a “Lose Win” situation.