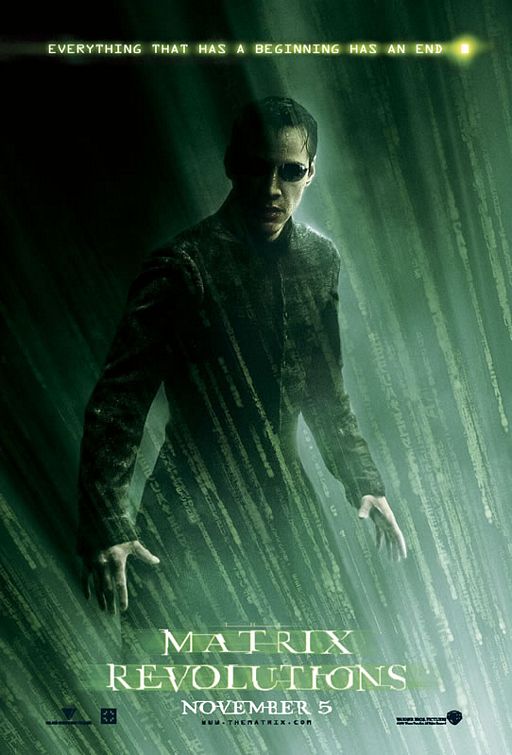 THE MATRIX REVOLUTIONS concludes THE MATRIX trilogy with an action-packed, but excessively violent, story of the final battle between machines and humans, with some of the humans hoping for deliverance from a possible messianic figure in the form of Neo, played by Keanu Reeves. The movie’s Christian allegory and strong moral values ultimately overcome blatant false theology, humanism, lots of strong violence, and purposeless profanities.

(CC, BB, PP, PaPa, FrFr, H, HoHo, LLL, VV, S, NN, A, D, M) Ultimately redemptive, Messianic, Christian allegory, including some symbolic Christian imagery and references such as images of a Cross made up of light, a reference to sacrificial atonement combined with another use of crucifix imagery, an emphasis on the need for a savior to defeat evil and darkness, and light overcomes darkness (as in John 1:5), with ontological realism regrettably mixed with ontological dualism where actions have real consequences in a real world (characters can really die) and the physical world affects non-material entities (the hero travels into a world of illusion (which is not the supernatural world with a real ontology) where he can fight real evil) but non-material entities can affect the physical world (the hero and heroine use the non-material love between them to combat real physical threats and the hero uses his connection to the non-material Matrix to also combat real physical threats); movie also strongly extols moral, biblical values and concepts such as truth, freedom, hope, love, faith, peace, human life, courage, sacrifice, and patriotism, as well as strongly undermines nihilism and totalitarianism, represented by the villains, seriously marred by some overtly proclaimed New Age pagan, Hindu pagan elements and humanist references, such as Monism proclaimed, false definition of karma, philosophical talk about knowledge, making choices, and choosing directions, computer program appears as little girl in computer “matrix,” a world created by machines and computers, and manipulates sun image in matrix, like something out of the movie TRON, and other characters can manipulate entities in the movie’s fantasy computer world, the Matrix, which resembles the physical world, possible implied attack on or promotion of homosexuality and sadomasochism by associating them with a major, nihilistic villain who disdains love; excessive foul language contains about 22 obscenities and 15 strong profanities; excessive violence such as much indiscriminate gunfire, martial arts fighting, screaming humans operating machines fire at evil machines trying to destroy all humans, flying superhero battles super villain in sky and they pummel each other into buildings, bricks, and asphalt, stabbing, man blinded by electric power applied to face, man’s face scarred to a bloody pulp by machines that attacked him, man’s face is bloody with broken nose after fighting, decapitations, impalings, and men spit blood; suggestive bisexual dancing in sadomasochistic bar where some men appear to be fondling other men, woman fondles another woman’s breast, and sadomasochistic leather paraphernalia, but this perverse scene is associated with a major evil villain although not overtly condemned; brief, obscured upper female nudity and tight casual clothes around women’s breasts; alcohol use; smoking; and, movie implicitly rebukes repression, conceit, nihilism, and selfishness while extolling many positive moral values, but much apparent philosophical and theological confusion.

The Light Shineth in Darkness; and the Darkness Comprehended It Not

Thanks to loony, leftist professor Cornell West, according to the newspapers, the second MATRIX movie took a left turn into Marxist philosophy, with some anti-Christian symbolism. The good news is that MATRIX REVOLUTION returns to its basic salvation story, reflecting on the influence of, and the longing for, a messianic savior. This myth is complete with Neo, a messianic figure takes upon Himself the sins of others, dies to bring peace to the world, although there is no sign of resurrection – yet. Regrettably, Neo is a deeply flawed messianic figure who is not only not divine but who also has deeply sinful traits as seen in the previous movies, unlike the true Messiah Jesus Christ,

Regrettably, the myth is presented with much apparent philosophical and theological confusion. These pop philosophy barnacles weigh the story down, instead of lifting it up, and include references to existential, blind faith and an all-too-human messiah, as well as very pointed profanities. In spite of these very disturbing theological and philosophical flaws, the movie supports strong values such as truth, love, hope, faith, and peace.

The movie opens with Neo stuck in a subway station, stuck between the Matrix and the Machine World, and controlled by the Trainman. The Trainman answers to the Frenchman, an evil computer program that appears human in the Matrix. Trinity, Morpheus, and Sharif, a computer program who protects the rebellious computer program known as the Oracle, go to rescue Neo. In the midst of this rescue, there are several false philosophical points made, like words don’t have real meaning, they mean what you want them to mean. This is especially troubling with a misinterpretation of Karma, which in the Hindu religion is a very negative term, but in the movie is presented as simply a type of fatalism. The talk about karma, however, leads into talk about the importance of love, which is defined as making positive connections to other beings. This is very interesting because the biblical meaning of sin, which is the antithesis of love, can be looked at as a break in our loving relationship with God, our Creator, and a break in our loving relationship with our fellow human beings.

Killing with reckless abandon and glee as they go, Trinity, Morpheus, and Sharif find the Frenchman in the midst of a bisexual, homosexual, sadomasochistic party. Whether this is the playboy shot, or a condemnation of it, may be unclear, but the fact remains that the party occurs in the dark, evil lair of the Frenchman, whose nihilistic attitude is overtly rejected by Morpheus and Trinity.

After they rescue Neo, the four of them join a rescue mission to locate and rescue the earth craft, Logos. Meanwhile, Zion is about to be penetrated by the machines. Tremendous personal battles as well as wide-scale communal battles take place, and finally Neo goes off with Trinity to the city of the machines, to try to bring peace, but the evil computer program known as Agent Smith has plans of his own.

Somewhere amidst all the action violence is a plot. There are moments where the plot becomes so weak that the movie may become tedious and boring for many viewers. However, once Neo’s goal is well defined, the movie takes off – with a countdown to rescue Zion before machines kill all the human beings. The final battle also has to take place within the Matrix, as Neo confronts the opposite of himself, Agent Smith, who has become a figurative Anti-Christ.

Except for the suggestive dancing scene in the nightclub of the Frenchman, the sex is significantly toned down in THE MATRIX REVOLUTIONS. Although the philosophical musings are confused, and often contrary to Christianity, the final outcome fulfills the basic soteriological messianic story of a Christian allegory, except that this messiah is all too human and not at all divine. In some ways, the blood and violence is much more intense than the two previous movies, but it doesn’t approach the level of violence in something like SAVING PRIVATE RYAN. Still, the scenes of horrible beatings to the face and open wounds will disturb all but the most desensitized.

Another very obnoxious thing within the movie is one character who keeps spouting profanities. If the actor came up with this dialogue, the director should have chastised him or fired him. If this dialogue is in the script, it undermines the morality and Christian symbolism of the redemptive allegory. On the other hand, the two characters who seem to utter the most profanities are the two characters who don’t believe in, and have no hope or faith in, the ability of the savior-figure, Neo, and the strength of the love that Neo shares with Trinity.

The good news is that, despite its negative qualities, THE MATRIX REVOLUTIONS contains apologetic, archetypal motifs that can help lead people toward Christianity if presented properly. In fact, the resolution of the conflicts in the movie, especially the one between Neo and Agent Smith, presents a visual and verbal representation of the biblical truth in John 1:15, “The Light Shineth in Darkness; and the Darkness Comprehended It Not (John 1:5, KJV).” This Christian concept of the Messianic Savior, for John 1:5 is clearly talking about Jesus Christ when it talks about “The Light,” helps bring REVOLUTIONS to a more powerful conclusion than the second movie suggested. The fact that the movie contains some strong comments in favor of cardinal virtues also helps. THE MATRIX REVOLUTIONS also contains a positive, although confused resolution to the old science fiction conflict between the human and the mechanical and a provocative, ultimately positive depiction of the science fiction theme of the human within the machine.

The bad news is that these strong positive aspects are encrusted with some false theology, lots of strong violence, and purposeless profanity, particularly in the first three-quarters of the movie. Like the first two movies, THE MATRIX REVOLUTIONS too often seems like a cryptic humanist, intellectual treatise on vapid philosophical concepts and non-Christian religious concepts borrowed from Eastern mysticism. Therefore, MOVIEGUIDE® advises extreme caution, a caution for adults and teenagers older than age 17 or 18. For many, the movie will fall into the excessive category.

SUMMARY: THE MATRIX REVOLUTIONS concludes THE MATRIX trilogy with an action-packed, but excessively violent, story of the final battle between machines and humans, with some of the humans hoping for deliverance from a possible messianic figure in the form of Neo, played by Keanu Reeves. The movie’s Christian allegory and strong moral values ultimately overcome blatant false theology, humanism, lots of strong violence, and purposeless profanities.