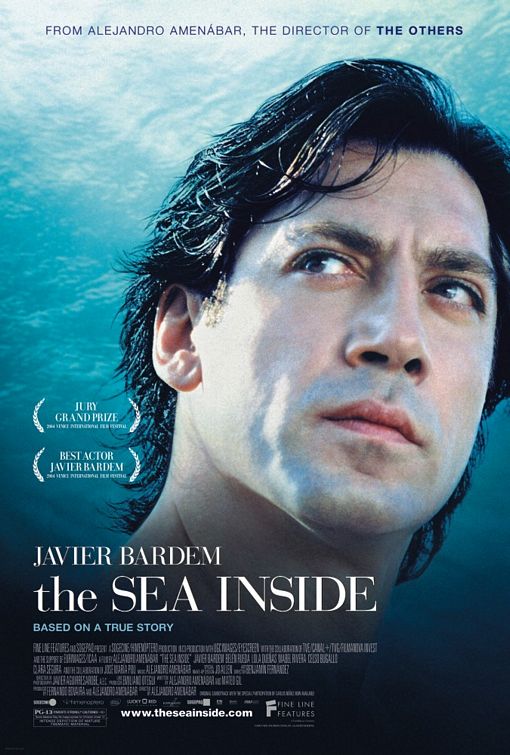 THE SEA INSIDE is a Spanish drama about an articulate paralyzed man who wants to kill himself. He tries to convince two sympathetic women, the courts and his own family to help him commit suicide. Based on a true story, the movie stars Javier Bardem as the paralyzed man.

The filmmakers of THE SEA INSIDE clearly support their protagonist’s views favoring euthanasia. They also lovingly promote their character’s humanist views against the existence of God and the existence of an after-life. Furthermore, they turn a pro-life handicapped priest into a self-righteous busybody. Their pro-death, anti-theist and anti-Christian ideology is matched by their belief in Sampedro’s socialist attempt to convince the courts to impose his will on society. THE SEA INSIDE is an abhorrent movie that echoes the evil socialist, anti-Christian propaganda of Adolf Hitler and his murderous Nazi henchmen in the 1930s and 1940s. One of the most infamous Nazi propaganda movies was pro-euthanasia drama depicting a sympathetic husband defending himself against a murder charge based on the mercy killing of his terminally ill wife. This horrifying movie is depicted in the insightful British documentary, SELLING MURDER: THE KILLING FILMS OF THE THIRD REICH.

(HHH, ACACAC, SoSo, LL, V, SS, N, A, DD, MMM) Very strong humanist worldview, with very strong anti-theist and anti-Christian content, that plays like a Nazi propaganda movie advocating euthanasia, and socialist content where the hero goes to the courts to impose his corrupt will on society; six obscenities (but no “f” words) and one light profanity; man hits head on ocean bottom after diving and paralyzed man takes drug to kill himself; depicted adultery includes kissing and man sticking hand down woman’s shirt to fondle her breast, but no intercourse; upper male nudity and female cleavage; alcohol use; smoking and paralyzed man takes drug to kill himself; very strong miscellaneous immorality includes extra-marital lust and pro-euthanasia propaganda.

In the late 1930s, Adolf Hitler’s National Socialist regime of terror in Germany produced pro-euthanasia propaganda, including books, pamphlets, posters, and movies. As the British documentary SELLING MURDER: THE KILLING FILMS OF THE THIRD REICH (Domino Films) shows, one of the most popular and most effective Nazi propaganda movies was ICH KLAGE AN!, based on MISSION AND CONSCIENCE, a popular novel published in 1936 by a medical doctor, Helmet Unger. The movie shows a sympathetic husband defending himself against a murder charge based on the mercy killing of his terminally ill wife. Like the anti-Semitism which led to the murder of five to six million Jews, Hitler’s pro-euthanasia policies stemmed from his belief in racial eugenics, a pseudo-scientific plan for racial purification.

Many pundits are touting the new Spanish movie, THE SEA INSIDE, for an Oscar, perhaps even a Best Picture Oscar, but especially a Best Actor Oscar for Javier Bardem, the star of the movie. Based on a true story, the movie plays like the famous Nazi propaganda movie cited above. Ironically, this will encourage many leftists, pagans and atheists in the media to celebrate THE SEA INSIDE. Why? Because National Socialism, or fascism, is, in reality, a socialist, pagan and atheist ideology. This evil ideology is exactly what the humanist worldview in THE SEA INSIDE advocates.

Javier Bardem plays Ramón Sampedro in the movie. Sampedro has been paralyzed from a diving accident for more than 25 years. He hires a handicapped lawyer with a terminal disease to represent him in the courts, because Sampedro wants to end his misery by killing himself. The lawyer, Julia, is fascinated with Sampedro, as he is with her, even though she is married. Another woman, a working single mom named Rosa, also falls for Sampedro, an articulate would-be poet who has given up writing because of his accident.

Sampedro expertly makes his case for euthanasia and suicide, even against a paralyzed priest who tries to get him to change his mind. Rosa and Julia have mixed feelings, however. Will Sampedro’s pleas for death convince one of them to help him kill himself?

While Javier Bardem does indeed give an excellent performance as the older paralyzed man and his younger healthy self, it is a notorious performance of evil that will live in infamy.

The filmmakers of THE SEA INSIDE clearly side in favor of their protagonist, Sampedro. They treat all the pro-life characters as mean, angry, uncaring, and/or somewhat ignorant, including Sampedro’s brother. They also argue in their movie that Sampedro’s suicide would be better for his family, which has to take care of him.

The filmmakers also lovingly promote Sampedro’s humanist views against the existence of God and the existence of an after-life. Furthermore, they turn the pro-life priest into a self-righteous busybody. Their pro-death, anti-theist and anti-Christian ideology is matched by their belief in Sampedro’s socialist attempt to convince the courts to impose his will on society. Their movie is somewhat contradictory, however, because their lyrical depiction of Sampedro’s predicament would seem to favor a pro-life position in normal circumstances. Also, at one point, Sampedro asks people, “Don’t judge me,” but he is often shown judging people, especially those who argue against euthanasia. Such hypocrisy is prevalent in the humanist and atheist worldview.

THE SEA INSIDE is an abhorrent movie that echoes the evil socialist, anti-Christian propaganda of Adolf Hitler and his murderous henchmen.

Writer: Alejandro Amenábar, Mateo Gil BASED ON THE NOVEL/PLAY BY: N/A