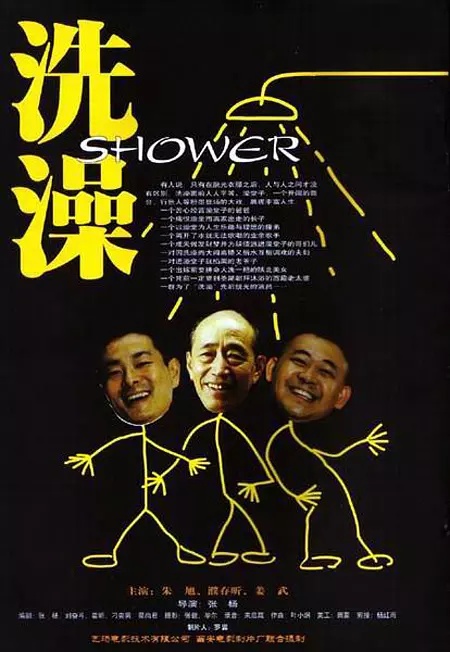 In SHOWER, a comedy from China, a young professional man returns home to his elderly estranged father, who owns a ramshackle bathhouse for men in Beijing. He returns because a picture hand-drawn by his younger, mentally handicapped brother leads him to believe that their father is dying. When he learns the truth, he decides to return home to his wife. Circumstances intervene, however, and he slowly learns the meaning of reconciliation, compassion and responsibility.

SHOWER deftly handles a wealth of emotions by playing things in a restrained, but moving, manner. The movie’s emotional epiphany manages to subtly convey feelings of loss and celebration at the same time. The acting by the principal players is superb, especially Jiang Wu as the mentally handicapped brother. Although there is some rear male nudity and some strong foul language, SHOWER transcends these and other moral and spiritual flaws to convey compassion, responsibility, duty, the importance of family cohesion, and reconciliation. With a bit of cautious discernment, faith-filled viewers may find SHOWER to be a rewarding look not only into another culture but also into some of the moral absolutes that God, in His wisdom, has communicated to all His children

(B, LL, V, S, NN, A, D, M) Mild moral worldview; 9 obscenities, including 1 use of “f” word, & 2 strong profanities plus some name calling; no violence; implied sex between estranged married couple to help husband overcome his impotence; upper male nudity, scenes of partial & full rear male nudity, one scene where naked young boys run around in Chinese bathhouse, one scene of rear female nudity when young woman takes special bath in her family’s home in a rural desert, & married woman’s nude back shown; alcohol use; smoking; and, mild miscellaneous immorality such as married couple bickers but reconciles, one character beats small prayer drum but religion really mentioned or seen, man bullies overweight, shy younger man, man is sore loser during cricket fights, & son does not respect his father’s business & is estranged from his family but eventually reconciles with family.

SHOWER is a comedy drama from China about reconciliation, family duty, compassion, and responsibility. It’s a richly rewarding piece of cinema that, despite some objectionable content, including some strong foul language, manages to transcend its shortcomings.

In the story, a young professional man named Da Ming returns home to his elderly estranged father who owns a ramshackle bathhouse for men in Beijing. Da Ming returns because a picture hand-drawn by his younger, mentally handicapped brother, Er Ming, leads him to believe that his father is dying. When he learns the truth, he decides to return home to his wife. Circumstances and complications intervene, however, as Da Ming slowly begins to learn the meaning of reconciliation, compassion and family responsibility.

SHOWER deftly handles a wealth of emotions by playing things in a restrained, but moving, and often funny, manner. For instance, the movie shows Er Ming standing up to a bully in the bathhouse who doesn’t like the singing of another overweight young man. Er Ming also comes to the rescue when the young man has stage fright while trying to sing at public festival. This subplot eventually leads to the movie’s final emotional epiphany in a scene that manages to convey both feelings of loss and celebration at the same time.

In one sense, Pu Cun Xin, who plays the older brother, has a thankless role because the coldness of his character requires him to play scenes in a very subdued fashion. That said, however, Zhu Xu and Jiang Wu as the father and the brother, respectively, are truly outstanding. They strongly evoke the love and joy between their two characters who have obviously spent many years together running the bathhouse, while the older brother avoided his responsibility, and his family, by pursuing his career and life in another town. The key to watching SHOWER, however, is that viewers are swept into the life of these two characters just as the older brother is. Thus, the older brother becomes somewhat of an emotional surrogate for the audience of the movie. This is a nifty device that adds powerfully to the enjoyment of watching this well-made comedy drama.

The rest of SHOWER’S cast adds to the movie’s atmosphere. They bring character to the bathhouse and its surroundings. In doing so, they help viewers become just as interested in the stories they tell as in the movie’s main plot about the two brothers and their elderly father.

Although set in a Chinese bathhouse, SHOWER does not contain any overtly strong pro-Communist messages. It does have, however, some rear male nudity as the adult men enjoy their baths, massages, pedicures, and teas. There is also a scene where small boys play in one of the shower stalls while completely naked and a scene where the father tells the story of a beautiful young woman living in a rural desert setting who takes a luxurious bath in preparation for her wedding day . In addition, this movie has a few strong obscenities and two strong profanities. Finally, there is some talk about one of the married men having become impotent, and one person beats one of those small prayer drums that Buddhists are known to carry. There is no mention, however, of Buddha or Buddhism, but there is also no mention of God, except in a profane way.

Despite these moral and spiritual flaws, which cannot be totally minimized, SHOWER ultimately transcends them. It is a superbly produced movie that lifts up good values such as compassion, responsibility, duty, family cohesion, and reconciliation. With a bit of cautious discernment, viewers with strong biblical values, particularly those who enjoy foreign movies, may find SHOWER to be a rewarding look not only into another culture but also into the moral absolutes that God, in His wisdom, has communicated to all His children, even those who don’t yet know Him.