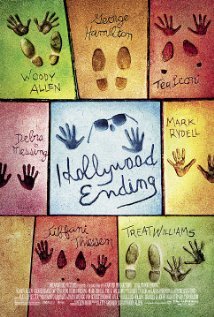 HOLLYWOOD ENDING is extremely funny in places, one of Woody Allen’s most humorous movies in a long time. In the story, Woody plays a neurotic, has-been director named Val Waxman, who’s given one last stab at glory from his ex-wife, who ran off with a slick Hollywood producer. On the eve of the shoot, however, Val goes psychosomatically blind. His agent convinces Val, however, to fake it by relying on the help of the translator for the Chinese cinematographer hired by Val. Comical complications result, but Val’s main desire is to get back with his wife.

Unlike the very subtle and poignant FESTIVAL IN CANNES, Woody is painting a humorous portrait of vile Hollywood filmmaking practices, with broad brushstrokes. The humor comes from the contrast of the vileness in the reality and the moral constants which should be the norm. Sometimes, however, the immorality of the situations and characters overwhelms the moral principles of the movie’s moral worldview. The acting is very good in HOLLYWOOD ENDING, the direction is better than other movies Woody Allen has done lately, and the scriptwriting is sharp, but there is just enough immorality to demand an extreme caution.

(BB, Pa, LLL, V, S, A, DD, M) Moral worldview with lots of immoral people, some of whom are rebuked, some of whom are just humorous characters, but some of whom seem to be affirmed in their immorality; a few positive references to God and many profane utterances including five obscenities, three strong profanities regarding Jesus and 24 mild profanities such as My God or Oh, God; slapstick violence, including one fall off the second story of a set, many bumping into objects by blind director; female star offers herself to director, director discusses masturbation, adulterous relationship and implied fornication, but nothing portrayed except for a few intense kisses; woman in lingerie and low-cut clothing; alcohol; smoking, director takes pills, references to drug use by son; deception, dishonesty, breaking one’s word, gossip, and tons of sarcasm.

HOLLYWOOD ENDING is extremely funny in places, one of Woody Allen’s most humorous movies in a long time. Unlike the very subtle and poignant FESTIVAL IN CANNES, Woody is painting a comical portrait of vile filmmaking practices in Hollywood, with broad brushstrokes. The humor comes from the contrast of the vileness in the reality and the moral constants which should be the norm. Sometimes, however, the immorality of the situations and characters overwhelms the moral principles of the movie’s moral worldview.

The movie opens at Galaxy Studios, where studio head Hal Yaegar, played with great subtlety by Treat Williams, is trying to find the ideal director for a new movie they’re producing, THE CITY THAT NEVER SLEEPS. Hal’s live-in fiance, Ellie, recommends her ex-husband, Val Waxman, a washed up, once upon a time great director, who is known to be difficult and to ruin many a shoot through his psychosomatic problems. Business manager Ed, played by George Hamilton, does not like the idea of Val directing this project.

Cut to Woody as Val in a snow storm in Canada, reminiscent of W.C. Fields’ scene with the snow in the short THE FATAL GLASS OF BEER. This phony snow scene shows Val/Woody Allen at his neurotic best. Val gets fired, comes back to his trailer trash girlfriend, Sharon Bates, and gets a call from his agent that he’s being considered for THE CITY THAT NEVER SLEEPS. Against everybody’s better judgment, Ellie convinces them to hire Val.

On the eve of the shoot, Val goes blind, a blatant metaphor if there ever was one for the condition of some directors in Hollywood. Rather than drop the shoot, Val and his agent, Al, conspire to do the whole shoot and the rest of the movie highlights the ridiculousness of this conceit.

There are some brilliant pieces of dialogue in HOLLYWOOD ENDING, including a very apt homage commending France for recognizing talent that isn’t there. The truth cuts deeply, from the starlet who wants love and recognition so badly that she says that she will do anything the director wants sexually. Woody tells her to take an ad in the Directors Guild Journal and she will never go without a job. Woody even mocks his own sexual narcissism and notes that he likes the cuddling afterwards.

These statements are humorous because they puncture the politically correct lies which are prevalent in our media-obsessed society. However, some of them go over the top. Also, some of Woody’s dissertations would have played better if he had trimmed his language a little bit. He often leaves it up to the audience to see the moral edge, but in doing so, he probably forgot his dictum in the movie that audiences aren’t as smart as they used to be, having been dumbed down by entertainment produced by entertainment industry committees that are probably blind.

At some points in the movie, every other word is a mild curse under the character’s breath. At other points, the movie seems to accept situations that are immoral, including Val’s son Tony, who is in some desperate need for boundaries in his life. His claim to fame as a grunge drummer is biting the heads off rats.

The acting is very good, the direction is better than other Woody Allen films, the scripting is sharp, but there is just enough immorality to demand an extreme caution. For a less offensive insight into the same topic, see FESTIVAL IN CANNES. For a more offensive insight, see THE CAT’S MEOW.