"Journey to the Center of the Solar System" 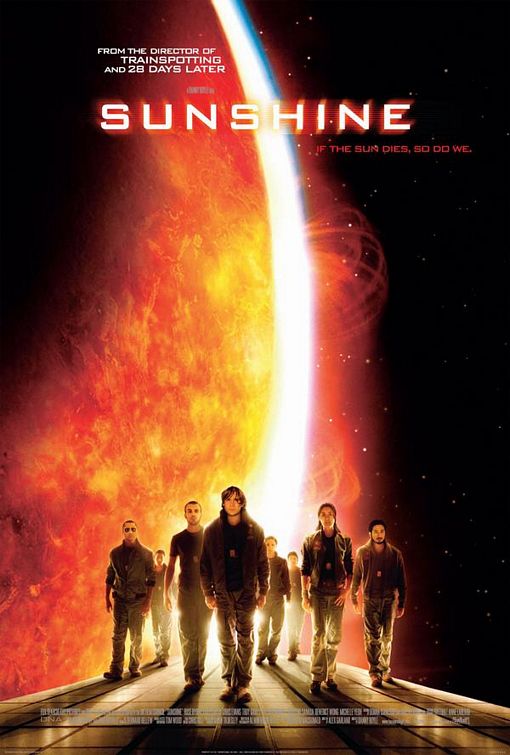 SUNSHINE is a science fiction thriller starring Cillian [“Killian”] Murphy as Capa, an astronaut physicist charged with exploding an extremely powerful nuclear device to re-ignite the sun. The sun has started to lose its power, throwing Earth into a perpetual winter. Earth lost track of one spaceship seven years ago, so the crew of Icarus II is humanity’s last hope. As Icarus II nears the sun, the crew discovers a distress signal from Icarus I, the previous spaceship. Even if that crew is dead, this may let the new crew have two bombs to re-ignite the sun if the first bomb fails. Captain Kaneda lets Capa make the decision, because he knows more about the physics behind the bombs. Capa decides they should go for it, but things start to go wrong, setting the crew’s nerves, and the viewer’s, on edge.

The special effects and editing in SUNSHINE are superb. The story is tense and exciting, though the revelation of what happened to the crew on the first spaceship is uninspired. Regrettably, the movie’s humanist worldview overwhelms its moral, uplifting aspects and includes strong foul language and some brief extreme violence.

(HH, Ab, B, C, LLL, VVV, M) Strong humanist worldview where one character is a madman who has a warped, idiosyncratic view of God, mitigated by some light, ultimately weaker moral, redemptive themes of sacrifice for others and two possible appeals to God in times of crisis; 27 obscenities (including many “f” words), six or seven strong profanities and six light exclamatory profanities; brief scenes of bloody, somewhat gruesome violence and some strong action violence including bloody corpse of suicide victim with wounds, two people freeze to death, fire in compartment destroys plants, stabbings, body consumed by heat from sun, images of corpses turned to ash, deliberate murder, and horribly scarred character; no sex scenes but unmarried (according to the credits) male and female astronaut appear to sleep in same compartment but movie does not show any sexual relationship; brief and partial upper male nudity; no alcohol; no smoking; and, sabotage and crew members discuss murdering a suicidal crew member and committing suicide for the greater good, in order to finish a mission that’s vital to saving the human race from extinction, but it does not come to that.

SUNSHINE is a visually stunning, suspenseful science fiction thriller, but it takes a humanist approach to its subject that undercuts the moral, heroic aspects of its story.

The movie stars Cillian [“Killian”] Murphy as Capa, an astronaut physicist charged with the mission of exploding a large, extremely powerful nuclear device into the sun to re-ignite it. The sun has started unexpectedly to lose its power, throwing the Earth into a perpetual winter. Earth already lost one spaceship seven years ago, so the crew of Icarus II is humanity’s last hope.

As Icarus II nears the sun, the crew discovers a distress signal from Icarus I, the other spaceship. Even if the crew there are dead, this may give the new crew a chance to have two chances to re-ignite the sun if the first chance fails. Captain Kaneda lets Capa make the decision, because he knows more about the physics behind the bombs. Capa decides they should go for it, but things start to go wrong, setting the crew’s nerves, and the viewer’s, on edge.

The special effects, set design and editing in SUNSHINE are superb. The story is tense and exciting, though the revelation of what happened to the crew on the first spaceship is somewhat uninspired.

The movie’s humanist theme is that the tremendous power of nature, as represented by the blazing sun, can either inspire men or drive them mad. This theme of people driven to madness and rage is similar to what happens in Director Danny Boyle’s two other famous movies, 28 DAYS LATER and 28 WEEKS LATER. The movie’s moral theme concerns ethical questions such as, should people willingly sacrifice their lives for the greater good of all or can people be forced to sacrifice their lives.

You would think that at least one of the characters might note that God might have something to say about all these things, but that is not the case. Instead, the one character who is most driven mad by the awesome power of the sun comes to believe that God has decided that the human race should be destroyed. So, he takes it upon himself to stop the other astronauts from completing their mission. This madman clearly has a warped, idiosyncratic view of God, however. For example, when the movie’s hero confronts him during a tense situation and blurts out, “My God,” the madman tells him, “Not your god. Mine.” Being so close to the sun that gives life to Earth has become a religious, awe-inspiring experience for this character and some of the other characters in the movie, but the movie does not present their experiences as a traditional, God-centered one.

Thus, the movie’s humanist theme overwhelms it moral theme, creating a humanist worldview that is more akin to scientific naturalism. Consequently, although there is tremendous, powerful sacrifice for others in SUNSHINE, this sacrifice is seen in the context of atheist (though perhaps not anti-theist) humanism, instead of Christian or biblical theism. This is a shame because the rest of the movie is so well done, including the movie’s last few shots, which end on a hopeful, poignant and sacrificial, but bittersweet, note.