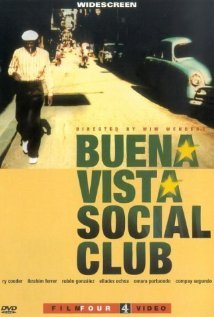 BUENA VISTA SOCIAL CLUB is an entertaining documentary about the group of aged Cuban musicians and singers who helped American popular musician Ry Cooder create the million-selling album by the same name. Although it's not directed as well as it should be and despite positive references to Cuba's socialist tyranny and idol worship, the movie contains a strong pro-capitalist subtext.

Romantic worldview with a strong pro-capitalist subtext & a couple positive references to Fidel Castro's commie-fascist regime, plus some moral elements & references to God, some pagan elements, & scenes of false religion & superstition where one man seems to worship "lucky" statue & image on cane which he calls "Lazarus"; two mild obscenities plus a couple mild, but objectionable sexual references; no violence; brief discussion & lyrics about sexual passion & fornication, but mild; upper male nudity in natural context; alcohol use & inebriation; smoking; and, too much focus in the movie on superficial love songs whose lyrics generally don't have the depth that the filmmakers think they do.

BUENA VISTA SOCIAL CLUB is an interesting documentary about the group of aged Cuban musicians and singers who helped American popular musician Ry Cooder create the million-selling album by the same name. The title refers to a popular nightclub in Havana, Cuba during the 1940s and 1950s, where most if not all of these talented Cuban musicians played. The movie interviews the artists and shows them recording in Havana and performing in Amsterdam and New York City’s Carnegie Hall.

The famous German director Wim Wenders [Vim Venders] (WINGS OF DESIRE), who used Cooder’s music on a couple of his most recent fiction films, directed BUENA VISTA SOCIAL CLUB. The sound in this movie is quite wonderful, but the color in the scenes set in Havana is poorly done, adding to the squalor evident there (which is due, of course, to the socialist tyranny that Fidel Castro and his Bolshevik friends have created there). Also, while the interviews and most of the songs are usually fascinating and quite entertaining, Wenders has a bad habit of cutting away from too many of the songs instead of letting the audience hear the whole thing. Both the color and the bad editing dilute the pleasure of watching the movie, which otherwise may have deserved four stars.

During the movie, Ry Cooder touts the singing talent of Ibrahim Ferrer. Ferrer does indeed have an excellent voice, but the one vocal by Eliades Ochoa seemed even better than all of Ferrer’s. The movie shows Ochoa, age 53, singing an old song celebrating life in the Cuban countryside. The song compares the countryside to the Garden of Eden. Its lyrics also describe what a joy it is to enjoy the fruits of your hard work. These are strong biblical themes, and perhaps that explains why this movie fails to focus on Ochoa for any length of time.

In that light, it is interesting to note that the movie shows 72-year-old Ferrer almost worshipping a “lucky” statue in his house and an image of the statue on his cane, both of which he calls “Lazarus.” Although Ferrer fails to describe fully what all this means to him theologically, it seems to be a case of idol worship, a false religion. The statue and cane image could be a subtle reference to the Lazarus whom Jesus Christ raised from the dead, which would better explain Ferrer’s several references to God in other parts of BUENA VISTA SOCIAL CLUB.

The most amazing artist of all, however, is 80-year-old pianist Ruben Gonzalez. In the production notes to the movie, Cooder calls him “the greatest piano soloist I have ever heard in my life.” Ruben’s playing in BUENA VISTA SOCIAL CLUB offers much proof for Cooder’s praise. It was an absolute joy to watch this man’s fingers dance across the ivories; the music those fingers created was wonderful. One of the best scenes in the whole movie is a scene where Gonzalez plays in an old building turned into a gym while little girl gymnasts delightfully watch this old gentleman play a couple songs.

Thus, BUENA VISTA SOCIAL CLUB is a fascinating, often mesmerizing audio experience that celebrates the lives and music of some of Cuba’s greatest popular musical artists. The biggest problem with nearly all of the Cuban songs, however, is that they are superficial love songs whose lyrics generally don’t have the depth that the filmmakers think they do. Also, although it is great to hear the artists talk about their music and their lives, too many of the interview sequences tend to be mostly simple biographies. Ultimately, the movie seems to have a romantic worldview about the essential goodness in most, if not all, human beings.

One final subject regarding BUENA VISTA SOCIAL CLUB should be discussed. Despite a couple positive references to Castro’s socialist regime in Cuba, the movie contains a strong pro-capitalist subtext when a couple musicians remark how great New York City is with its tall skyscrapers and fine culture. One scene has them admiring the Statue of Liberty from the top of the Empire State Building. Intelligent members of the audience will realize what a difference the gleaming streets of New York make when compared to the social squalor and decrepit environment evident in the scenes set in Havana. Indeed, it is capitalism that funded the renewed interest in the music of these wonderful artists. It’s enough to make one cry out fervently, “God bless America!”