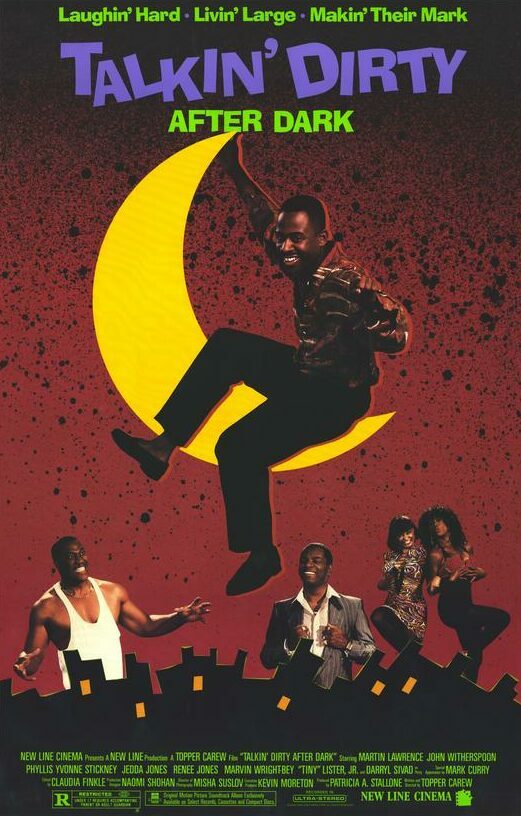 The title, TALKIN DIRTY AFTER DARK, says it all for this sleazy movie about a group of black comedians working a small-time comedy club in Los Angeles. Foul language, sexual situations and stale jokes make this movie thoroughly unwatchable.

The title, TALKIN DIRTY AFTER DARK, says it all for this high-concept, low-morals movie about a group of black comics working a stand-up comedy club in south-central L.A.

“Dukie’s,” a trendy, all-black comedy club/restaurant, is both the setting and central character here, since the movie is too much of an ensemble picture to make any other explanation possible. In the tradition of CAR WASH, we are presented with a number of characters and their more or less interweaving plot lines.

Terry is the youngest of the comics and one not yet very sure of himself. It’s a small wonder: not only is Terry in debt financially to the club’s tough-guy owner (Dukie Sinclair), but he’s also messing around between sets with Ruby-Lynn, Dukie’s battle-axe wife. Not particularly attracted to her, Terry nevertheless allows himself to be seduced in hopes of increasing his time on stage at the club.

Dukie, however, is too busy to notice, running interference as he is between Ruby-Lynn, and Aretha, the club’s star performer, who has been getting too uppity for Ruby-Lynn’s liking. The two women bicker and squabble, each threatening to leave, causing Dukie no end of grief.

Another plot involves the club’s hunk M.C., pursued all night by two obnoxious bimbos, much to the anger of his prim and proper girlfriend. Yet another story follows the path of destruction cut by Aretha’s 300 pound body-builder boyfriend, Big, who likes to break things–and people when they get too close to his girl. Finally, there’s Percy, the eccentric comedian from out of town who spends the whole night trying to find Dukie’s from a bus stop across town. Spaced between these stories, of course, are the various stage performances of each of the main characters.

Unfortunately, the potential for fun is lost when no none of the situations mentioned comes to any real resolution or comedic pay-off by film’s end. A problem greater than that, however, is the fact that none of the performances, either on stage or off, are in the least bit funny. No one even tries to be funny, for that matter, opting instead for the scatological “shock comedy” to which no talent comedians far too often resort these days (Remember Andrew Dice Clay?). And, shocking it is: foul language, sexual innuendo and sleaze is here in abundance, making this movie one to avoid.

Interestingly enough, one of the comics, during his stand-up routine, asks why it is that the African-American community has such a negative image in the media these days. Good question. Perhaps he should be asking himself why he’s contributing to that image by appearing in a movie such as this.