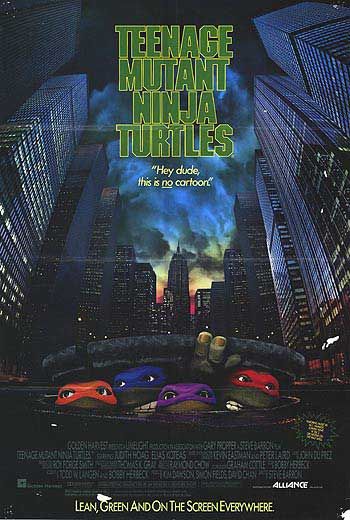 In New York City, an army of Ninja warriors terrorize hapless citizens with rampant thefts and violence. Their leader, Shredder, an evil Ninja karate master from Japan, recruits into “the family” teenage boys, who feel their parents don’t want them, by instilling in them a sense of worth. Using their loyalty, Shredder trains them to steal.

Opposing Shredder are the teenage mutant ninja turtles: Donatello, Raphael, Michelangelo, and Leonardo. They are guided by Splinter, a father figure and rat of Japanese descent, himself a master in the art of ninjitsu. All the animals were once normal, but when they walked through some radioactive waste in the sewers, they became enlarged and acquired human qualities.

Splinter is captured by the evil Shredder, and it’s the turtles to the rescue! Joining their cause is Casey Jones, a tough street fighter who is at odds with April, a TV reporter seeking information on Shredder’s clan. In the final battle, Splinter disposes of Shredder by dropping him from a rooftop into a garbage truck, where he is crushed by its trash compactor.

Along with their incredible fighting skills, the turtles’ source of power includes New Age techniques of telepathy and visualization (they conjure up Splinter in a visionary encounter where he appears to them in the fire). Furthermore, Splinter teaches the turtles (and really the viewer since when he speaks it’s face-to face with the camera) that by using the powers of their minds, they can do anything, even become invisible.

Children, however, will not readily discern the New Age-ism so subtly presented, probably because they will instead identify strongly with the turtles and enjoy their jokes and jargon (the “Hey Dude!” and “Totally awesome!” verbiage is comically used). Amidst the constant barrage of violence (which, admittedly, is handled in a satirical, humorous way), children will understand the film’s underlying theme that the only way to solve conflict is by beating someone to a pulp. Not only is this an inappropriate way to resolve conflict, but children will also have a hard time distinguishing between good and evil. The turtles, or “good” heroes, use that which is evil to overcome evil (a non-biblical premise) and are also quite flippant about the seriousness of the situations in which they find themselves.

Finally, to put “Damns” and “what the hells” into a movie clearly targeted for children is disturbing to say the least. Therefore, even though Jim Henson’s transformation of the cartoon reptilian favorites into walking real-life creatures is a well-produced movie that could have been a lot fun for children, MOVIEGUIDE cannot recommend it.

Audience: Teenagers and children [But: we recommended no younger than older teenagers]