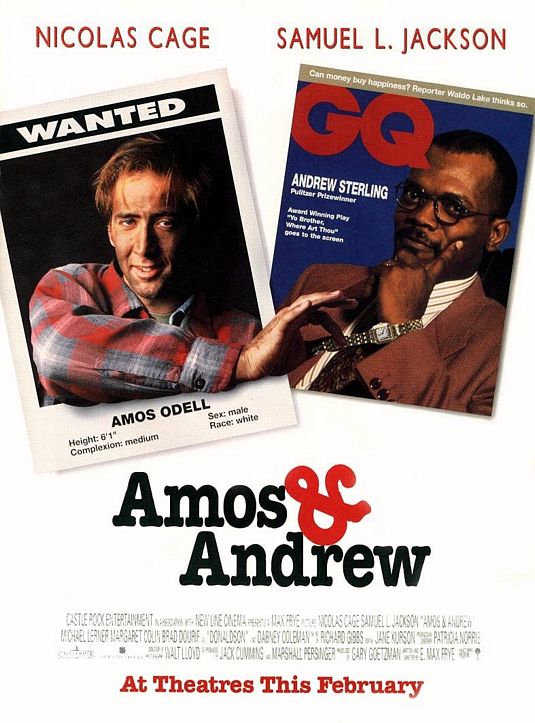 The movie AMOS AND ANDREW deals with a well-known black author, Andrew, who moves to an exclusive white community and is mistakenly taken for a burglar. On the other hand, Amos is a white criminal hired to pose as a gunman and get the local police authorities off the hook for their blunder. The reversal of roles (and parody of the television series AMOS N' ANDY) turns out to be an enjoyable comedy which successfully debunks some longstanding stereotypes.

In the light-hearted comedy AMOS AND ANDREW, Andrew Sterling (Samuel Jackson) is a well-known black author, scholar and celebrity who moves into a white community. He sets up a stereo in his new home and is mistaken for a burglar by the Chief of Police, Cecil Tollivan, who dispatches an entire police unit to Andrew’s house. During the seige, Andrew is plagued with flying bullets and stays barricaded. Since Andrew’s picture currently graces the cover of Forbes magazine, the police soon discover their mistake and hire a white criminal, Amos, to pose as a gunman holding ANDREW hostage to get them off the hook. Andrew and Amos become friends and realize they have similar backgrounds, and the mix-up is resolved at the end of the film.

The movie successfully takes a major social issue and humorously makes light of it without bringing offense to either race. Samuel Jackson is anything but a stereotype in his portrayal of Andrew Sterling. He lends the character an air of sophistication and twentieth-century worldliness. Nicholas Cage compliments the Jackson’s role with his earthy portrayal of Amos O’Dell. The two characters are so well rounded that their opposite natures compliment each other, creating a love/hate relationship. The reversal of roles (and parody of the television series AMOS N’ ANDY) turns out to be an enjoyable comedy which successfully debunks some longstanding stereotypes.