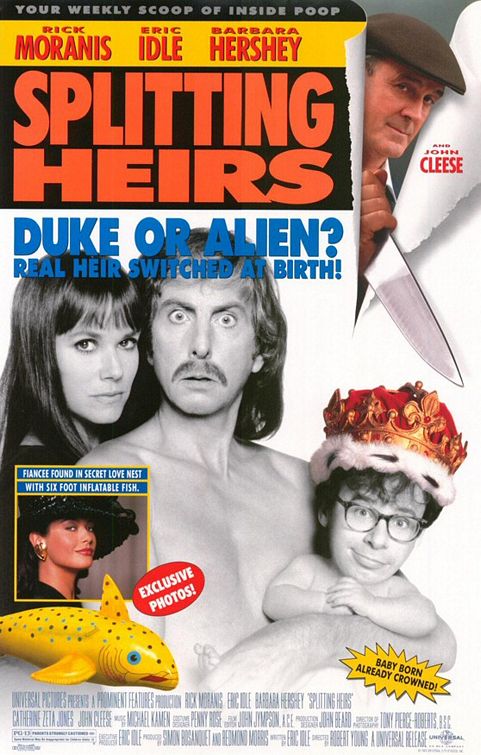 SPLITTING HEIRS, a story of mistaken baby identity, is a comedy with promise which falls flat and fails to deliver. Left behind at a London party by his aristocratic parents, baby Tommy is adopted by a poor Pakistani family. When Tommy realizes his true identity as the next Duke of Bournemouth, he tries to kill the imposter. Regrettably, nothing can make up for the film's poorly written script, and the humor is mostly sick and sophomoric.

SPLITTING HEIRS, a story of mistaken baby identity, is a comedy with great promise which falls completely flat and fails to deliver. Left behind at a London party by his aristocratic/hippie parents, baby Tommy (Eric Idle) is adopted by a poor Pakistani family for the extra child-support money and grows up to work for the family he should rightfully lead. The unrightful heir Henry (Rick Moranis) actually belongs to the nanny, but is accepted as the missing Bournemouth baby to avoid further scandal. When Tommy realizes his true identity as the next Duke of Bournemouth, he takes matters into his own hands to try to recover his birthright. Tommy’s attempts on Henry’s life all fail, even with the uninvited help of his lawyer Shadgrind, who is responsible for the idea to provide an “accident” for Henry. Somewhere along the way a child is fathered, a nanny is blown to bits, an estate is burned to the ground, and a cook is frozen in the meat locker. The truth finally comes out via the baby intercom and everyone somehow lives happily ever after, no hard feelings.

John Cleese turns in the only humorous performance as Shadgrind, while the rest of the cast are forgettable. The filming and overall production are passable, but nothing can make up for the poorly written script. The humor is mostly sick and sophomoric. The idea has comic promise, but the final product misses badly.