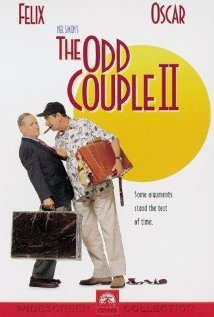 THE ODD COUPLE’s original pairing for the big screen, Walter Matthau as the messy Oscar and Jack Lemmon as the neat-nick Felix, join up again 30 years and 9 films later to perform their beloved routine of bickering mixed with brotherly love. NEIL SIMON’S THE ODD COUPLE II places the men on a road trip to northern California where their children are getting married to one another. This movie is simple, sweet and silly, but it does have charm. A no-brainer, it is flawed by some foul language and sexual innuendo.

By now, the routine has become classic and the pairing inspired. THE ODD COUPLE as originally penned by Neil Simon and performed on stage, in the movies and on television, has become an American institution. Its original pair for the big screen, Walter Matthau as the messy Oscar and Jack Lemmon as the neat-nick Felix, join up again 30 years and 9 films later to once again perform their beloved routine of bickering mixed with brotherly love.

NEIL SIMON’S THE ODD COUPLE II is simple, sweet, silly, and a no-brainer, but it does have charm and reminds us that these two old timers still got it.

Oscar’s son Brucey (Jonathan Silverman) calls him up in Sarasota and tells him he is getting married. Overjoyed, Oscar asks who is the bride.

Oscar nearly becomes undone but endures a flight to California. Meanwhile, Felix flies to California and sneezes and wheezes all the way there, suffering from allergies. At LAX, the two roommates spot each other, run towards each other, and Felix trips and falls right on top of Oscar. So, begins the series of pratfalls and slapstick comedy which earmark the charming, but formulaic picture.

What follows is a series of mishaps straight out of TRAINS, PLANES AND AUTOMOBILES. Felix loses his luggage; Oscar loses the directions; their car rolls down hill; and, they are kidnapped by a pair of trashy thugs who think that they are hitting on their trashy wives, Thelma (Christine Baranski) and Holly (Jean Smart). Throughout it all, they are giving the local sheriff a fit. Finally, they take a plane up north to Santa Malina. On the plane, Felix meets a middle age woman named Felice, whom he thinks is the one for him, even after two marriages and divorces. Although the wedding goes forward, Felix and Oscar encounter more bumbles and difficulties, and the possibility looms once again for the two to become roommates.

This is exactly what you would expect from a Matthau/Lemmon comedy. Lots of one liners and plenty of sight gags. The two are very good at what they do, but what they do is very limited and not for everyone, even senior citizens.

Frankly, many folks may be put off by the foul language in this film. Though the obscenities are mild and the profanities are mainly exclamatory, the words may ring offensive to those who remember the movies without cursing.

Furthermore, there is some mild sexual innuendo which seems a little ridiculous at times. Yet, NEIL SIMON’S THE ODD COUPLE II does have plenty of warmth, smiles, endorsement of marriage (despite the fact that both characters are divorced), and a sense of loving others and sticking up for others even when you would rather punch them in the face. The ODD COUPLE story may be so endearing and enduring because it asks us to love our brother (or roommate) despite their flaws and differences. This is a good lesson for anyone, and Matthau and Lemmon have worked many, many years perfecting this message through drama.