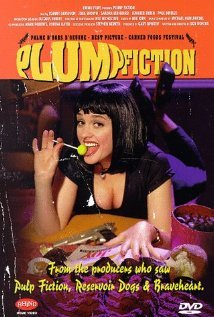 PLUMP FICTION is a lame spoof of five noteworthy films made in the last six years: PULP FICTION, RESERVOIR DOGS, NATURAL BORN KILLERS, FORREST GUMP, and NELL. PLUMP FICTION has the crudities and foul language that accompanies almost every spoof like this since BLAZING SADDLE and AIRPLANE. In that respect, PLUMP FICTION reaches the bottom of the barrel.

PLUMP FICTION is a lame, mostly unfunny spoof of five noteworthy and/or popular movies that have been made in the last six years. Although it has some clever twists on the plots and characters of these movies, it also contains the excessive foul language, sex, violence, and immorality of three of the movies, all of which, like PLUMP FICTION, are rated R.

The strip teasers meet up with one of the pesticide men and the owner’s wife, who accidentally shoot the women, leading to a crazy takeoff of Tarantino’s paranoid bank robbers in RESERVOIR DOGS. Into this mix PLUMP FICTION throws a takeoff of writer/director Oliver Stone’s pair of psycho murderers in NATURAL BORN KILLERS. PLUMP FICTION’s killers end up in a spoof of the famous restaurant scenes at the beginning and end of PULP FICTION. They meet up with the other pesticide man, a spoof of Samuel L. Jackson’s hilarious, repentant black hitman. On the milder side, PLUMP FICTION also includes spoofs of the title characters in FORREST GUMP and NELL, starring Tom Hanks and Jodie Foster, respectively.

Viewers don’t necessarily have to have seen FORREST GUMP and NELL to enjoy the spoofs of these two movies, but knowledge of the plot circumstances and specific character traits in the other three movies are necessary to thoroughly enjoy the plot circumstances and characters in PLUMP FICTION. This is true, however, only if you can get past the lack of humor in the script, not to mention the foul language, sex, violence, and gore.

Some of the character and plot twists in this spoof are clever, but writer/director Bob Koherr and his players, especially Julie Brown, Sandra Bernhard, Jennifer Rubin, and Paul Dinello, have forgotten that the situations, characters and lines in a spoof must be funny in their own right in order to make such a film successful. Part of the problem may be that the movie’s humor focuses too much on details about specific films rather than general and particular points about kinds of films. Also, much of the dialogue seems to be just a repetition of the dialogue in the other movies.

Even so, fixing those problems won’t put a dent in the final problem PLUMP FICTION has: the crudities and foul language that accompany almost every spoof like this since BLAZING SADDLE and AIRPLANE. In that respect, PLUMP FICTION reaches the bottom of the barrel.