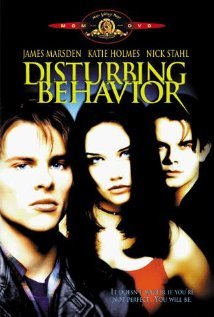 In his directorial debut, David Nutter goes to the ridiculous extreme in DISTURBING BEHAVIOR. Nathan and Cynthia Clark move from Chicago to seemingly peaceful Cradle Bay with their two children, Steve and Lindsay. Steve, reticent to socialize with the "in group," becomes drawn to Gavin and Rachel who are both loners. At first glance, the "Blue Ribbon" exemplary students appear to be perfect darlings. Upon closer examination, one begins to realize that there is something quite bizarre and sinister about their behavior. They are programmed by a school psychiatrist to be perfect students. When Gavin emerges as a transformed "Blue Ribbon" member, Steve and Rachel try to escape the system.

To communicate that conformity is undesirable, the director conveys that teenagers should remain who they are no matter how rebellious, destructive and promiscuous. The concept of growth is non-existent as is the need for discipline, responsibility and respect for authority. Not having a compelling script as a foundation, the acting performances are mediocre. Additionally, the action sequences are unrealistic as is the scientific procedure that is used to alter the teenagers' brains. This movie equates being responsible, having morals and caring for others with disturbing behavior

In his feature film directorial debut, David Nutter’s DISTURBING BEHAVIOR goes to the ridiculous extreme in an attempt to deliver his message of mind control and chaos.

Originally from Chicago, Nathan and Cynthia Clark move to seemingly peaceful Cradle Bay with their two children, Steve (James Marsden) and Lindsay (Katherine Isabelle), as a way of putting behind them the tragedy of their son Allen’s suicide. Steve, reticent to socialize with the “in group,” becomes drawn to Gavin (Nick Stahl) and Rachel (Katie Holmes) who are both loners among the high school crowd. The students in this school are broken down into the rebellious drug users and the clean cut “Blue Ribbons” who are disciplined academics, leading clean lifestyles and being involved in community affairs. Wearing uniforms that distinguish them from the rest of the students, they alienate all those who are not in their circle. At first glance, they appear to be almost perfect darlings. However, upon closer examination, one begins to realize that there is something quite bizarre and sinister about their behavior.

The school psychiatrist, Dr. Caldicotte (Bruce Greenwood), believing that science is god, convinces the parents of Cradle Bay that a “Stepford-like” surgical procedure is the needed remedy to their teenagers’ rebellious behavior. He has devised a behavior modification program using brainwashing techniques and microprocessors implanted in the teenagers’ brains. Believing that “the end justifies the means,” Dr. Caldicotte doesn’t care about the dangerous side effects of this procedure. Any time the children suppress any forbidden or unforeseen desires, they have psychotic outbursts which cause them to become violent and capable of murder.

Gavin notices the differences in his former friends after they have gone through this “enlightenment process” and tries to convince Steve and Rachel of this horrifying occurrence. They, however, have a difficult time believing Gavin until his parents sign him up for the “enlightenment process.” When Gavin emerges as a completely transformed “Blue Ribbon” member, Steve and Rachel realize Gavin was right on target with his suspicions. Fearing he may be next, Steve wants out of Cradle Bay before it is too late. Following is a series of unbelievable events that take place in order for Steve and Rachel to escape the system.

In an effort by Nutter to communicate the message that conformity is perilous and undesirable, he goes to the extreme by conveying that teenagers should remain who they are no matter how rebellious, destructive and promiscuous they wish to be. In this story, one is either a radical rebel or an ultra-conservative saint, with no shades of gray. Hence, the characterizations are weak. The concept of self-improvement and growth is non-existent as is the need for discipline, responsibility and respect for authority. In strongly emphasizing this one point, the movie gives a distorted message about conducting oneself in school and in the community.

Not having a compelling script as a foundation, the acting performances are merely mediocre. James Marsden has starred in several TV series including BELLA MAFIA and THE NANNY. Katie Holmes is best known for her role in the TV teenage drama, DAWSON’S CREEK. Nick Stahl made his feature debut as the child lead opposite Mel Gibson in THE MAN WITHOUT A FACE. Additionally, the action sequences are completely unrealistic and unbelievable as is the scientific procedure used to alter the teenagers’ brains.

What is most disappointing about DISTURBING BEHAVIOR is that its major target seems to be the teenage audience. In a time when teenagers are facing enough difficult and sometimes terrifying experiences in their lives, the need for an uplifting, motivating and positive film is highly needed. Instead, this movie adds to the unsettling climate of our times and, in the end, equates being responsible, having morals and caring for others with bizarre and disturbing behavior.