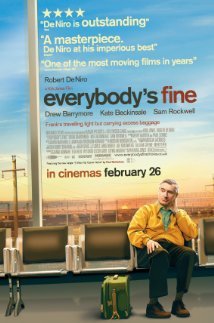 EVERYBODY’S FINE, a remake of an Italian movie, is a heartfelt, yet depressing and run-of-the-mill, drama. Robert De Niro plays a widowed father, Frank, who sets out on a surprise road trip across the country to reconnect with his grown-up children. Frank discovers their lives are not as happy as they appear. As he visits his children one by one, he struggles to understand the lies and unanswered questions concerning their lives. Then, a depressing truth is finally revealed. This forces the family to draw closer together in love and support.

EVERYBODY’S FINE, though acted well and delivering on an emotional level, is somewhat stinted in plot and dialogue. There are few surprises as the straightforward plot unfolds predictably. The movie contains some redemptive moments, however, especially Frank’s attempt to reunite with his children because he truly loves them. Frank comes to see himself through his children as too overbearing but realizes he can no longer control what happens in their lives. EVERYBODY’S FINE ultimately is depressing as the characters struggle without turning to God. MOVIEGUIDE® advises caution for this humanist motif, some foul language, lying, and a possible lesbian character.

(Pa, BB, HH, Ho, LL, V, S, N, A, DD, M) Light mixed pagan worldview with strong moral elements where protagonist tries to reconnect with his family and family members show love and support to one another, but combined with strong humanist elements where characters solve their problems by their own strength and look for hope within themselves, and one character thinks she might be a lesbian, and it is implied at the end she has chosen to be; eight obscenities and nine profanities; brief violence where man is attacked by homeless person wanting more money; brief sexual content includes prostitute propositions man but he treats it with humor and turns her down; nudity includes a naked male statue where water is coming out of its private parts and some minor female cleavage; alcohol use includes man buying a few bottles of wine and characters drink wine with dinner; smoking depicted by one character and another character ODs on drugs but this is never actually depicted; and, character has baby outside of marriage, children lie to father but this is resolved in the end, man comes to terms with the overbearing manner in which he raised his children and ends up mending his strained relationship with them, and each character seems to be struggling through life without ever turning to God.

EVERYBODY’S FINE, a remake of the Italian movie STANNO TUTTI BENE, is a heartfelt, yet depressing and run-of-the-mill drama about a widowed father who sets out on a surprise road trip across the country to reconnect with his grown-up children and discovers their lives are not as happy as they seem to be.

Frank (played by Robert De Niro), preparing for a family reunion at his home, realizes that the only connection he had to his children was through his recently deceased wife. When each family member consecutively cancels their plans to visit, Frank decides, in spite of his poor health, to visit them instead.

Sticking to trains and buses, Frank’s travels take him first to New York where his youngest son, David, a painter, resides. Frank waits for his son to show up throughout the night. Unable to get hold of his son, he decides to continue his traveling to the home of his oldest daughter, Amy (played by Kate Beckinsale), a successful ad agency owner with a seemingly troubled marriage, though the details of this she hides from her father.

Still unable to reach David and having enjoyed the time with his daughter though unable to gain any answers from her, Frank sets off to visit his oldest son, Robert (played by Sam Rockwell), who he believes to be an orchestra conductor. He is surprised to discover that Robert is actually only a percussionist, having slacked in his musical talents. Their relationship becomes more strained as Robert feels he is not meeting his father’s expectations. Frank has to convince his son he is still proud of him but doesn’t understand why he is not living up to his full potential.

Frank’s final stop takes him to his daughter Rosie (played by Drew Barrymore), a Las Vegas dancer. Like her siblings, Rosie also doesn’t have her life as together as Frank had thought. She also hides the truth from him concerning the realities of her life.

Unknown to Frank, his children have been communicating with each other over a situation concerning David, each feeling that it’s best not to tell their father until it is straightened out. Their visits with Frank are strained because each is trying to hide the truth of David’s whereabouts.

As Frank tries to understand the lies and unanswered questions concerning his children’s lives, the depressing truth is finally revealed. This forces the family to draw closer together in love and support.

EVERYBODY’S FINE, though acted well and delivering on an emotional level, is somewhat stinted in plot and dialogue. The plot is very straightforward, and there are little surprises as the story unfolds according to the viewer’s expectations. Although Robert De Niro does an excellent job branching out from his usual character portrayals, his dialogue and the dialogue given to the other actors leaves them with little to work with. Overall, the impression is given that the filmmakers are trying too hard to create an artful and emotional masterpiece, and they end up overshooting their goals.

However, there are some redemptive moments in the movie, including Frank’s attempt to reunite with his children because he truly does love them. Also, he comes to see himself through the eyes of his children as an overbearing father and realizes he can no longer control what happens in their lives. From his perspective, he loved his children by working hard and by pushing them to grab hold of the opportunities he never had at their age, but he discovers that love is sometimes letting your children make their own mistakes.

Aside from the redemptive material, EVERYBODY’S FINE is ultimately depressing and hopeless as the characters struggle through their life experiences without ever turning to God for love and forgiveness. The implication is that the love of family is enough to help make it through difficult times. Family is indeed important, but without God it is utterly empty. MOVIEGUIDE® advises caution for the strong humanist elements, foul language, lying, and a possible lesbian character.