"Hero Caught in the Middle" 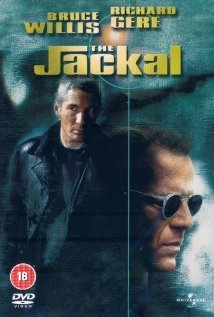 THE JACKAL is a brilliant though R-rated retooling of author Frederick Forsyth’s 25-year-old thriller THE DAY OF THE JACKAL. In THE JACKAL, Richard Gere plays an ex-IRA soldier enlisted by the FBI and a Russian major to track down a cruel assassin, played by Bruce Willis. Gere and Willis give two of the best performances of their usually lackluster careers in this tense and exciting but flawed movie. Sidney Poitier and Diane Venora also shine in the roles they play.

The movie is a marvelous modern retelling of the quintessential American story of the western hero who must defend a family, children and/or a woman from dark savage forces threatening to destroy them. THE JACKAL is tainted by unnecessary, gratuitous violence, foul language, and mild homosexual scene but has an overall moral worldview. This is true especially at the end where the movie upholds marital fidelity, self-sacrifice to protect the lives of others and a biblical punishment for evildoers. The biblical punishment is shown by the fact that two of the villain’s victims carry out his final punishment. The justice they deliver is a justice borne out of self-defense, not out of revenge as in some action films

(B, LL, VVV, N, A, D, I, M, P, Ho) Moral & sometimes biblical worldview spoiled by gratuitous foul language especially in two scenes in the beginning & middle of the movie; 20 obscenities, 3 profanities, 1 vulgarity, & 1 curse; excessive blood & brutality, fight in Russian bar ends in one shooting death, man murdered by ax in head, man tortured briefly by Russian police, man gets arm shot off & then is murdered by machine gun, one murder by poison, four cops slain brutally, another man murdered by two gunshots in chest, at least two people wounded, & miscellaneous gunfire, chasing & punching; no sex scenes except for a scene in a homosexual bar with two mild kisses; natural upper male nudity & two women in revealing bikinis; alcohol use; smoking; miscellaneous immorality such as villain’s cruel behavior including kidnapping, stealing & forgery & no condemnation of previous immorality by hero who was active in the Irish Republican Army but claims he did not bomb or deliberately kill civilians.

THE JACKAL is a brilliant though R-rated retooling of author Frederick Forsyth’s 25-year-old thriller THE DAY OF THE JACKAL. Despite its theme of international terrorism and its modern urban setting, the movie is the quintessential American story of the western hero who must defend a family, children and/or a woman from the dark savage forces threatening to destroy them. THE JACKAL adds some fresh, innovative angles to that classic tale, a story pattern that goes back at least as far as the novels of James Fenimore Cooper, author of THE LAST OF THE MOHICANS.

The movie opens in Moscow where members of the Russian Mafia start a fight to the death with Carter Preston, the FBI’s Deputy Director (Sidney Poitier), and Russian Major Valentina Koslova (Diane Venora). The major saves Preston’s life by killing the leader of the gang, but the slain leader’s brother hires a mysterious assassin known only as The Jackal (Bruce Willis) to murder a top American official, preferably in a public place with lots of witnesses.

To stop The Jackal from completing his $70 million mission, Preston and Koslova enlist the aid of Declan Mulqueen (Richard Gere), an ex-IRA terrorist who wants a “fresh start” in life. Mulqueen once met the assassin, but The Jackal betrayed Mulqueen and his IRA lover, Isabella (Mathilda May), during an arms deal.

Working closely with Preston and Koslova, Mulqueen follows The Jackal’s trail as the cruel villain plans his wicked crime. The movie alternates between The Jackal working secretly to carry out his evil deed, and the investigative activities of the good guys, who also seek the aid of Mulqueen’s ex-lover, who’s living a quiet life in the United States with her American husband and family.

The movie earns its R-rating from some unnecessary violence, foul language and a scene where The Jackal uses a naïve homosexual to avoid staying in a D.C. hotel. Much of the pleasure of watching the rest of the film, however, is in following the clever movements of the cruel villain and wondering if Mulqueen and the other good guys are good enough to stop him in time. In the earlier versions of this story, the assassin was opposed by a top French detective. The filmmakers of the new movie have improved on that by adding the Russian major’s compelling character and creating the plot involving Mulqueen, Isabella and The Jackal. Their effort increases the tension and leads to a more dramatically satisfying conclusion than the 1973 movie version. It also adds more meaning to the whole affair.

Richard Gere as Mulqueen and Bruce Willis as The Jackal give two of the best performances of their usually lackluster careers. Willis is coldly efficient and truly menacing as the villain. Gere is superbly earnest and even tender as an Irish version of the archetypal American hero. Mulqueen is caught between the society he is defending and the world of the villain, a world to which he once belonged. When the villain’s dark world threatens the women in Mulqueen’s life as well as America’s First Lady, the symbolic figurehead of American womanhood, Mulqueen’s situation becomes even more perilous and heroic. Director Michael Caton-Jones depicts this danger incredibly well at one point when he shows his hero caught between two speeding subway trains. It is refreshing to see an action film director create such a wonderful visual symbol that fits so well in the story.

Despite the immoral aspects mentioned above, THE JACKAL has a basically moral worldview. This is true especially at the end where the movie upholds marital fidelity, self-sacrifice to protect the lives of others and a biblical punishment for evildoers. This last example is shown by the fact that two of the villain’s victims carry out his final punishment. The justice they deliver is a justice borne out of self-defense, not out of revenge as in some action films.