"An Epic Voyage With Some Faulty Worldview Notions" 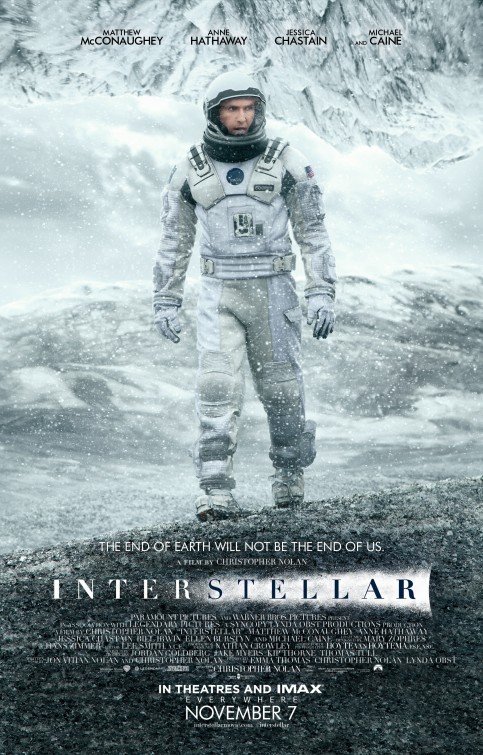 INTERSTELLAR is a science fiction adventure set on a devastated earth in ecological ruin. Cooper, a widower with two children he desperately loves, is asked to pilot a spaceship that will travel through a wormhole into another galaxy. The goal is to find a new habitable planet for humanity. The only problem is, Cooper can’t guarantee his children when or even if he will return. Cooper’s journey into interstellar space to save mankind pushes him and his crew against impossible odds in unimaginable circumstances.

INTERSTELLAR is an immersive, visually stunning cinematic experience provided by a rich story, strong acting performances, and gorgeous visual effects aided by a majestic score. The worldview is mixed, because the filmmakers are asking a lot of questions, but are finding answers in various worldviews, including humanist and biblical ones. Though mainly humanist at the end, the characters are very moral and exhibit selflessness, love, forgiveness, and courage. The action sequences are intense. That, and some foul language and the mixed elements, requires extreme caution, especially for younger viewers. INTERSTELLAR is a very enjoyable conversation starter.

(Pa, HH, BB, CC, Ro, FR, PP, Cap, AC, LL, VV, A, M) Light mixed pagan worldview with strong humanist elements (especially at the end), but with characters exhibiting strong moral, redemptive values of courage, sacrifice, love, forgiveness, and reconciliation along with positive references to prayer and to some Biblical figures, including one character even says he was raised from the dead by his rescuers, with light Romantic elements and minor influences of pantheism, plus strong Pro-American, somewhat capitalist theme of innovation and pioneering with some statements that go against leftist politically correctness; 16 obscenities (including one “f” word) and five profanities (including a few uses involving name of Jesus); strong, intense action sequences in space, on planets with dangerous ecological elements, explosions, one character attempts to kill another man by throwing him off a cliff but fails, another man is punched, dead body floats in water; no sexual content, just one kiss; no nudity; light drinking; no smoking or drugs; and, a character tells a major lie that puts others in danger but this is rebuked and another character starts destroying someone else’s crops.

INTERSTELLAR is a riveting science fiction adventure from Director/Writer Christopher Nolan (THE DARK KNIGHT RISES, INCEPTION). INTERSTELLAR has some strong moral, redemptive values and messages within its characters, including Christian references, but there are some significant worldview problems, especially towards the end.

Set sometime in the future, Earth has been devastated. Plagued by dust storms that has wrecked the agriculture and clearly have killed the majority of Earth’s population.

Cooper (Matthew McConaughey), a former pilot, grows corn on his farm, one of the last food sources they are able to grow. A widower, Cooper has a deep bond with his young son and daughter, Tom and Murph. Tom wants to pursue farming and Murph, a daughter after Cooper’s own heart, is more of a problem solver with an interest in science.

A series of random events that are unexplainable by science seem to be pointing Cooper to an undisclosed location, as if someone, or something, is drawing him there. Cooper investigates with his daughter Murph and discovers a secret NASA facility led by Cooper’s former mentor, Professor Brand (Michael Caine). Brand explains to Cooper that earth is deteriorating and there’s nothing they can do to stop it. If they don’t leave earth, the next generation will be the last.

NASA has found a wormhole outside of Saturn they believe can connect regions of spacetime that have been separated. If entered, the wormhole will allow humans to travel to distant galaxies with possible habitable planets. Since Cooper showed up on their doorstep right in the nick of time, Brand asks him to pilot the spaceship that will hopefully find their new home.

Knowing that if the mission fails, the human race will die, Cooper agrees to undertake the mission. Not being able to guarantee if or when he’ll return, Cooper leaves Tom and Murph in the hands of his father-in-law. Murph is devastated and furious at her father for leaving and refuses to say goodbye.

Along with fellow scientist and the Professor’s own daughter, Amelia Brand (Anne Hathaway), and two other scientists, Cooper launches a spacecraft into space to explore the unknown. Cooper is resolved not only to keep his promise to return to his children, but to provide them and future generations a habitable home. Cooper’s journey to unknown regions of the universe, traveling between space and time, pushes him against impossible odds in unimaginable circumstances.

INTERSTELLAR is a cinematic experience that is deeply contemplative. The movie takes time to develop and has a few odd editing choices with jump cuts, but it’s mostly a thrilling immersive adventure, both emotionally and visually. Grounded in reality, INTERSTELLAR does its best to use real science, though much of it is theoretical. Even the devastation of earth is borrowed from past disasters such as the Dust Bowl in the 1930s and the Irish Potato Famine in 1845. The reason for Earth’s deterioration is mostly ambiguous, however. Also, the movie implies that the planet’s eventual un-habitability is inevitable and perhaps even designed.

The movie’s epic vastness puts the story firmly into the science fiction genre. That said, at its core, INTERSTELLAR is a family drama about a father who desperately misses and loves his daughter, and a daughter who’s unable to forgive her father. The incredible visual aspect to the story will awe audiences, but the intense, powerful human story will move and inspire them. Strong performances by Matthew McConaughey and Mackenzie Foy as Murph, when she’s young, ground viewers in the story. The conflict and tension is extremely high and the odds seem impossible, keeping this story extremely entertaining.

It’s also worth recognizing the craftsmanship in which Nolan creates his sets and visuals and chooses to use practical visual effects rather than computer generated images. The gorgeous canvases of both space and earth as experienced in IMAX 70mm is a museum of rich images added by a majestic score provided by the great Hans Zimmer.

(SPOILERS FOLLOW) To really examine INTERSTELLAR’s worldview content requires some spoilers. First, its characters at the beginning are guided by an outer force that they refer to as “they” or “them.” Whether it be other human beings, aliens or supernatural, they don’t know, but they follow it anyways. Without giving too much away, it’s ultimately discovered that man, through the determination of the human spirit, is the sole responsible agent for his future existence. Mankind, interconnected, more biologically than spiritually, looks out for its own existence, because we’re survivors. This “oneness” idea isn’t thoroughly pursued in the movie, but its presence is borrowed from pantheistic ideas.

The worldview is primarily humanist existentialism, especially at the end, but it’s not the only worldview represented. The outlook provided by the characters is extremely positive and optimistic, truly believing, not only in meaning and purpose, but also in hope. Even some Romanticism is pursued, as when Amelia Brand says, “Love is the one thing that transcends time and space.” Though romantic love is briefly touched upon when Amelia desires to follow her heart, Cooper exhibits a redemptive, moral kind of love guided by a love for his family that is much more grounded.

Happily, INSTERSTELLAR has some strong moral, redemptive values and messages within its characters, including Christian references. Cooper is a good father, forced to make an impossible decision to leave his family so he can save them. Throughout the movie, he pursues moral choices and fights to protect others. Additionally, there are messages of forgiveness, courage, reconciliation, love, and selflessness. A former mission is named after the Bible figure Lazarus, and one character from this mission even says his rescuers raised him from the dead.

The main message in INTERSTELLAR lies in its point that mankind should pursue space travel, because creative human beings are explorers and innovators. This spirit of pioneering is even patriotic, and it’s this mindset that pushed America to become what it is, a leading nation. Engrained in the movie is a theme of innovation, entrepreneurship and visionary creativity for the betterment of man. There’s even an anti-politically correct moment when Cooper confronts the government school for trying to brainwash his children into believing that the Apollo missions were faked.

The worldview is mixed, because clearly, the filmmakers are asking a lot of questions, but are finding the answers in various worldviews and ideas. Sadly, none of the worldviews pursued, other than the Biblical worldview, gives a holistic perspective and blueprint of life. The Bible answers all of the questions INTERSTELLAR raises. For example:

There is indeed hope for mankind: Jesus Christ.

We do all have a commonality: We are made in the image of God.

The plot even makes it clear that man needs interceding and help, something that’s entirely Biblical, but the intercession made in the movie isn’t what humanity really needs. Ironically, the answer they give actually results in the main plot hole of the movie and its theoretical time travel idea. If the filmmakers had followed a Biblical worldview more closely, they would have resolved this problem.

There is very little violence in INTERSTELLAR, but the action sequences are still intense. A strong caution is advised for brief strong foul language and a mixed worldview that’s ultimately influenced by humanist existentialism, but with strong moral, redemptive values engrained in the characters. INTERSTELLAR is a very enjoyable movie and is definitely bound to be a conversation starter.