"What Will Your History Be? " 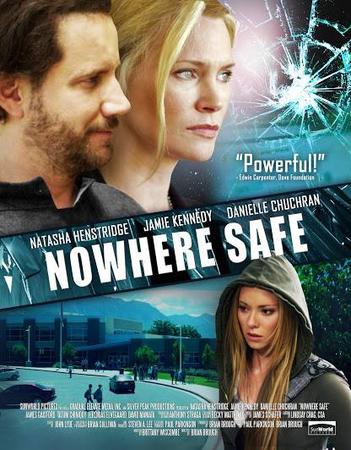 NOWHERE SAFE is based on the true story of a high school student who becomes a victim of cyber-bullying. Ashley must relocate to a new town to escape her ruined reputation and the escalating violence toward her and her mom. In a new school, she’s inspired by her eccentric history teacher to learn from the past and make a new history of her own life. Despite trouble fitting in at first, Ashley’s honest, moral example has a positive affect on her peers, and she begins to build a new reputation. However, her past catches up with her when those responsible for cyber-bullying her begin to use the same tactics on her new friends. Ashley must find a way to prove her innocence and restore the trust of those closest to her.

NOWHERE SAFE is a quality production with strong morally uplifting messages. Very little offensive content is found. When it is, it’s always rebuked in some way. NOWHERE SAFE provides a timely message about bullying for children of middle school and high school age. Younger children probably wouldn’t be interested in NOWHERE SAFE.

(BBB, CC, H, L, VV, N, M) Very strong moral worldview that often reflects Christian values, points out the faults of lying, bullying, insulting, falsely accusing other people, and offers forgiveness, rebukes those who try to harm others, promotes doing the right thing, with one humanist implication of being offended by the mention of God; two obscenities of one girl calling another girl an offensive name, one instance of “butt” and “crap”; brief scenes of vandalized home and vandalized locker, slap on the face, two girls fight, one girl gets punched in the nose and it produces a nose bleed, brief instances of bullies pushing and shoving at school, sword shown in a mannequin’s head as a prank; no sex, some kissing; upper male nudity in pool scenes, girls in modest swimsuits; no alcohol; no smoking, drugs, or alcohol; and, physical and cyber bullying, lying in attempts to ruin someone’s reputation, vandalism, and a divorced family, but these are meant to provide conflict and jeopardy for the story.

NOWHERE SAFE is a television movie based on a true story about cyber-bullying and the havoc that such it can wreak in someone’s life.

Ashley Johnson has become a victim when some jealous girls at her school decide to use a fake social media account posing as her to slander other students. This turns the entire small town against Ashley and her mother, Julie, forcing them to move and begin a new life elsewhere.

Julie quickly finds a job as the drama teacher in Ashley’s new school. Like most children, Ashley has difficulty adjusting, especially when a small group of “cool kids” are constantly teasing and bullying others, Ashley included. Only one boy, Max, seems interested in getting to know her.

Ashley ends up confronting Nick, the ringleader of the bullies, and attempts to do something nice for him, which causes him to rethink his negative behavior. As he begins to spend more time with Ashley, his conduct changes for the better, alienating his old friends and making his girlfriend jealous.

Meanwhile, Mr. Carlisle, the resident history teacher, uses his eccentric teaching methods to inspire the children to think about their own lives and how they fit into history. His antics provide most of the humor in the movie as he’s always dressing in elaborate costumes, borrowing props from Julie’s drama class, and acting out scenes from the past. He impresses the moral lessons of history upon his class while tying them to the present, always ending with the phrase “what will your history be?” Julie and Mr. Carlisle become admirers of each other and find themselves slowly falling in love.

Things seem to be going well in Ashley’s new life until she runs into the girls from her old school, who were responsible for the cyber-bullying. Ashley’s antagonists are now friends with Nick’s jealous girlfriend. They show the fake social media account to everyone, spreading the same lies as before. Suddenly, Ashley’s history has caught up to her, ruining the good reputation she’s rebuilt. So, she must find a way to prove her innocence and restore the trust of those closest to her.

NOWHERE SAFE is filled with positive role models. First, there are the schoolteachers, who encourage moral thinking and behavior. Then, there’s Ashley whose attitude of doing the right thing brings about a positive change in values for some of her peers. Though there is plenty of bad behavior displayed, as would be the reality in many schools, it doesn’t go unpunished or is always rebuked. Though Ashley and Max are teased, they show a Christ-like example by turning the other cheek and not retaliating. Eventually, Ashley gets so much physical and emotional abuse from Nick’s girlfriend that she does fight back.

The production quality in NOWHERE SAFE is generally pretty good, and quite typical of a TV movie. The cinematography is pleasing to the eye and doesn’t get in the way of the story. Overall, the story is well done, with a few delightful, unexpected twists and some funny moments to lighten the mood, despite being a little slow and predictable in some places. Some character motivations are a bit unclear because they lack sufficient buildup. In addition, the constant musical soundtrack sometimes gets in the way, blatantly informing viewers what sort of mood the scene is supposed to invoke.

Ultimately, however, the average viewer will find NOWHERE SAFE entertaining and uplifting. It gives younger viewers especially quite a bit to chew on in regards to how children are treated in school and how they might react if they ever find themselves in similar situations to the characters. Caution is advised for young children due to the subject matter and some minor language, but NOWHERE SAFE is a very timely movie for children of middle school and high school age.