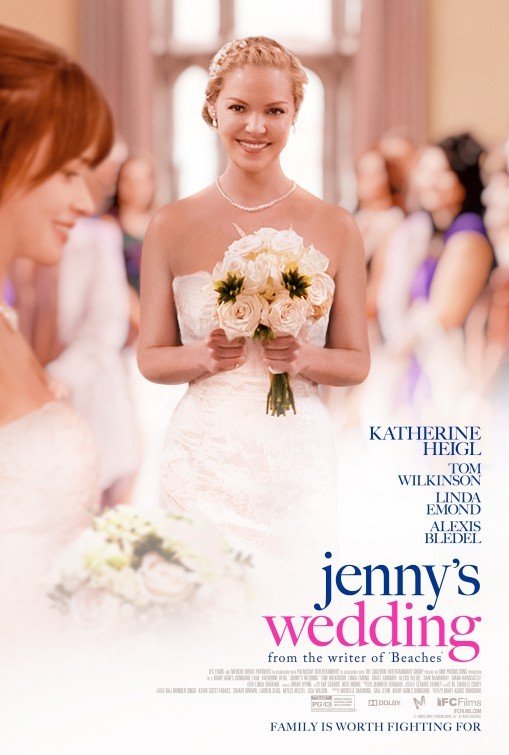 JENNY’S WEDDING stars Katherine Heigl as Jenny, a social worker from a Catholic family. Jenny’s hidden she’s a lesbian, telling her parents she just hasn’t found the right man to marry, for fear they would disown her. After reaching five years with her girlfriend, Jenny decides it’s time to tell them the truth and demand the same high-style wedding her heterosexual siblings received.

JENNY’S WEDDING is an endless slog through the family members wrestling with their feelings about the relationship. It’s a foregone conclusion that they will all realize they are being closed-minded and accept Jenny and her girlfriend as equals. So, in the end, Jenny will get her wedding. After all, JENNY’S WEDDING is the movie’s title. JENNY’S WEDDING is so one-note and obvious that it makes this movie artistically contemptible. In fact, it has nothing surprising and barely any laughs or moments of genuine emotion or tension. The same obvious song, with a chorus of “I Can’t Change,” is used at least three times during the movie’s endless montages. JENNY’S WEDDING has an abhorrent, politically correct, leftist Romantic worldview.

(RoRoRo, PCPCPC, HoHoHo, AbAbAb, L, V, SSS, A, D, MM) Very strong Romantic, politically correct worldview promoting homosexuality and same-sex marriages, lesbian protagonist’s family is Roman Catholic, but they come around to accept her homosexual behavior and same-sex marriage, so movie implicitly attacks Christian, biblical attitudes on sex, family and marriage; one BS and several light profanities; woman comically slaps her husband, saying he never helps out and asking for a divorce; very strong promotion of sexual immorality, specifically homosexuality, two women kiss at least two times, married woman thinking about a divorce is seen flirting with someone else, and two heterosexual marriages (including the title character’s parents) are shown as miserable, though the parents get happier by the end as they accept their daughter’s homosexuality and are inspired by her lesbian relationship with another woman; implied alcohol use at same-sex “wedding”; man secretly enjoys cigarette smoking; and, strong miscellaneous immorality as female protagonist lies to parents about her sexual predilections, telling them she just hadn’t met the right man, and an implicit attack on traditional heterosexual marriage, including promoting the idea that homosexual relationships can make miserable heterosexual marriage better.

JENNY’S WEDDING is an extremely boring, predictable and heavy-handed drama about a lesbian woman named Jenny who finally comes out as homosexual to her traditional Catholic family and demands the same kind of lavish wedding her straight siblings received. JENNY’S WEDDING has a very strong, abhorrent Romantic, politically correct, leftist worldview with very strong pro-homosexual messages.

The movie follows the story of Jenny (Katherine Heigl), a social worker from a deeply Catholic family. She has always hidden she’s a lesbian, claiming that she just had not found the right man to marry, for fear they would disown her. But after reaching five years with her girlfriend (Alexis Bledel), she decides it’s time to tell them the truth and demand the same high-style wedding her straight siblings received.

The movie from there is an endless slog through the family members wrestling with their feelings about the relationship, but it’s a foregone conclusion that they will all realize that they are closed-minded and will come to accept Jenny and her girlfriend as equals. So, in the end, Jenny will get her wedding. After all, JENNY’S WEDDING is the movie’s title.

There are no real subplots in JENNY’S WEDDING, other than her miserably married straight sister learning to stand up to her lazy husband, comically beating him up before throwing him out and demanding a divorce. Otherwise, the movie is a heavily padded 90 minute slog to the happy PC wedding.

Why and how this movie got funded and made is a mystery. With same-sex marriage already legal in a majority of states by the time this was filmed, the story’s message already seems outdated. Thus, it holds no point for the secular audiences and pro-homosexual activists. Certainly, no Christian or other person opposed to same-sex marriage is going to want to see this.

The fact that it is so one-note and obvious makes JENNY’S WEDDING artistically contemptible. The same obvious song, with a chorus of “I Can’t Change,” is used at least three times in the movie during its endless montages.

With nothing surprising and barely any laughs or moments of genuine emotion or tension, along with its heavy-handed pro-homosexual and pro same-sex marriage message, JENNY’S WEDDING is a must to avoid on artistic, moral and spiritual levels.