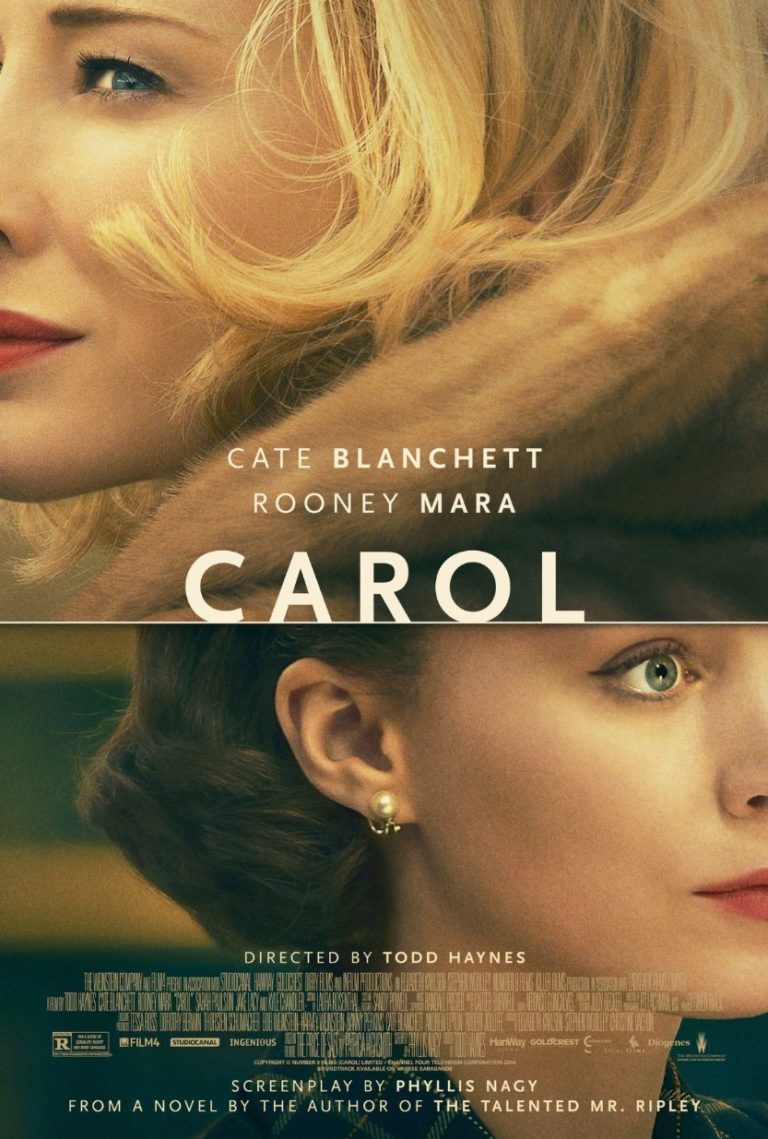 CAROL is a fictional tale depicting the story of an upper-crust wife in 1950s New York City named Carol, who finds herself transfixed by a younger saleslady named Therese. They meet at the perfume counter of a Macy’s-style department store. Carol is in a lifeless marriage to a man named Harge, who’s depicted as a one-dimensional paragon of white-privileged patriarchal power. A custody battle over Carol and Harge’s daughter ensues, including dirty tricks like spying on the lesbian lovers.

Plot twists in the second half create some surprises, and Director Todd Haynes wrings more tension from the script toward the end. However, the overall effect of CAROL is strangely inert. It plays like a museum piece and the movie’s married female protagonist comes off as cold and calculating. She wrecks havoc on her marriage and makes her husband suffer social embarrassment and emotional anguish. Then, she abandons her lover when it suits her. All that is apt for a movie that’s clearly calculated to promote a politically correct, homosexual agenda and get plenty of kudos during awards season. CAROL is abhorrent.

CAROL is the story of a lesbian affair between a married mother and a younger department-store saleslady, and the impact it has on their lives during the 1950s. CAROL has an unsympathetic protagonist and a very strong and abhorrent Romantic, politically correct, homosexual, and radical feminist worldview that implicitly attacks traditional views of marriage.

Based on a 1952 novel reportedly popular with lesbians in the 1950s, CAROL is a fictional tale, depicting the story of an upper-crust wife in 1950s New York City named Carol (Cate Blanchett), who finds herself transfixed by a younger saleslady named Therese (Rooney Mara). They meet at the perfume counter of a Macy’s-style department store. Carol is in a lifeless marriage to a man named Harge (Kyle Chandler), who is such a one-dimensional paragon of white-privileged patriarchal power that viewers only see him pining for and demanding loyalty from Carol. The movie doesn’t even tell what Harge does for a living.

That’s par for the course with this movie, since viewers also never learn what Therese really wants out of life, or why she would abruptly abandon her own serious relationship with a much nicer guy named Richard (Jake Lacy). Carol herself is a cipher much of the time, with the only moments of intrigue coming from the revelation that she had previously engaged in a relationship with her lifelong friend, Abby (Sarah Paulson), leaving Harge in despair as he sees her take up with Therese.

A custody battle over their daughter Rindi (names like Harge and Rindi should indicate the isolated bubble-world where these characters live) ensues, including dirty tricks like spying on the new lovers. This creates a couple of surprises, and Haynes wrings more tension from the script by Phyllis Nagy towards the end, but the overall effect of CAROL is strangely inert.

On an artistic level aside from moral and spiritual considerations, CAROL suffers from the fact it’s set in a time and era that has long since passed. This makes the movie seem like an instant museum piece. Strangely, it winds up being counterintuitive to its own agenda, because the title character features a woman who wreaks havoc on her marriage, coldly making her husband suffer both social embarrassment and emotional anguish, while also shutting out her past lesbian lover as well as her current one when her whims dictate it’s necessary.

Rather than being a sympathetic character, the title character comes off as a mostly calculating one. That is apt for a movie that’s clearly calculated to promote a politically correct, homosexual agenda and get plenty of awards from leftist Oscar voters and leftist movie critics. CAROL is meant only for viewers who lean left on the issue of homosexual “civil rights” and other liberal talking points. It’s unlikely to move anyone else at all. CAROL also contains some lewd content and explicit nudity.