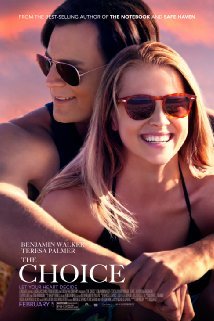 THE CHOICE is yet another romance based on a Nicholas Sparks novel. Gabby is very focused on becoming a doctor, but gets distracted from studying because of the loud partying from her neighbor, Travis. When Gabby believes her dog has become pregnant from her neighbor’s dog, she confronts Travis. Travis suggests a veterinarian, who turns out to be his father, who, as it turns out, employs Travis. So, the two have to see each other every time Gabby takes her dog to the vet. Sparks begin to fly between Gabby and Travis, but Gabby already has a boyfriend, and Travis doesn’t share her Christian faith.

THE CHOICE is a typical Nicholas Sparks movie, with lots of romance and some overt Christian references, but it’s marred by poor quality, some unsuccessful acting and sexual impurity. As is common with such Nicholas Sparks movies, the setting is beautiful and the story predictable, though entertaining. Gabby successfully defends her belief in God, but immediately thereafter sleeps with Travis. The ending does extol marriage, though THE CHOICE has plenty of foul language. Extreme caution is advised.

(RoRo, C, B, H, LLL, V, S, N, A, M) Predominantly Romantic worldview of follow your heart with some Christian content when main characters have a conversation about God, the main actress takes the leading man to church, but he still makes an argument for humanism though may ultimately come to faith; 23 obscenities, 12 profanities, and woman uses middle finger; car accident; sex outside of marriage, also character is sleeping with someone who is not her boyfriend; upper male nudity; light drinking; no smoking or drug use; and, lying.

THE CHOICE is a romance about a young woman who doesn’t care for her new neighbor until, unexpectedly, they come together. THE CHOICE is a typical Nicholas Sparks movie, with romance and Christian references, but it’s marred by poor quality, foul language and sexual impurity.

Gabby is very focused on becoming a doctor, but gets distracted from studying by her loud partying neighbor, Travis. When Gabby believes her dog has become pregnant from his dog, she confronts Travis. Travis suggests a veterinarian, and it turns out to be his father, for whom Travis works as well. It turns out that it’s not Travis’ dog who got the dog pregnant. The two accidently bump into each other at the fair, but Travis has a girl with him, and Gabby has her doctor boyfriend.

When Gabby’s boyfriend goes out of town for a couple of weeks, Travis invites Gabby on his boat. Later that night, Gabby invites Travis to a home cooked meal. The two seem to be falling in love, but Travis doesn’t believe in God, and Gabby is already in a relationship. Travis’ sister also tells Travis that she believes this is his wife, because she challenges him.

It isn’t long before Gabby’s boyfriend comes home from his travels, and Gabby is confronted with her options. Deciding to go with her boyfriend, she gives up on Travis, even though he declared his love for her. Will they be able to find true love in the midst of all the obstacles?

THE CHOICE is the eleventh Nicholas Sparks novel to be brought to the screen. Overall the quality was a little lacking, including some poor performances. The storyline is typical for Sparks’ movies, though his fans seem to enjoy the common themes, seeing the success of the books and past movies. Also, as is common with Nicholas’ novels and movies, the setting is beautiful, but the story is predictable, though entertaining.

THE CHOICE has both Romantic and Christian content. The main character, Gabby says she believes in God and makes a great argument for God, but immediately thereafter sleeps with Travis and is unfaithful to her boyfriend. Travis makes an argument for her to go with her heart, and he himself is a humanist. Though marriage is extolled by the movie’s end, premarital sex is never acceptable, especially when you cheat on your boyfriend or girlfriend. On a positive note, THE CHOICE has a pro-life message, but its positives are marred by the promiscuity and plenty of foul language.