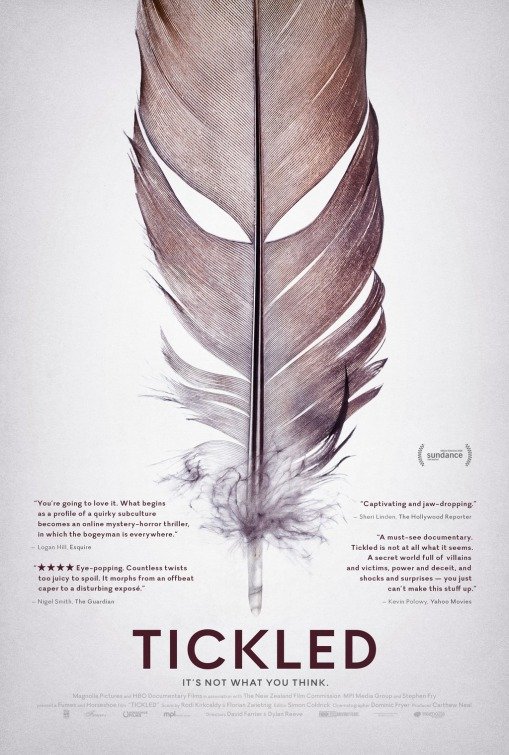 (PaPa, B, PCPC, HoHo, LL, V, SS, NN, DD, MM) Strong slightly mixed pagan worldview with some moral elements about trying to expose blackmail plots and help victims, but with some politically correct and pagan elements involving homosexuality and forms of sadomasochism and fetishism, some of which has become an underground pornography movement; 10 to 12 obscenities (mostly “f” words); no violence, but some threats of violence, including death threats; strong sexual content includes several scenes of men bound at their wrists and ankles and then tickled by several other men, one scene shows a porn filmmaker tickling a shirtless man in slow motion, and filmmaker admits he’s doing it for homosexual audiences, others admit the tickling is a form of sadomasochism, and it’s reported that some young men involved in the underground videos have been blackmailed; upper male nudity in one scene seems particularly homoerotic, other scenes not so much; no alcohol use; a reference to drug use; and, threats against the documentary filmmakers, blackmail against some of the young men in the tickling videos, lying, and attempted cover-ups to avoid legal issues involving possible criminality.

TICKLED is a sometimes humorous, sometimes mysterious, bizarre documentary about two directors trying to find out why strange men are filming videos about “competitive endurance tickling,” with one of the men blackmailing the young men who are his subjects. TICKLED has a strong, slightly mixed pagan worldview that includes some strong foul language and lewd subject matter, including homosexual references.

The movie follows two directors, who are a New Zealand journalist named David Farrier and his friend, documentary filmmaker Dylan Reeve. David and Dylan investigate a series of strange videos David finds online involving “competitive endurance tickling.” In these videos, athletic young men who claim to be heterosexual are filmed being restrained at the wrists and ankles before they are straddled by other ostensibly straight young men and tickled until they’re gasping for air.

The documentarians find these videos to be an extremely narrow market and wonder why they’re made and who the audience is. David is homosexual and receives a threatening note filled with slurs. So, he asks Dylan’s help in investigating the bizarre underground movement. As they dig deeper, they find many of the young men filmed in the fetish videos were later blackmailed, with the videos sent to their mothers and other relatives to embarrass them.

As it goes along, TICKLED takes on a true air of mystery that’s compelling. It also contains a strong sense of justice as the filmmakers try to find out the identities of the mysterious people running one video-making ring, in order to stop them from ruining more lives and reputations through the blackmail schemes. Thus, despite its offensive subject matter, TICKLED has some moral elements in its second half.