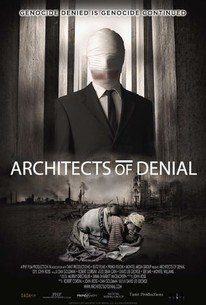 ARCHITECTS OF DENIAL is a documentary exposing the 1915 Muslim genocide in Turkey of the oldest Christian community, the Armenians. The Turks continue to deny that this genocide took place. Also, the Armenian genocide has never been recognized by Britain or America. Therefore, it continues up until 2016 and probably to this day. The movie interviews a multitude of experts and witnesses to tell the stories and reveal the evidence showing that the Armenian genocide is irrefutable. The personal stories are heartbreaking. The filmmakers reveal that Muslim governments in Central Asia have paid off American Congressmen to keep their continued genocide against Christians quiet.

ARCHITECTS OF DENIAL is an important backstory to one of MOVIEGUIDE®’s favorite movies, THE PROMISE. Be careful, however. The movie contains a lot of documentary footage, with scenes showing killings, beheadings, Muslims taking ears as souvenirs, images of skulls, and other horrible atrocities. ARCHITECTS OF DENIAL shouldn’t be watched by susceptible and vulnerable adults, and not at all by young children. Older teenagers and adults need to know what’s happening, so ARCHITECTS OF DENIAL is recommended for them.

(CCC, VV, S, NN, M) Extremely strong Christian content about Christians being persecuted focusing on the Armenian holocaust and including subsequent persecutions, even referring to the persecution and killing of Christians in Rwanda and other genocides, including the Jewish Holocaust, the Cambodian Killing Fields and others; no foul language; strong reports of violence and documentary footage of violence, including naked bodies being thrown into ditches, skulls, beheadings, corpses shown with their ears ripped off, people killed with their private parts showing, and many other pictures and documentary scenes of genocide; no visual sex, but stories of rape and the impaling of women by Muslims; documentary war genocide photos of full nudity includes naked females thrown into a ditch and naked men and boys with their private parts showing if you look closely at the photographs; no alcohol; no smoking or drugs; and, constant mendacity, dissimulation, lying, and denial by Muslim leaders and the people in the United States government, including Congressmen, senators and presidents who have been bribed or financially influenced.

ARCHITECTS OF DENIAL is one of those rare, well-structured, jeopardy filled documentaries that must be seen by mature audiences. It was brave for Dean Cain and Montel Williams to produce this movie. The movie’s subtitle expresses the truth that everyone should embrace: Genocide denied is genocide continued.

The movie’s focus is the 1915 Muslim genocide of the oldest Christian group, the Armenians. The Turks continue to deny this genocide took place. Also, the Armenian genocide has never been recognized by Britain or America, although other Western countries, such as France, do recognize it. So, it continues up until 2016 and probably to this day. The movie brings forth a multitude of experts and witnesses to tell the stories and reveal the evidence showing that the Turkish Armenian genocide is irrefutable.

The personal stories are heartbreaking. One world-famous musician, George Pehlivanian, is a famous French musician and conductor and is the only survivor of his family after 80 members of his family were killed one day in 1915.

The genocide killings were not just executions but sometimes grotesque tortures and rapes. After the women were raped, they were impaled on stakes through their private parts as they slowly died.

The movie also reveals some of the recently discovered documents written by the highest level Turkish officials in 1915 calling for the annihilation of the Armenians. The evidence is so clear that several Muslim scholars have called for Turkey to admit the genocide for the country’s own sake. Also, several members of the British Parliament and the U.S. State department testify that they bore witness to the massacres that occurred more recently in Azerbaijan. The Azerbaijan Turks massacred Armenians who had been living there for thousands of years in 1988, 1990, 1991, and 2016.

Why does this genocide continue? Because governments won’t call it what it is and stand together to stop it.

The movie not only interviews several Congressmen who have been bought off or influenced by the oil money of Azerbaijan. The movie details how Dennis Hastert, former Speaker of the House, was paid in drug money, illegal oil funds and in sexual parties with young boys when he visited the Middle Eastern countries in question. As you may recall, he went to jail for paying off a young man he had molested and abused.

Watching the Congressmen avoid the questions makes you realize we must clean the swamp of all the filthy lucre being used to buy votes and of those who have been corrupted. Among the Congressmen refusing to talk about the Armenian suicide are Rep. Joe Wilson, Rep. Virginia Foxx and Rep. Glenn Thompson. Sadly, these Congress people belong to both parties.

By the end of the movie, it’s clear that it’s Christians who are being persecuted, that the desire of the Muslims is to kill Christians, and that justice will not be done until genocide is refuted, stigmatized and stopped.

ARCHITECTS OF DENIAL is an important backstory to one of MOVIEGUIDE®’s favorite movies this year, THE PROMISE. Be careful, however. The movie contains a lot of documentary footage, with scenes showing killings, beheadings, Muslims taking ears as souvenirs, images of skulls, and other horrible atrocities, with the latest occurring in 2016. This is documentary footage, so it doesn’t have the power of such grotesque violence in dramatic movies, but it shouldn’t be watched by susceptible and vulnerable adults, and not at all by young children. Older teenagers and adults need to know what’s happening, so ARCHITECTS OF DENIAL is recommended for them.