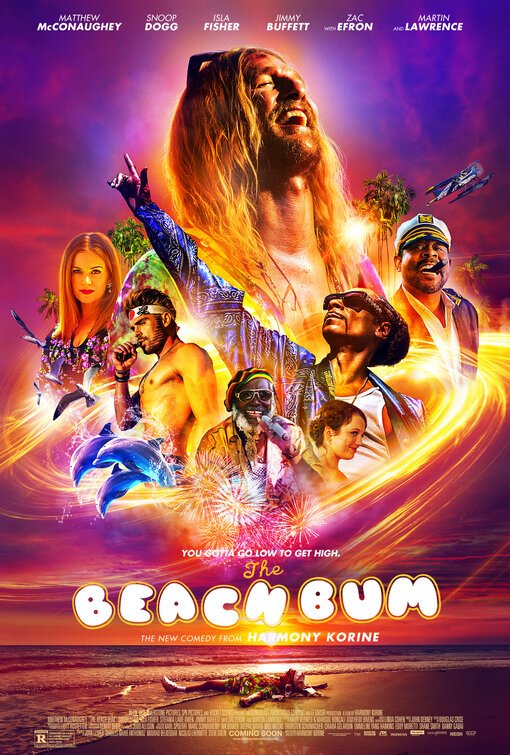 THE BEACH BUM is a hedonistic comedy starring Matthew McConaughey in the title role of an always-stoned, acclaimed hippie poet who magically laughs his way through life. Perpetually stoned and drunk, with a devil-may-care attitude, Moondog magically laughs his way through life, barely noticing the pain of other people, some of which he himself causes. He and his wife, Minnie, cheat on one another. When they take a stoned ride together in his car the night of their daughter’s wedding and crash, Minnie dies. Moondog suffers a momentary reality check, but he’s soon back to his hedonistic ways.

THE BEACH BUM is part comedy and part satire, and not very realistic. So, it’s intended not to be taken seriously. That said, Moondog laughs his way through almost everything that happens, even when other people get seriously hurt or die. Worse, he himself suffers no serious consequences for his actions, some of which are pretty abhorrent. THE BEACH BUM is a disgusting movie that rewards blatant, narcissistic hedonism and substance abuse, and that contains abundant lewd content and foul language, plus some extreme violence.

(PaPaPa, C, HoHo, LLL, VVV, SSS, NN, AAA, DDD, MM):
Dominant Worldview and Other Worldview Content/Elements:
Very strong pagan, hedonistic worldview where title character’s narcissistic and hedonistic attitude and behavior is almost always rewarded, even after tragedy or mishaps occur, with some light or brief Christian references such as a Christian pastor sincerely reads some words at a funeral but nothing really morally uplifting, plus a man starts wearing women’s dresses toward the end of the movie when a friend suggests that, because the police are looking for him, he should wear a disguise but the man’s real identity is still perfectly clear
Foul Language:
at least 138 obscenities (including many “f” words), three GDs, seven light profanities, and some vulgarities
Violence:
Some extreme violence such as a shark bites off a man’s foot, and another man hands the man his severed foot in exchange for the injured man’s sea captain’s hat, and young drug addict viciously smashes a bottle over the head of a man in a wheelchair, and the wheelchair and the man keel over, plus a head-on collision caused by impaired driving results in woman passenger’s death, man deliberately sets fire to a boat, and boat explodes, stoned people deliberately trash living room furniture, and stoned man deliberately pushes people into the ocean for laughs and deliberately shoves a woman in a wheelchair (it’s not shown if she gets hurt or not as her wheelchair goes flying down the cement in a fancy pool area)
Sex:
Extreme sexual content includes scenes with depicted fornication, marital sex, adultery, oral sex, and spanking, plus crude sexual talk includes two adult men crudely discuss the sexual equipment and behavior of dolphins in front of two underage children
Nudity:
Many images of upper female nudity and some rear male and female nudity
Alcohol Use:
Nearly constant alcohol use and abuse, and one drunken escapade results in a deadly traffic accident
Smoking and/or Drug Use and Abuse:
Some cigarette and cigar smoking, constant marijuana use often played for laughs, and some cocaine snorting; and,
Miscellaneous Immorality:
Extreme miscellaneous immorality such as perpetually stoned man suffers no consequences for his evil or careless actions, man is never put in jail for being an accomplice to his friend’s brutal assault and robbery of a man in a wheelchair, man laughs at other people’s misfortunes, but his laughs and chuckles almost seem to be like a nervous tic he can’t stop, vandalism, man escapes from a court-ordered rehab facility, etc.

THE BEACH BUM is a hedonistic comedy starring Matthew McConaughey in the title role of an always-stoned, acclaimed hippie poet who magically laughs his way through life, barely noticing the pain of other people, some of which he causes. THE BEACH BUM is a disgusting movie that rewards blatant, narcissistic hedonism and substance abuse and that contains abundant lewd content and some extreme violence.

In the movie, McConaughey plays Moondog, a perpetually drunken stoner who’s resting on his previous laurels as an acclaimed poet. However, Moondog hasn’t published anything in years, his agent has stopped trying to get him speaking gigs, and he and his beautiful wife, Minnie, cheat on one another while Moondog lives in Key West, and she lives in their fancy home in Miami Beach.

The movie’s early scenes in Key West set the stage for Moondog’s lifestyle, a lifestyle of drunken, pot-filled parties, bar drinking, flirting with semi-nude or scantily clad women, and sex. In between all this, Moondog spouts lewd, pretentious poems he’s written, while people cheer and say how brilliant he is.

In a telephone call, Minnie (played by Isla Fisher) reminds Moondog that their 20-year-old daughter, Heather, is getting married in a few days, and he needs to return to Miami Beach. So, Moondog hops aboard his little, rundown motorboat and speeds his way up to her. On the pier next to their mansion, she greets him with great romantic fanfare, even though she’s having a torrid affair with a perpetually stoned black rapper, Lingerie, who’s played by real-life stoned black rapper, Snoop Dogg.

After spending a torrid afternoon poolside with Minnie, in front of the servants no less, Moondog drives off in his fancy convertible to indulge in the Miami Beach nightlife for stoners. He crudely hooks up with several naked ladies along the way. However, the next morning, he’s late for his daughter’s wedding, but barges in just as the bride and groom are about to say their vows.

That night, Moondog keeps smoking pot, drinking beer, and flirting with women. When he catches his wife passionately kissing her lover, Lingerie, he’s amazed and stumbles off down the street. However, Minnie catches up with him, and they spend the night together out on the town, drinking more alcohol and smoking more marijuana. Then, Moondog gets behind the wheel of his car, a head-on collision occurs, and Minnie dies in the hospital.

After the funeral, the lawyer tells Moondog that Minnie’s will denies him access to half of her multimillion dollar fortune, including the use of the car and their mansion. To get the money, he must finish the novel he’s been promising to write. Moondog sets down to business but soon gets distracted and returns to his hedonistic ways. Stoned out of his gourd, Moondog leads a bunch of homeless men back to his wealthy home and trashes it. He’s arrested, and the judge orders him to spend 12 months at a rehab facility.

For a couple days, it looks like Moondog may settle down, but he runs into a young drug addict nicknamed Flicker, the spoiled son of a wealthy man, and it’s off to the races again. Moondog and Flicker escape from the rehab facility and get stoned. To get some money, Flicker viciously hits a man in a wheelchair and robs his wad of cash.

As more crazy and sometimes violent shenanigans and mishaps occur, Moondog eventually tells a local reporter his philosophy of life. Life is too short to worry about anything, Moondog explains, so having fun is the end-all and be-all of life. Not only that, but Moondog firmly believes that the universe magically conspires to bring him nothing but happiness and luck. Will Moondog’s philosophy turn out to be true? You bet!

THE BEACH BUM is part comedy and part satire, and not very realistic, so the movie and everyone in it seem to have their tongues in their cheeks. Thus, the movie’s not intended to be taken seriously. Even so, Moondog laughs his way through almost everything that happens, even when other people get seriously hurt or die. For example, when a stoned friend gets his foot chomped off by a shark because he mistakes the shark for a dolphin, Moondog just laughs and eventually hands back the man’s severed foot as the man’s wheeled into an ambulance. Though he does display some sad feelings for Minnie’s affair with the rapper and her eventual death, neither situation really or truly affects him, or makes him change his narcissistic, hedonistic ways. Worse, he himself suffers no serious consequences for his actions, even when the young drug addict viciously assaults the man in the wheelchair. In fact, he’s always rewarded in some way, no matter what.

THE BEACH BUM is the epitome of the archetypal story where an evil man triumphs by quirks of fate, with abundant foul language, extreme sexual content, much explicit nudity, and constant substance abuse. THE BEACH BUM is thoroughly abhorrent and disgusting. Some of the faux poetry in the movie, which comes from several real-life iconoclastic poets like Richard Brautigan, is just inane and pretentious, and even obscene, showing how empty and ludicrous too much of modern art, including some of what passes for cinema these days, has become.