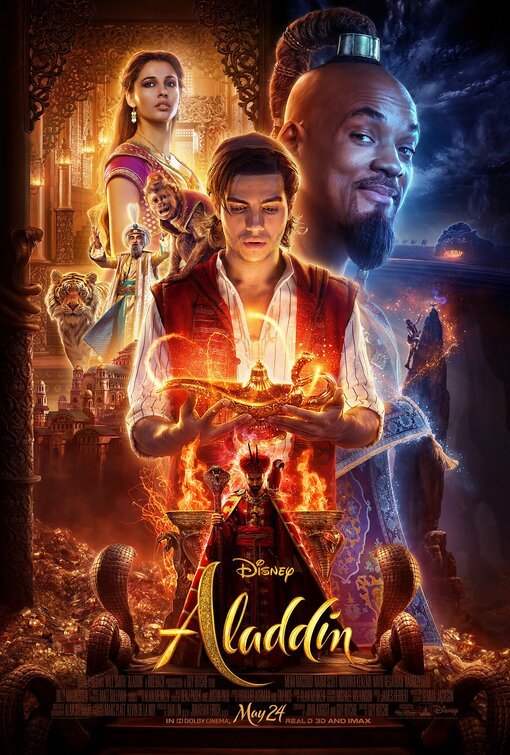 ALADDIN is a spirited live action remake of Disney’s classic 1992 cartoon. Will Smith plays the role of the blue genie who helps Aladdin, a kindhearted Arab street urchin, win the heart and hand of a beautiful princess, the Sultan’s daughter. The Sultan’s evil advisor, Jafar, uses Aladdin and Aladdin’s pet monkey to retrieve a magical lamp in the Cave of Wonders. However, Aladdin ends up with the lamp. After the Genie introduces Aladdin to his powers, Aladdin decides to ask the Genie to make him a prince so he can woo Princess Jasmine. Naturally, of course, the best laid plans of a street urchin and his pet monkey often go astray.

ALADDIN is superlative family entertainment. There are many soaring and poignant moments in the new ALADDIN. The action is thrilling and lively. The cast does a great job, including Will Smith as the Genie. Also, the musical numbers are beautifully staged and choreographed. Even better, ALADDIN has a strong moral worldview that celebrates freedom against tyranny and slavery. ALADDIN also celebrates truth, honesty, justice, courage, family, compassion, and doing the right thing.

(BBB, PP, ACAC, Ro, Pa, PC, FeFe, FR, V, M):
Dominant Worldview and Other Worldview Content/Elements:
Very strong moral worldview overall that celebrates freedom against tyranny and slavery, as well as celebrates truth, justice, courage, humility, family, and doing the right thing, which are sometimes contrasted at important points with the Romantic, pagan values of greed, cruelty and lust for power, but there are some slightly politically correct feminist elements supporting feminist empowerment, but those elements also become folded into the movie’s strong moral worldview supporting freedom and the power, responsibility and rights of the individual, plus a couple male characters wear Muslim type hats but there are no references to Islam, Allah or Mohammed that we could detect
Foul Language:
No foul language
Violence:
Light, sometime comical, action violence such as city guards keep law and order and threaten and chase people who might be thieves or who are accused of stealing, hero and heroine climb walls and jump around to avoid capture by guards and irate man, hero is tied up and pushed into the ocean where he almost drowns, hero tumbles down a high rock in a magical cave but survives, hero pretends to fall from a high balcony but he’s actually saved by a magic carpet that he had placed under himself, villain steps on hero’s hand as hero clings to a ledge, heroine has a pet tiger who snarls at and threatens other people who might harm her, villain threatens to kill people opposing him, some light fighting and scuffling, etc.
Sex:
No sex, but brief kissing
Nudity:
Partial upper male nudity in one or two male costumes
Alcohol Use:
No alcohol use
Smoking and/or Drug Use and Abuse:
No smoking or drugs; and,
Miscellaneous Immorality:
Some stealing and deceit but rebuked, male genie comically appears as one of the women from a balcony cheering a prince as he enters the city, and there’s an evil sorcerer whose sorcery is ultimately rebuked and defeated.

ALADDIN is a spirited live action remake of Disney’s classic 1992 cartoon with Will Smith playing the role of the blue genie, who helps a kindhearted Arab street urchin win the heart and hand of a beautiful princess. Beautifully put together, the live action ALADDIN is as wonderfully entertaining as the original cartoon, with many positive messages celebrating truth, honesty, justice, compassion, courage, humility, freedom, family, and doing the right thing.

The movie opens with Will Smith as a sailor telling his two young children the story of Aladdin and the magic lamp. He opens with a song about the wonders and dangers of Agrabah, a fictional port city in Arabia.

Aladdin and his pet monkey, Abu, get in trouble for stealing some food from a vendor. When Aladdin gets away with his petty crime, he ends up giving the food to a couple starving children.

In the next scene, Aladdin and Abu run into a beautiful young woman who Aladdin thinks must be a handmaiden who serves the Sultan’s daughter. Calling herself Dalia, the woman takes two pieces of bread from a vendor and gives them to two hungry children. The vendor forcibly takes Dalia’s bracelet in payment, but Aladdin steals back the bracelet and a chase ensues. Aladdin and Dalia escape, and Aladdin takes her to where he lives. However, Aladdin’s monkey, Abu, has taken the bracelet and hidden it, and Dalia leaves angrily when Aladdin blames the monkey.

Of course, it turns out Dalia is really the Sultan’s daughter, Jasmine. Aladdin sneaks into the palace to return the bracelet and discovers Jasmine’s real identity.

Jafar, the Sultan’s evil Grand Vizier who wants to replace the Sultan, thinks Aladdin can help him retrieve a magical lamp from the Cave of Wonders. Things go wrong, however. Aladdin and Abu become trapped in the Cave of Wonders. Jafar takes the lamp, but Abu secretly steals it back from him just before the magical entrance to the cave closes.

Still trapped in the cave, Aladdin discovers that the lamp houses a powerful Genie who can grant Aladdin three wishes. After the Genie introduces Aladdin to his powers, Aladdin decides his first two wishes to the Genie are to 1) Get them out of the Cave of Wonders and 2) Make Aladdin a prince so he can woo Princess Jasmine. Aladdin promises the Genie that his third wish will be to give the Genie his freedom.

Naturally, of course, the best laid plans of a street urchin and his pet monkey often go astray. Eventually, Aladdin and Princess Jasmine must work together to stop Jafar from throwing them all into the dungeon and from becoming a powerful tyrant.

Like its original animated movie, Disney has fashioned a totally entertaining, visually captivating version of the classic story taken from an edited version of ONE THOUSAND AND ONE NIGHTS, British explorer Richard Burton’s English translation of Arab and Asian folk tales. There are many soaring and poignant moments in the new ALADDIN. The action is thrilling and lively. Also, the musical numbers are beautifully staged and choreographed by Director Guy Richie and his team. The iconic number between Aladdin and Jasmine, “A Whole New World,” gets new life in this live action version. In fact, because it is live action, there’s a new spirit of wonder in the number. Even better, the number comes across as a beautiful statement of the future joys that a serious romantic relationship between a man and a woman, one leading to marriage, can create as the man leads his future bride to “a whole new world,” but in a way where the woman will also lead her future groom. The number may remind long-married people of the wonder and joys that awaited them when they themselves first got engaged and first got married. It may also inspire young people who have media-wise parents, grandparents and teachers to guide them. ALADDIN is truly Guy Ritchie’s best effort since he began directing in 1998. He also co-wrote the screenplay, which takes the script for the original animated feature and gives it some great new live action twists.

Though no one can replace Robin Williams’ performance as the Genie in the original animated movie, Will Smith takes the role of the Genie and makes it his own while still paying homage to Robin’s beloved, eccentric performance. He also plays the sailor who opens the movie with a lot of heart. That opening sets the stage for the rest of the movie. Mena Massoud and Naomie Scott are perfect as Aladdin and Princess Jasmine, and Marwan Kenzari is appropriately menacing as Jafar, the evil Grand Vizier.

ALADDIN has a strong moral worldview that celebrates freedom against tyranny and slavery. It also celebrates truth, honesty, justice, compassion, courage, humility, family, and doing the right thing. These positive values are often contrasted with greed, cruelty and lust for power. Also, at a wonderful point in the story, Aladdin, who’s portrayed as a roguish thief, must decide whether to pursue his personal dreams or let Princess Jasmine know the truth about his personal identity. Happily, he decides in favor of truth and honesty.

There are some light Romantic, pagan elements in ALADDIN where characters defy the law or pursue their own personal desires, but even here the movie returns to the morally uplifting center that eventually resolves the conflicts in the story and that ultimately defines the movie’s main themes and messages. Also, Princess Jasmine is depicted as a proto-feminist who chafes at the restrictions on women in her society, including the over-protective rules that her father imposes on her (he keeps her confined to the palace, for instance, which is why she secretly left the palace and posed as her handmaiden when Aladdin first meets her). She doesn’t see why she can’t also be a leader like her father. Despite this feminist subplot, however, there comes a moment in the movie when Jasmine’s desire for liberty and rebellion against autocratic rules, especially the evil tyranny of Jafar, becomes a model not just for females but also a model for any individual who would take a stand for freedom against injustice and tyranny. In fact, she explicitly urges the male leader of the palace guard to “do the right thing.” Thus, her desire to speak her mind about what’s happening becomes an appeal to individual liberty of many kinds, not just as a politically correct appeal to empower females.

All in all, ALADDIN is superlative entertainment for the whole family, a first-rate musical comedy with lots of adventure and romance. It’s one of the most enjoyable, inspiring times moviegoers will have at the movies this year.