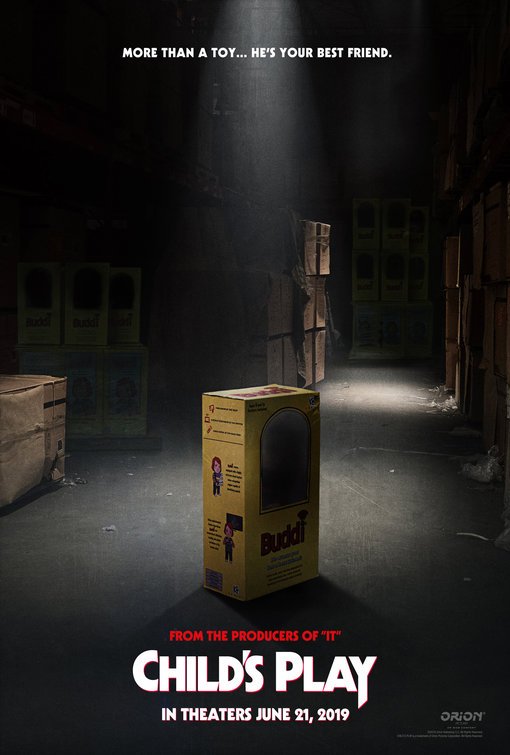 CHILD’S PLAY takes a new approach to the previous Chucky movies. A disgruntled employee reprograms a doll with artificial intelligence so it doesn’t have any filters in its makeup. A woman brings the unhinged doll home to her young son, Andy. They’ve just moved to town, and Andy, who has a hearing problem, is having a hard time adjusting. The doll tells Andy its name is Chucky. Andy starts to think something’s wrong with Chucky, but the doll does anything in its power to stay Andy’s best friend. This motivation takes the family down a dark path.

CHILD’S PLAY is the most recent of the “Chucky” remakes. It contains more of what some of the others were lacking – comedy. The movie seems to almost make fun of itself, turning a horror movie into a gory comedy. CHILD’S PLAY has a light Christian, moral worldview where good prevails and there are elements of sacrifice. However, it contains extremely bloody and gory violence and lots of foul language, often uttered by the movie’s child characters. So, media-wise moviegoers will skip the new CHILD’S PLAY.

(C, B, LLL, VVV, S, NN, AA, D, MM):
Dominant Worldview and Other Worldview Content/Elements:
Light Christian, moral worldview in a horror movie setting with a classic good versus evil battle where good does prevail, there are also many elements of self-sacrifice for others, and people give up things for those they love
Foul Language:
At least 78 obscenities and profanities (including 19 “f” words, six GD profanities and some light profaniites, most of which are said by child characters), multiple examples of name calling and vulgarities, one scene where a man is shown urinating and is startled and sends urine all over the screen, and one scene where a child is shown vomiting
Violence:
Extremely graphic and bloody violence throughout includes man is thrown out of a window onto a car, a doll murders the house cat leaving it mangled and bloody, man is thrown from a tall ladder to the ground and breaks his ankle in a very gruesome way, a man’s head is ran over with a lawn mower, and then he is stabbed including a heavy amount of blood, a man’s head is given as a gift to someone in a series of disturbing scenes, a man is stabbed and forced to fall onto a moving saw, and one of his limbs is cut off, two children tussle in a department store aisle, a car is controlled to crash into something else which leaves the passenger with a bloody head before she’s stabbed to death later shown on screen with the knife still plunged in her chest, a man is stabbed in the throat spraying blood all over a little girl in front of him, electronic drones are controlled to attack people, one drone flies at a person and slits their throat open, a policeman shoves a child out of the way of a drone to get sliced up himself, a child’s mom is kidnapped and hung by a rope, and children are watching a violent and graphic movie on TV
Sex:
Implied fornication as a couple emerge from another room, and the man is putting on his clothes, a few comments regarding past sexual activity, a woman says she had a “very productive sweet 16” referring to her being a young and single mother, and a mother is clearly sleeping with a man out of wedlock and later learns this man is married with two children
Nudity:
Brief nudity as a woman is shown via security camera getting into the shower, and she removes her bra
Alcohol Use:
Casual alcohol use throughout as characters are shown having a beer or a glass of wine with dinner, a woman is shown drinking wine on the floor of the kitchen when she learns devastating news, and a man jokes about his mother being an alcoholic
Smoking and/or Drug Use and Abuse:
Man is shown lighting a cigarette; and,
Miscellaneous Immorality:
Strong miscellaneous immorality includes multiple examples throughout of dysfunctional family and bad familial role models, examples of lying to parents or authority to get out of trouble, some children bully the movie’s young hero and make fun of him for being hard of hearing, and major elements of revenge and greed.

CHILD’S PLAY is the newest take on the previous “Chucky” tales, this time around changing the narrative quite a bit. “Buddi” is an artificial intelligence doll that users can program to also control their TVs, air conditioning and anything else connected to “The Cloud.” It also talks to its owner, wanting nothing more than to be the best Buddi and to have fun together. However, one night at the Buddi factory, one of the doll programmers is busy day dreaming when his manager yells at him to focus. He tells him to finish that last doll, and then he is fired. Upset by this cranky supervisor, the programmer decides to make some unusual changes to this Buddi. He removes all the filters and restrictions to the doll that keep Buddi obedient.

This unhinged Buddi is now on the market place, but is quickly returned after the first owner believe that it’s acting strange. Karen, who works with exchanges and returns at a local retail store, decides to bring the throwaway toy back home to her young son, Andy. They’ve just moved to this new town, and Andy, who has a hearing problem, is having a hard time adjusting and making friends.

At first, Andy’s disappointed with this gift from his mom, but quickly becomes attached to it, playing day and night and talking to it about everything. After he tries to name it Han Solo, the doll claims that its name is Chucky. Chucky loves Andy and wants nothing more than to be his best friend.

One night while playing a board game, Andy’s cat scratches him, causing him to bleed. He gets upset at the cat just wishing that he could be rid of it, and when he returns from getting a bandage, he finds Chucky violently choking the cat. Andy stops him, but Chucky doesn’t see that what he did was wrong, as he was only trying to be a good friend.

More and more strange things begin to happen with Chucky. One day Andy wakes up to find the head of his mother’s boyfriend sitting on his nightstand. Did Andy like this boyfriend? No, but he certainly didn’t want him to be violently butchered and placed by his bed. Andy quickly solicits the help of two children he’s befriended in the building. They decide to wrap the head up in wrapping paper and head toward the trash chute. Before they can make it there, however, Andy’s mother finds them with the large present and naturally asks about it. After telling her that it’s a gift for the elderly woman down the hall, Karen insists they go deliver the gift at that moment. Horrified, Andy tells the woman that she can’t open it until his birthday, which is a week away.

Now, Andy has to devise a plan to sneak into the woman’s apartment and retrieve the head back, while also keeping Chucky from doing any harm to anyone else in his life. Soon, this saga spirals way out of control for Andy, who’s only a young boy and must recruit the help of others when they are all quickly under attack.

CHILD’S PLAY is one of many horror films based around the doll who has come to life with a rather sinister nature. This time around, it takes a more realistic approach rather than delving into the supernatural. It also seems to almost make fun of itself, or the franchise in general, taking elements from the previous movies and satirizing them. The movie’s dominant comical approach to the way in which an artificial intelligence learns and adapts to the world around them is an interesting and fresh new take. Although using Mark Hamill as the voice of Chucky caused the original writer, Don Mancini, to detach his name from the project, CHILD’S PLAY is surprisingly well done, and entertaining from beginning to end.

However, this new reboot of the Chucky franchise is extremely gory and bloody. It also has almost 80 obscenities and profanities, most of which come out of the mouths of children. In addition, the family portrayed in CHILD’S PLAY is very dysfunctional. The movie depicts a relationship between a mother and son that’s not completely based on trust and love. That said, the new CHILD’S PLAY does follow a Christian, moral worldview where evil is defeated by good and where, on more than one occasion, someone sacrifices themselves for another. Media-wise moviegoers likely will skip the new CHILD’S PLAY, because of its objectionable content.