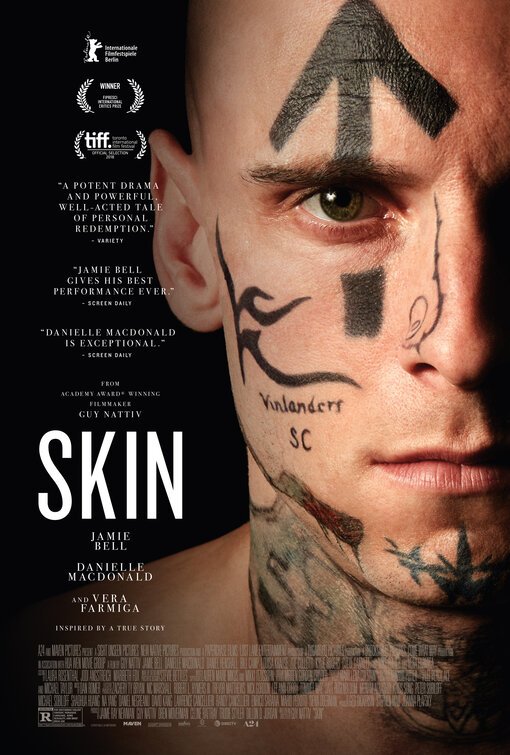 SKIN is based on the true story of a young man caught in a hateful, ultraviolent white supremacist lifestyle. It depicts the true story of Bryon Widner, who was embraced by a skinhead organization as a lost teenager and given a false sense of family by its leaders. When police capture him and try to make him talk, he decides informing is the only way out. Meanwhile, he meets a sweet but naive single mother, who shows him the love he needs. Bryon also warily befriends a black activist, who helps him move toward positive transformation.

SKIN is often difficult to watch, because it has sudden bursts of extreme violence and a near-constant flow of profanity and racial epithets. However, as Bryon risks everything to transform himself, the movie also becomes undeniably moving and uplifting. Thus, it tells a powerful portrait of the healing power of forgiveness and the capacity for change. That said, the amount of foul language, disturbing violence and sexual content in SKIN is too overwhelming to be acceptable. It could have been toned down without losing anything.

(BB, C, PaPa, AbAb, LLL, VVV, SS, NN, AA, DD, MM):
Dominant Worldview and Other Worldview Content/Elements:
Strong moral, implicitly redemptive worldview extols compassion and traditional family and depicts in the frankest, most direct terms a true story of a young man trapped within the world of a skinhead gang and shows a constant barrage of hateful actions, false love, deception, and lawlessness by the ringleaders who lure vulnerable young people into the group, but it also has a powerful portrait of the healing power of forgiveness and the capacity for change as the main character becomes attached to a single mother and her children and is mentored by a compassionate black man;
Foul Language:
At least 231 obscenities (including many “f” words), 26 strong and light profanities, one obscene gesture, and frequent racial epithets;
Violence:
Very strong and strong violence includes brutal beatings of racial minorities by white skinheads, a mosque is burned down, Latino workmen on the mosque are locked in a car and stabbed to death brutally before the car’s set on fire, white supremacists chase a black child and punch, beat and stab him, they also throw cans at young girls, fighting and hitting with blunt objects, strangling with a cord, characters are shot and killed, a man treats a woman roughly and throws her out of his room, another character treats a young boy roughly, painful tattoo-removal sequences with screaming, and a dog is killed and hung from tree;
Sex:
Two depicted scenes of fornication;
Nudity:
Partial upper female nudity in a see-through clothing situation and a skinhead pulls his pants down in front of a female investigator and, while covering his genitals, shows his buttocks from the side and behind as he reveals a tattoo saying “Snitches Get Stitches” that’s etched in the front of his legs;
Alcohol Use:
Frequent social drinking, often including drunkenness that fuels violent assaults by skinheads on others;
Smoking and/or Drug Use and Abuse:
Smoking and brief drug use; and,
Miscellaneous Immorality:
Rampant racism and hatred but ultimately rebuked, and there’s false love and deception of vulnerable young people by an older white supremacist couple.

SKIN is based on the true story of a twentysomething skinhead caught up in the violent, hateful white supremacist lifestyle, who changes when he falls for a single mother and meets an African-American activist who wants to help him escape. Dramatically powerful, SKIN has a moral, redemptive worldview by the end, but has excessive foul language, graphic violence, explicit sexual content, and extremely hateful Anti-Semitic, pagan elements when the young man is depicted as an active hatemonger.

The movie depicts the true story of Bryon Widner (Jamie Bell), who was taken in by a skinhead organization as a lost teenager and given a false sense of family by its leaders. The skinheads are overseen by a couple named Fred “Hammer” Krager (Bill Camp) and Shareen (Vera Farmiga). Fred intimidates his young charges with an iron fist, while Shareen is more insidious since she offers home-cooked meals and motherly affection to the young men and women who fall under her sway.

As the movie opens, Bryon (Jamie Bell) has been under their thumb for years and is hopelessly covered in white-supremacist tattoos that seem to ensure he’ll never have a normal job. As his band of skinheads face off in a violent confrontation with a group of black counter-demonstrators at a white supremacy march, Bryon winds up kicking and beating a teenage boy into needing a lengthy hospital stay.

Despite Bryon’s ugly macho bravado, it quickly becomes clear that he’s starting to hate what he’s become. When the police capture him in a raid and try to make him talk, he starts to see that becoming an informant is the only way out. Meanwhile, he meets a sweet but dangerously naive single mother named Julie (Danielle Macdonald). Julie shows him that love can be found beyond the distorted environment wherein he’s trapped. Also, Bryon warily befriends the local black activist Daryle (Mike Cotter) as the final step to making the life or death decision to change his ways.

SKIN is a movie that’s often difficult to watch, because it has unexpected, sudden bursts of extreme violence and a near-constant flow of profanity and racial epithets. However, as Bryon risks everything to transform his heart and his life, it’s also undeniably moving and uplifting by the end. Eventually, it tells a powerful portrait of the healing power of forgiveness and the capacity for change.

As Bryon, Jamie Bell turns in a stunning performance that uplifts the movie and gives the highly acclaimed cult classic AMERICAN HISTORY X a run for its money in depicting skinhead culture, and the danger involved in trying to escape it. Considering he played the softly emotional songwriter Bernie Taupin in the Elton John biopic ROCKETMAN just two months ago, Bell is displaying an amazing range that could earn him some awards during awards season.

Danielle Macdonald as Bryon’s girlfriend and eventual wife gives another powerhouse performer. Her character shows Bryon true love while trying to maintain victory over her own questionable and racist past. Vera Farmiga brings a truly twisted calm to her portrayal of the false mother figure Shaheen, showing that evil people often entice others into their evil web by using insidious charm.

Writer-Director Guy Nattiv has crafted a movie with a bleak cinematography that matches the hopeless circumstances in which its characters live. The sense of dread throughout the movie is impressive, but it’s made all the more incredible by the frequent moments of tenderness Nattiv gives viewers. This makes Bryon’s eventual transformation even more powerful.

The movie is rooted in a short called SKIN that won the Oscar this year for Best Live Action Short. That movie showed the life of a skinhead who finds himself subjected to horrific revenge by some African-American vigilantes. It proved controversial for having a shocking ending that seemed to use too much dark humor in depicting such a sensitive topic.

However, Nattiv has opted to tell the true story here, complete with Bryon’s full escape from the skinhead scene and transformation into a force for good in race relations. That makes this feature version of SKIN an infinitely better and more responsible movie, as well as one that deserves high praise in several areas.

All that said, the amount of foul language, disturbing violence and sexual content in SKIN is too overwhelming to be acceptable, even for adults who might be interested in a powerful story of redemption. It could have been toned down without losing anything. Also, SKIN doesn’t contain any Christian content, even though the real-life Bryon has reportedly become a Christian and joined a church with his family.

Writer: Writer-Director Guy Nattiv has crafted a movie with a bleak cinematography that matches the hopeless circumstances in which its characters live. The sense of dread throughout the movie is impressive, but it’s made all the more incredible by the frequent moments of tenderness Nattiv gives viewers. This makes Bryon’s eventual transformation even more powerful.