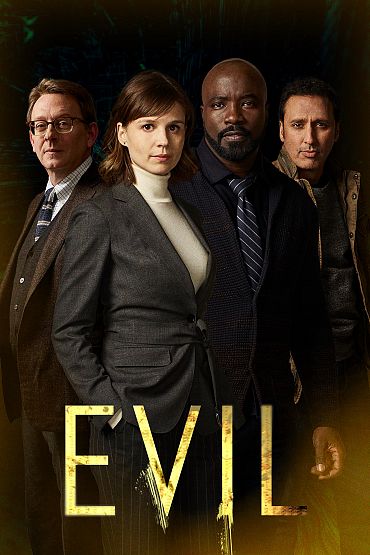 The pilot episode of EVIL, a new fall series on CBS, grapples with the demonic side of the supernatural, but the conclusion offers a bit of hope. As a priest-in-training, David Acosta, assesses the miraculous occurrences of the supernatural, as well as demonic influences and hauntings on people. He invites a pragmatic forensic psychologist, Dr. Kristin Bouchard to join him on his next mission to investigate a miracle. Though Bouchard says she doesn’t believe, she’s interested in exploring the supernatural and seeing what else may be unexplained by her scientific mind.

The pilot episode of EVIL is well-written and produced. It follows a similar, yet more violent, standard for CBS programs. The episode presents a strong Christian worldview. Christ and prayer are the only hope against the demonic forces behind the rise of evil in the world. The pilot episode positively explores the supernatural world, but extreme caution is recommended due to violence, scary elements and some sexual references. For example, a demon harasses and assaults the lead female character. Also, the pilot episode of EVIL shows some gory pictures of dead bodies.

(CCC, BBB, HH, L, VV, S, M):
Dominant Worldview and Other Worldview Content/Elements:
The strong Christian worldview of one character intentionally contrasts with the strong humanist/atheist worldview of another, a Cross is drawn on a table, the “Our Father” or Lord’s Prayer is seen as protection from the demonic, characters openly discuss the demonic, miracles, angels, and believers, and doubts about the existence of the supernatural are expressed, but the humanist/atheist character appears to be considering Christianity and the church at the end of the episode
Foul Language:
Two obscenities, one light profanity, and a character says, “I swear”
Violence:
Strong and light violence includes multiple descriptions and depictions of murder, a demon harasses and assaults a woman, a man attacks a woman, and rape is discussed
Sex:
Sexual content includes rape and necrophilia are discussed, references to one character’s sexual thoughts, and it’s implied that a demon removes the panties of a woman and kisses her C-section scar
Nudity:
No explicit nudity but there’s implied nudity during a demonic assault
Alcohol Use:
No alcohol use
Smoking and/or Drug Use and Abuse:
No smoking or illegal intoxicant drugs, but a woman takes a prescribed medication;
Miscellaneous Immorality:
A discussion of evil in the world and what drives it encourages, a dysfunctional family is portrayed as mom attempts to raise four daughters without a husband present, and doubts about the existence of the supernatural include a strong belief in science.

The new CBS series EVIL is about a female psychologist and a Catholic priest-in-training who investigate and evaluate violent criminals to see if they’re mentally fit to stand trial, with the priest believing in supernatural reasons for the criminal’s actions.

Dr. Kristin Bouchard is the pragmatic psychologist, and David Acosta is the priest-in-training who believes that demons could actually be fueling many of these crimes. In the pilot episode, Dr. Bouchard examines a man named LaRue, whom she believes is mentally ill. In their first meeting, Acosta offers Bouchard a Cross and tells her the “Our Father,” the Lord’s Prayer, will help her ward off evil. The two are initially in opposition, with Bouchard attributing her strange supernatural encounters to science, and Acosta attributing them to a supernatural battle between good and evil.