AN AMERICAN IN PARIS

"Finding Beauty and Love in Paris”" 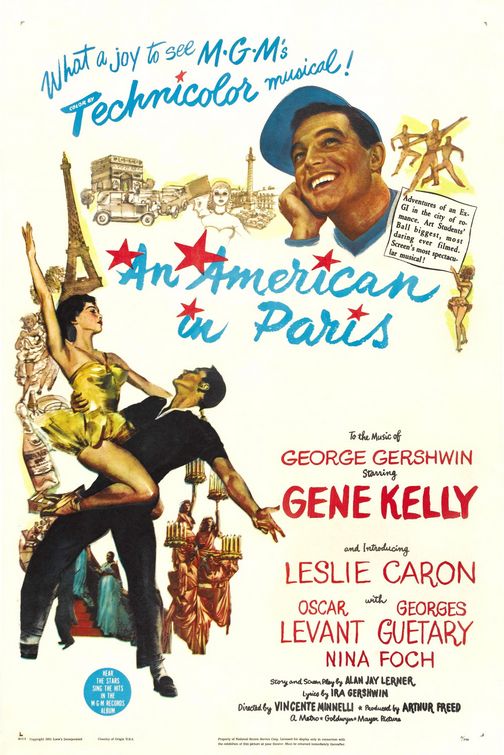 AN AMERICAN IN PARIS is a classic 1951 movie musical that captures almost every single aspect of a beautifully done musical. A World War II American veteran lives in Paris to develop his skills as an artist. Jerry lives in an apartment with a nervous American concert pianist. When a wealthy woman offers to pay for his paintings, Jerry is appreciative but wary. Complications ensue when he meets the girl of his dreams, but she happens to be engaged to Jerry’s French friend, who’s a really nice guy.

Content: (Ro, C, FR, B, N, A, D, M):
Dominant Worldview and Other Worldview Content/Elements:
Slight Romantic worldview, where characters are ruled by their emotions, and romantic love and personal artistic expression are extolled without reference to God, but one scene has a man singing about “Paradise,” though the song has an implied tone of salvation by works and human effort, some moral elements include unmarried man realizes he must tell an unmarried woman the truth that he actually loves another unmarried woman, and another man realizes he must allow the woman he loves to be with the man she really loves rather than force her to marry him despite their close relationship over the years, so he also decides to do the right thing
Foul Language:
No foul language
Violence:
None
Sex:
No sex scenes but some kissing
Nudity:
Upper male nudity, women wear tight dancing outfits, one scene backs exposed, women wear bras with skirts in one dance scene
Alcohol Use:
Alcohol use
Smoking and/or Drug Use and Abuse:
Smoking but no drugs; and,
Miscellaneous Immorality:
Many dancing scenes show men and women holding one another closely, and a woman pursues a man, but she’s genuinely interested in him.

AN AMERICAN IN PARIS is a classic 1951 musical movie from Arthur Freed’s great production team at MGM, which captures almost every single aspect of a beautifully pr oduced musical. The movie is about an American veteran who decides to live in Paris after the war to develop his skills as a painter. He lives in an apartment with a nervous American concert pianist. Both men are friends with a successful French nightclub singer. When a wealthy woman offers to pay for his paintings, this war veteran is in for the ride of a lifetime.

Jerry Mulligan (Gene Kelly) has decided to stay in Paris after World War II. He’s a starving painter who’s loved by the community but not by his wallet. One day, as Jerry goes out to paint, a wealthy woman eyes his paintings. The woman, Milo Roberts, offers to pay a large sum for his works in exchange for a possible exhibition. Jerry quickly picks up that Milo has a crush on him and may only be supporting his work because she fancies him. Meanwhile, Jerry’s friends are worried that Milo is being possessive of Jerry. So they throw him a series of parties, but not one girl interests him.

Milo invites Jerry over alone to her lavish apartment, where Jerry begins to feel uncomfortable and suggests that they go have dinner in the café downstairs. When the two are seated, Jerry spots Lisa and is in love with her at first sight. Jerry pretends to know her, and the two start a love affair after Jerry pursues her. Unknown to Jerry, Lisa is dating Henri, the professional French singer who’s friends with Jerry.

Henri proposes to Lisa after a concert one night, and Lisa accepts. She meets Jerry in their usual spot by the bridge and says she can’t see him anymore. Lisa feels a duty to Henri, because he kept her safe during the war.

Defeated and depressed, Jerry goes to Milo’s and invites her to an artist’s ball. At the ball, everyone is dressed in black and white costumes. As Jerry dances with Milo, he sees Henri and Lisa dancing. He tells Milo he is in love with Lisa and apologizes profusely. Jerry goes out to the terrace, where Lisa tells him she’s off to be married to Henri in the morning. The two say goodbye while Henri secretly watches them embrace. As Jerry ponders his love for Lisa and watches Henri drive away with Lisa, an elaborate dance number occurs showcasing Jerry’s love for her. The dance number is filled with iconic colorful scenes from famous paintings by impressionist painters such as Pierre-August Renoir and Toulouse-Latrec, to the tune of George Gershwin’s magnificent symphony, “An American in Paris.” Is this the end of Lisa and Jerry’s romance?

Overall, however, AN AMERICAN IN PARIS has a light Romantic worldview where romantic love and personal artistic expression are extolled, and God doesn’t enter the picture. The movie doesn’t approach these subjects in a didactic or immoral way that might be offensive to Bible-believing Christians. After all, the beauty that Jerry sees in Lisa and the beauty that Jerry and we see in the impressionist paintings and in Paris, ultimately is founded in God and His Creation. Also, in one of the movie’s most enjoyable and most uplifting scenes, Jerry uses dance to give the local French children in the neighborhood an entertaining English lesson. The scene shows that using your talents to teach and amuse children is a worthy endeavor. So, despite the Romantic worldview in AN AMERICAN IN PARIS, it does have some morally redeeming content that adds to the entertainment in the picture. Giving joy to others is a good thing, and this classic movie has certainly been doing that over the years!

Watch AN AMERICAN IN PARIS: