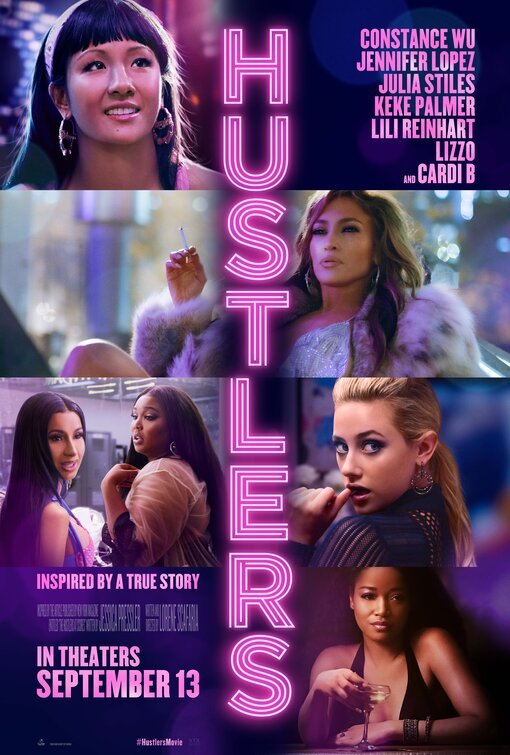 HUSTLERS is based on a true story by a New York Times journalist. It opens in a New York strip club. Destiny has started dancing, so she asks for pointers from veteran stripper, Ramona. Rich Wall Street men are among their biggest clients. When the 2008 fiscal crisis hits, they must get minimum wage jobs. After a few years, Ramona and Destiny devise a new plan. They’ll reel in wealthy men who like to party. Then, after slipping drugs into their drinks, they’ll max out their personal and corporate credit cards and split the profits. They recruit some other women, but, with a business like this, it’s only a matter of time before they’re caught.

HUSTLERS is well produced. There’s some humor and the fact that it’s based on real events is interesting, but the amount of immorality is overwhelming. Because of their success at deceiving rich men, the women’s lifestyle is practically glorified, with the characters buying expensive clothes and cars. HUSTLERS also has frequent nudity, constant substance abuse, and lots of foul language. It’s an abhorrent movie with no redeeming qualities.

(PaPaPa, Fe, Acap, LLL, V, SS, NNN, AAA, DDD, MMM):
Dominant Worldview and Other Worldview Content/Elements:
Very strong pagan worldview where the driving force of motivation is money and hedonistic self-pleasure, the main characters go to extreme measures throwing away any kind of moral values and beliefs in order to make more money, there is reliance on God or any basic morals to guide the people in the story, and the only reason why the extreme immorality stops is because of the legal authorities, plus some minor feminist elements as some of the motivation is female empowerment, and one or two brief anti-capitalism comments about rich men in business
Foul Language:
At least 118 obscenities and profanities (including many “f” words and some strong profanities), an obscene gesture, one character vomits when she’s nervous or scared and is shown throwing up multiple times throughout the movie
Violence:
Woman recalls how men in the strip club can be violent but it’s never depicted on screen, a man falls through a glass table, two women wrestle over a cell phone, a man is said to have jumped off of a balcony and hurt himself, and a woman has some of his blood on his shirt although no blood is shown on him, a surprised woman reacts and punches a man in the face
Sex:
Strong sexual content includes many comments involving self-abuse and other sexual acts, crude references to genitals, an unmarried woman finds herself pregnant, woman are said to be giving oral sex for money, a woman recalls getting paid for sexual favors after getting asked by a man many times, implied fornication
Nudity:
Upper female nudity throughout the entire movie from beginning to end, women are shown dancing very sexually either topless or in very little clothing, also shown in lingerie and scantily clad, women are shown undressing on a video tape, full rear, upper and side male nudity as a nude man jumps off a roof and has to be taken to the hospital without his clothes
Alcohol Use:
Characters rarely are shown without an alcoholic drink, many examples of drunkenness, constantly taking shots and having wine when not in a club
Smoking and/or Drug Use and Abuse:
Multiple characters smoke cigarettes throughout the movie, cocaine is used very regularly and not at all rebuked, woman does bumps of cocaine while sitting in a mall in broad daylight, women make a mix of MDMA and Ketamine in order to drug their victims, multiple people are slipped drugs into their drink and are shown passed out or barely coherent; and,
Miscellaneous Immorality:
Very strong miscellaneous immorality with many examples of dysfunctional families, a woman’s parents both left her when she was a child, a few examples of single mothers, an unmarried couple argue violently in front of their child, examples of blackmail as rich and powerful men are videotaped doing promiscuous things, major themes of greed as the characters go to extreme measures to make more money even though it’s not necessary, many examples of moral relativism as everyone in the movie (including the woman writing the article about this situation) feels that the women’s actions were justifiable because of the type of people they were drugging, stealing from and blackmailing, and examples of bad role models.