"Speed Is Good Only When Wisdom Leads the Way" 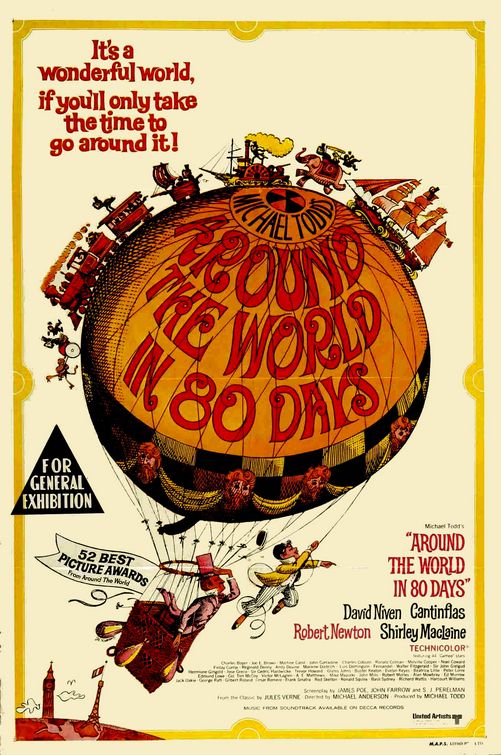 AROUND THE WORLD IN 80 DAYS is the classic 1956 movie based on the famous novel by Jules Verne. David Niven stars as Phileas Fogg, a fastidious and demanding, but resourceful, English gentleman in 1872, who bets he can travel around the world in only 80 days. With his quirky new French servant by his side, Fogg begins his travels, spending insane amounts of money to persuade people to help him. However, there’s been a robbery at the Bank of England, and a detective from Scotland Yard, who thinks Fogg is the thief, is hot on Fogg’s trail.

AROUND THE WORLD IN 80 DAYS is best viewed on a widescreen. Though overlong and leisurely paced, it’s a charming, witty, beautifully photographed comic adventure with little objectionable content. David Niven gives a dry, witty, underrated performance as the fussy English gentleman who eventually falls in love. Popular Mexican star Cantinflas provides the comic relief as the manservant. Finally, Shirley MacLaine looks beautiful as the charming Indian princess saved from a funeral pyre. Media-wise families will enjoy AROUND THE WORLD IN 80 DAYS.

(B, C, Pa, V, N, A, D, M):
Dominant Worldview and Other Worldview Content/Elements:
Light moral, Christian worldview extolling service, loyalty, marriage, and helping others, with references to a pagan sacrifice in India, which is condemned
Foul Language:
No foul language
Violence:
Light, often comic violence includes a duel on a train leads to a full-blown fight between Indians and cowboys, man with a knife threatens two other men in a western saloon whenever they talk to his woman, slapstick comedy involving a manservant who fights a bull in Spain and becomes involved with some acrobats, some stunt horse riding, etc.
Sex:
No sexual content, but comical character likes to flirt with the ladies and men mention the different types of girls in each country
Nudity:
Men are shown without shirts in one scene
Alcohol Use:
Four scenes with alcohol use
Smoking and/or Drug Use and Abuse:
Nine scenes depicting social smoking, and one scene where a detective drugs the drink of a man’s valet servant; and,
Miscellaneous Immorality:
A man plays cards and has amassed his fortune via card playing, one scene in a club, people are sacrificed to gods and are almost burned at the stake, characters 1872 make a bet that no one can travel around the world in 80 days.

AROUND THE WORLD IN 80 DAYS is the classic 1956 movie, based on the famous novel by Jules Verne. The movie follows the adventures of an English gentleman and his manservant in 1872 who embark on a journey to travel around the world in only 80 days, by ships, trains and a railroad handcar equipped with sails.

The movie begins with a brief introduction describing man’s understanding of travel down through the ages, with references to modern technology like automobiles, planes and even space travel. The movie then takes viewers back from 1956 to 1872 in the streets of London. A fastidious English gentleman, Phileas Fogg, makes a wager in his men’s club that he can travel the world in precisely 80 days. He then sets off with his new manservant Passepartout. Fogg, who’s played by David Niven, takes 20,000 pounds out of his bank account. With Passepartout by his side, he begins his travels, spending insane amounts of his money to persuade individuals to get him from point A to point B faster. However, there’s been a robbery at the Bank of England, and a detective from Scotland Yard, thinking that Fogg is the thief, is hot on Fogg’s trail.

A series of picturesque adventures follows, with multiple obstacles along the way. Many of the obstacles involve Fogg’s quirky manservant, played by the popular Mexican comedian Cantinflas. During their travels, the manservant has to fight a bull in Spain, rescue a widowed princess in India, join a circus in Japan, and fight off Indians in the Wild West.

AROUND THE WORLD IN 80 DAYS is best viewed on a widescreen television. In 1956, audiences were impressed by the movie’s 70mm color cinematography of iconic places around the world. Producer Mike Todd added a bunch of cameos of major stars in the movie, which helped ensure its success at the 1957 Oscar ceremony, where it won Best Picture. Cinema experts also cite the fact that the three previous Oscar winners were small movies like the wonderful MARTY, which starred Ernest Borgnine, as a chubby butcher in New York who unexpectedly finds romance.

AROUND THE WORLD IN 80 DAYS sometimes comes across as a leisurely travelogue. It’s also a little slow in places. Even so, David Niven’s performance as Phileas Fogg shouldn’t be discounted. Niven gives a dry, witty, underrated performance as the fussy, demanding English gentleman who eventually falls in love. Cantinflas provides most of the comic relief, however, as the manservant with a penchant for the ladies and a tendency to get into trouble. Shirley MacLaine looks beautiful as the charming Indian princess saved from a funeral pyre. Finally, British character actor Robert Newton has a wonderful turn as the suspicious Inspector Fix, Newton’s last role (Newton played the definitive Long John Silver in Disney’s 1950 version of Treasure island).

Though the story in AROUND THE WORLD IN 80 DAYS is based on a bet, the movie has a moral worldview. Despite his penchant for getting into trouble, the manservant is committed to serving his master. In one of the best scenes, the manservant helps Fogg rescue a princess in India who’s being forced to sacrifice herself on her husband’s funeral pyre. This, of course, is the Hindu practice of “sati,” where a widow sacrifices herself by sitting atop her dead husband’s funeral pyre. The practice was outlawed in 1829 after intense opposition from Christian evangelists like the great William Carey, but it’s been difficult to completely stop the practice. After they rescue the princess, she joins the men on the rest of their travels back to London.

All in all, AROUND THE WORLD IN 80 DAYS probably didn’t deserve the Best Picture Oscar for 1956, but it’s still a charming, witty and well produced, though overlong, comic adventure with little objectionable content.

Watch AROUND THE WORLD IN 80 DAYS: