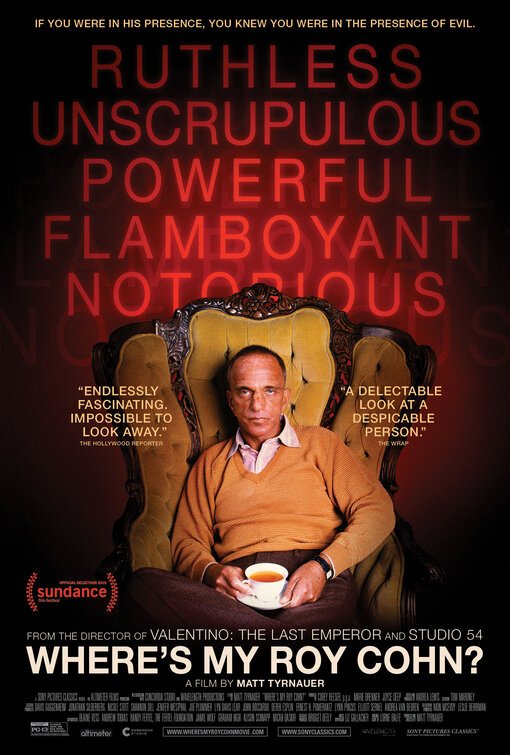 WHERE’S MY ROY COHN? is a documentary about a controversial lawyer and political figure who worked with Senator Joe McCarthy in the 1950s to expose communists in the federal government. A closeted homosexual until the day he died in 1986, Roy Cohn became an extremely successful lawyer in New York in the 1970s and 80s. His clients included mob figures, the Catholic Church and Donald Trump. Using interviews with former colleagues and one male lover, the documentary contends that Cohn used scare tactics, divisive rhetoric, deceit, and other underhanded means to win cases and defame opponents.

WHERE’S MY ROY COHN? is extremely one-sided and superficial. It leaves out many details that contradict most of the movie’s major points. For example, the evidence shows that McCarthy and Cohn were right about there being dozens, if not hundreds, of Soviet communist spies in the federal government. Also, Cohn had many more clients and friends than just mob figures, Republican politicians, homosexuals, and Donald Trump. And, he represented the Catholic Church for free. WHERE’S MY ROY COHN? is just another deceitful piece of leftist propaganda.

(RoRoRo, PCPCPC, HoHoHo, L, V, S, N, A, D, MMM):
Dominant Worldview and Other Worldview Content/Elements:
Very strong Romantic, politically correct, pro-homosexual worldview that gives a one-sided and superficial portrait of a controversial lawyer and political pundit who supported some conservative politicians and causes despite being a “closeted” homosexual himself
Foul Language:
One SOB obscenity, one “h” obscenity and one strong Jesus profanity
Violence:
A reference to a possible murder
Sex:
Multiple references to a man’s homosexuality
Nudity:
Upper male nudity in one old photo and one or two old photos of man with homosexual “drag queens” or men in drag queen outfits
Alcohol Use:
Photos of alcohol use
Smoking and/or Drug Use and Abuse:
Some smoking; and,
Miscellaneous Immorality:
One-sided propaganda, superficial propaganda, movie omits major details that would undermine its case, and movie smears people for being associated with a controversial person that the filmmakers seem to loathe for his politics.

WHERE’S MY ROY COHN? is a documentary about a controversial lawyer and political figure who worked with Senator Joe McCarthy in the 1950s to expose communists in the federal government and went on to become an extremely successful civil and criminal lawyer in New York in the 1970s and 80s, with clients ranging from mob figures to the Catholic Church to Donald Trump.

The movie gives some biographical information on the background of Roy Cohn, depicting Cohn as a legal prodigy from a Jewish family who became obsessed with getting ahead at any cost. As a young man, Cohn played a prominent role at age 24 in the conviction and execution of Julius and Ethel Rosenberg, two Russian spies who stole atomic secrets for the Soviet Union. Three years later, he became the chief lawyer for Senator Joe McCarthy in McCarthy’s crusade in his Senate subcommittee against Soviet communist agents in the federal government. This crusade and Cohn suffered a setback when McCarthy and Cohn turned their sights on the United States Army. The U.S. Army, bolstered by the media, fought back, and McCarthy and Cohn ended up being publicly disgraced.

McCarthy didn’t escape these attacks and died a broken man, but Cohn went back to New York City and started a lucrative career as a legal advisor and defense lawyer in criminal and civil cases. The documentary details Cohn’s combative, intense nature as a lawyer and discusses his controversial social life, which included frequent nights on the town in clubs frequented by homosexual men. Though Cohn never publicly acknowledged being a homosexual, the documentary interviews one of his alleged lovers and shows photos of him with apparent homosexuals at clubs like Studio 54.

Using interviews with former colleagues, the movie also condemns Cohn’s style as an aggressive lawyer who defended his clients and himself by always attacking and allegedly lying and manipulating the media, among other things. The movie claims Cohn taught his aggressive style to Donald Trump while defending Trump’s real estate company when it was accused of racial discrimination in 1973. The movie notes that Cohn represented several mafia figures charged with various crimes as well as the Catholic archdiocese. It makes a big deal about Cohn’s connection to those mafia figures. Cohn was also a strong supporter of Republican presidents like Richard Nixon and Ronald Reagan, the movie reports. Finally, the movie notes that Cohn eventually was disbarred by the New York Supreme Court just before he died of an AIDS-related illness in 1986.

MOVIEGUIDE® certainly isn’t in the business of defending everything Roy Cohn said and did. However, documentary filmmaker Matt Turnauer’s movie is extremely one-sided and superficial, if not deceitful. WHERE’S MY ROY COHN? leaves out many details that seem to contradict most of the movie’s major points.

For example, the movie fails to note that research has revealed that Senator McCarthy was on the right track when he claimed there were at least 57 communist spies from Russia working in the United States government. In fact, as author/historian Ann Coulter notes in her book TREASON, declassified decrypted cables from the Soviet Union “revealed well over three hundred Soviet spies working for the government in the forties and fifties” (Ann Coulter, TREASON [New York: Three Rivers Press/Random House, 2003], page 104). The movie also fails to mention the lie that Democrat Senator Millard Tydings from Maryland used against McCarthy when Tydings said he had a recording of McCarthy that showed McCarthy had lied when he said he had a list of 57 Soviet spies working in the federal government. The fact was that there was no such recording (M. Stanton Evans, BLACKLISTED BY HISTORY: The Untold Story of Senator Joe McCarthy and His Fight Against America’s Enemies [New York: Three Rivers Press/Random House, 2003], pages 243-245). In fact, Tydings’ claim was just one of the many lies that McCarthy’s opponents leveled against McCarthy, Cohn and the people who worked with them to expose the communist menace.

In discussing Cohn’s secret homosexual lifestyle, the movie makes a lot of Cohn’s friendship with a volunteer on McCarthy’s subcommittee, a young unmarried man from a wealthy family named G. David Schine. In Spring 1953, Cohn and Schine worked together on the subcommittee’s investigation of alleged pro-communist books carried by U.S. Information Centers overseas. Cohn and Schine made an April tour of these centers in Europe in April 1953. It struck the members of the subcommittee as odd that these centers contained pro-communist materials when they were meant to provide people overseas with anti-communist books and pamphlets. Contrary to the movie’s innuendoes about Cohn’s relationship with Schine, though it may be true that Cohn was romantically attracted to Schine, the evidence suggests their relationship was just platonic.

An article by one of Cohn’s cousins says Cohn often showed up at family functions with young men (David Lloyd Marcus, “Roy Cohn’s Last Days,” Vanity Fair, August 1987, http://www.maryellenmark.com/text/magazines/vanity%20fair/925E-000-007.html). However, an article by Ken Auletta in Esquire Magazine from December 1978, which includes a lengthy interview with Cohn, shows that Cohn attended many functions, parties and events, including New York City nightspots, with a wide variety of different people (Ken Auletta, “Don’t Mess with Roy Cohn,” Esquire Magazine, December 1978 [07/13/16], https://www.esquire.com/news-politics/a46616/dont-mess-with-roy-cohn/). Auletta’s article also shows that, while Cohn tended to support Republican politicians like Nixon and conservative causes, he also worked for Democrat politicians and even helped raise money for Democrats in New York. Thus, Cohn had a lot more clients and friends than just Republicans, mafia figures and homosexuals. Auletta’s article also notes that Cohn worked for free for the Catholic archdiocese and often volunteered for charitable causes, details that WHERE’S MY ROY COHN? conveniently leaves out. In light of all this, it’s interesting to note that the man credited with bringing down McCarthy and Cohn in 1954, Joseph Welch, the chief lawyer defending for the U.S. Army against charges of Soviet infiltration, when questioning Cohn about Schine after Schine was suspiciously and suddenly drafted by the Army, made a smarmy reference to the rumors about Cohn’s homosexuality. Of course, WHERE’S MY ROY COHN? only briefly mentions this incident. Also, it doesn’t mention the fact that Schine married in 1957, had six children with his wife and was married with his wife until they both died in 1996.

WHERE’S MY ROY COHN? spends a lot of time characterizing Roy Cohn as a tenacious but shady lawyer who would do almost anything for his clients. Well, duh! Isn’t a lawyer supposed to represent his client in the strongest ways possible? As Ken Auletta’s 1978 article in Esquire also makes clear, as a lawyer Cohn was tenacious in representing his client’s interests. According to an unnamed source in Auletta’s article, Cohn “does what he has to, to win.” Thus, rather than sit back and be passive, Cohn was always on the attack. Also, he often used publicity about his legal prowess to attract more clients, and he attracted many, many clients. This is not to say that Cohn never stepped over the line. He sometimes and probably often did. As Auletta notes, “In the Sixties, he was indicted four times (the first case ended in a mistrial) and always acquitted.” Auletta adds, “He has suffered several judicial reprimands for unethical conduct, had his wrists slapped in civil cases, and been ordered to make restitution.” However, in the end, they were only able to disbar Cohn when he was on his deathbed in 1986, when he really couldn’t defend himself.

Ultimately, therefore, WHERE’S MY ROY COHN? is just another piece of leftist propaganda. The director is not really interested in presenting a fair and balanced picture of Roy Cohn. In fact, the movie seems to be just another way to smear President Donald Trump because Trump was once a client of Cohn and because Trump’s aggressive style of campaigning and promoting his achievements as president reminds the director of Cohn’s aggressive style as a lawyer and as a smart, clever and unique legal and political pundit. Thus, the movie director claims Trump uses “scare tactics” and “divisive rhetoric” just like Roy Cohn. Perhaps, however, what leftists like the director of WHERE’S MY ROY COHN? are really upset about is that Cohn and Trump just know how to fight back and, more often than not, win.

For a better understanding of Roy Cohn and the McCarthy era, MOVIEGUIDE® recommends Ken Auletta’s 1978 article in Esquire cited above as well as the books TREASON by Ann Coulter and BLACKLISTED BY HISTORY by M. Stanton Evans.