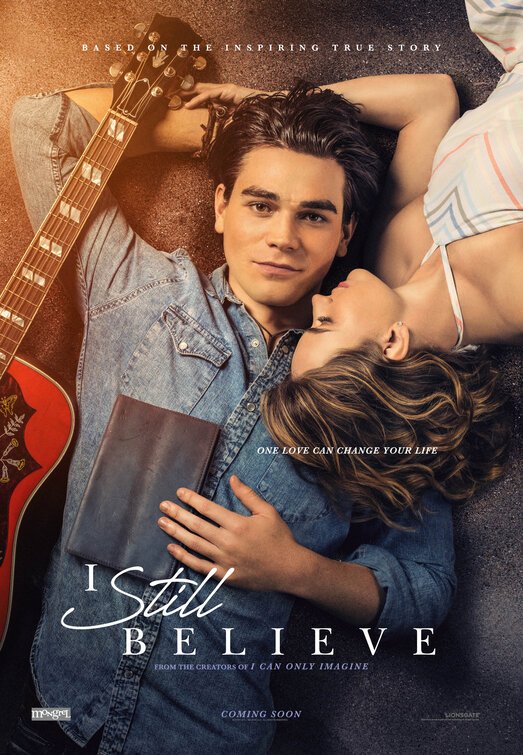 I STILL BELIEVE is the poignant true story of the famous Christian singer Jeremy Camp’s marriage to Melissa. Jeremy leaves his home to go to college in California, where his music idol, Jean-Luc, went. At a concert, he meets Jean-Luc, tells him how much he adores his music and asks him for help with his career. Jean-Luc gives Jeremy a job to hand him his second guitar during the performance. During a concert, Jeremy falls for a young student named Melissa. As the story progresses, Jean-Luc helps Jeremy with his career, and Melissa falls in love with Jeremy. When Jeremy goes home for Christmas, he finds out Melissa is in hospital for stage 3 cancer.

I STILL BELIEVE is a beautiful movie. It’s very well edited and captivating, although it even violates some rules of filmmaking. Melissa’s struggling with cancer is extremely painful. Jeremy’s commitment shows an incredible manifestation of Christian sacrificial love. The music is great, especially the last end credit song to Jesus. MOVIEGUIDE® advises caution for younger children for I STILL BELIEVE because of the heartrending scenes of Melissa’s cancer.

(CCC, V, M):
Dominant Worldview and Other Worldview Content/Elements:
Very strong Christian worldview showing that love never fails and that belief sustains love forever
Foul Language:
No foul language
Violence:
Woman dying of cancer includes hospital scenes, coughing up blood and other painful moments
Sex:
No sex scenes or sexual immorality, just some kissing between couple when engaged and when married
Nudity:
No nudity
Alcohol Use:
No alcohol use
Smoking and/or Drug Use and Abuse:
No smoking but medical drugs administered, including pain medication; and,
Miscellaneous Immorality:
Prayers apparently not answered, lead character gets angry at God, lead character who’s a singer being helped by a famous singer falls in love with the singer’s girlfriend who falls in love with him.

The movie opens with young Jeremy Camp saying goodbye to his younger, Downs Syndrome brother who idolizes him, his other younger brother and his parents, to go across the country to a Christian college in California. Jeremy picked this college because a famous young Gospel musician went there and still lives in the neighborhood. His father, a pastor, gives Jeremy a new guitar, which the family can barely afford, and says, “For me, music is a hobby, but for you, it is a gift.”

While checking into the college, Jeremy sees a flyer for a concert by Jean-Luc. He talks his way backstage in a way that could be interpreted as a small lie. He meets Jean-Luc, tells him how much he adores his music and asks him for help with his music career. Jean-Luc immediately gives him a job to hand him his second guitar during the performance. Standing in the wings, Jeremy looks at the audience and instantly falls in love with a beautiful young student named Melissa. She notices him, but the problem is that she’s Jean-Luc’s girlfriend. Melissa invites Jeremy to a Christian beach party, and Jean-Luc, who’s there, asks Jeremy to sing. Jeremy is very, very good.

As the story progresses, Jean-Luc helps Jeremy with his career, and Melissa falls in love with Jeremy. When Jean-Luc finds out, he’s furious.

When Jeremy goes home for Christmas, he finds out Melissa is in hospital for stage three cancer. He immediately drives back to California. He prays and says to God, if she loves him, he will marry her. His father tells him not to do it.

Jeremy marries Melissa, and, at the concerts, he asks people to pray for Melissa. He gets a flood of prayer letters. A one point, the doctor says she’s cancer free, but that’s not the end of the story. When Jeremy asks his father about all the unanswered prayers, he gives Jeremy a brilliant talk that God’s ways are not our ways.

I STILL BELIEVE is a beautiful movie. It’s very well edited and captivating, although it violates, without diminishing the movie in any way, some of the rules of filmmaking.

Melissa struggling with cancer throughout the movie is extremely painful. Jeremy’s commitment shows an incredible manifestation of Christian sacrificial love. The music is great, especially the end credit song to Jesus.

The movie is not for younger children, because of the heartrending progress of Melissa’s cancer, which culminates in her coughing up blood and some very painful moments.

I STILL BELIEVE will not be everybody’s cup of tea, but those who see it will grow in faith and love. MOVIEGUIDE® encourages your support.