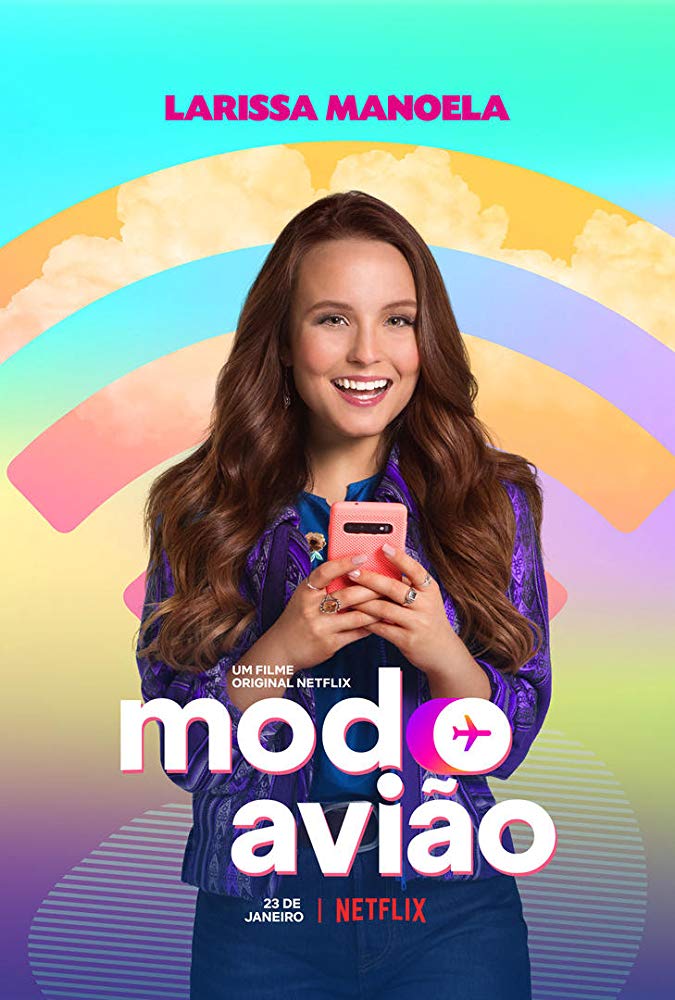 Set in Brazil, AIRPLANE MODE follows a social media influencer named Ana who’s absorbed in that world and addicted to her smart phone. After getting in a bad car accident from being on her phone, the court sends Ana to live with her grandfather in a rural area with no reception. Although her new lifestyle is drastically different, Ana learns there’s more to life than social media. As a result, she reconnects with her family and friends.

AIRPLANE MODE is entertaining and has a fun cast. The story is captivating. By the end of the movie, viewers will be completely invested in the characters’ lives. AIRPLANE MODE has a strong moral worldview, with some Christian, redemptive elements. It extols friendship, family, respect, and the importance of honesty. At one point, a character says, “The truth always wins.” However, AIRPLANE MODE contains some slapstick violence as well as some lying and stealing. Also, it’s implied that one boy is homosexual because he paints his fingernails and wears makeup. Due to these elements and one strong profanity, MOVIEGUIDE® advises caution for older children.

(BB, C, Ho, L, V, M):
Dominant Worldview and Other Worldview Content/Elements:
Strong moral worldview, with light redemptive elements, promotes the importance of family, reconciliation, honesty, truth, and respect, the female teenage protagonist obsessed with her smart phone is forced to take a break and reconnects to her grandpa, and a character says “the truth always wins,” plus it’s implied one male character is homosexual because he paints his fingernails and wears makeup
Foul Language:
One JC profanity, but no obscenities
Violence:
Two characters fight over a phone
Sex:
No sexual immorality but characters kiss and hold hands
Nudity:
No nudity
Alcohol Use:
No alcohol use
Smoking and/or Drug Use and Abuse:
No smoking or drug use; and,
Miscellaneous Immorality:
Lying and stealing.

AIRPLANE MODE is a heartwarming comedy about an influencer named Ana who is engulfed in the social media world and is forced to take a break from the lifestyle. AIRPLANE MODE is very entertaining and comedic. The movie has a strong moral worldview and some Christian moral elements that promote family and honesty. However, AIRPLANE MODE contains some slapstick violence and merits caution for young children.

Set in Brazil, AIRPLANE MODE opens as Ana, an influencer has amassed a large following on social media and works for a fashion brand. Ana has developed an addiction to her phone and is disconnected from those around her. Following some minor car accidents, Ana gets into a serious accident because she was on her phone and ends up in the hospital.

After the accident, Ana is instructed by a court official she can no longer use her phone and must live in a rural area with little internet connection. Ana is sent to live with her grandfather who lives in the mountains and is a car mechanic. When she arrives, Ana gets into a fight with a young girl over her phone, and the brother John intervenes. John and his sisters drop Ana off at her grandfather’s house, where she will meet him for the first time.

At first, Ana finds her grandfather to be cold and distant and figures that’s the reason that her father and grandfather no longer communicate. Ana’s grandfather asks if she will assist him with the cars, and Ana does. To her surprise, she is very helpful and starts to form a bond with her grandfather. Meanwhile, he shows her the room where her grandmother used to sew. Ana starts to follow her real passion, which is designing clothes.

As Ana starts to develop into a better person, she forms strong relationships with her grandfather and John, and even helps mend the relationship between her father and grandfather. Just as Ana starts to turn away from the unhealthy social media lifestyle, the fashion brand she works with tracks her down and demands she return to the city with them. Will Ana return to her old ways or continue with her new life journey?

AIRPLANE MODE is entertaining and has a great cast that includes Larissa Manoela, Erasmo Carlos and Andre Luiz Frambach. The storyline is captivating and allows the viewer to be invested in the characters’ lives. The movie does a great job displaying the character arc of Ana as she transforms into an amazing young woman.

AIRPLANE MODE has a strong moral worldview, with some Christian, redemptive elements, that extols friendship, family, respect, and the importance of honesty. For example, a character says, “The truth always wins,” and the lead character’s father and grandfather reconcile after years of not talking to one another. However, AIRPLANE MODE contains some slapstick violence as well as some lying and stealing. Also, it’s implied that one boy is homosexual because he paints his fingernails and wears makeup. Due to these elements and one strong profanity, MOVIEGUIDE® advises caution for older children.