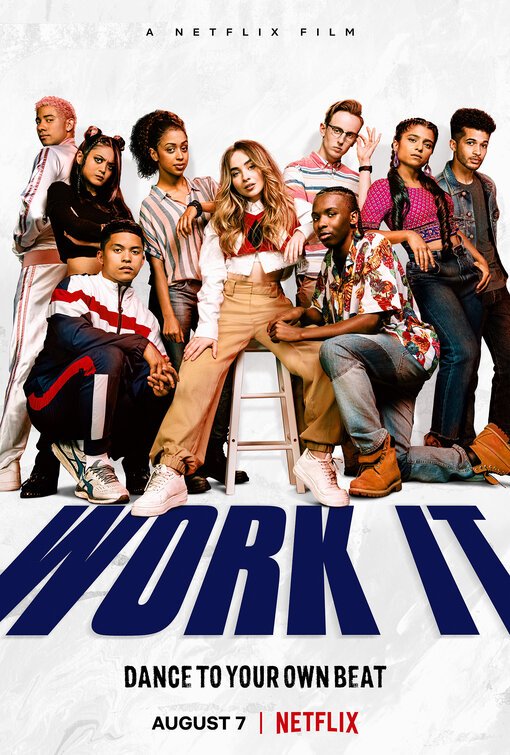 WORK IT is a movie streaming on Netflix about a teenager who wants to attend her father’s college alma mater. Quinn wants to go to Duke University, but the admissions counselor tells her she must stand apart, so she decides to enter a high school dance competition called “Work It.” Quinn tries out for her high school’s dance team, but they reject her. However, Quinn’s best friend, Jazz, agrees to quit the dance team and create a new team with Quinn. They enlist a ragtag group of dancers that have natural talent, except for Quinn. Can they qualify for the competition?

WORK IT is a well-written, entertaining movie with good music, very enjoyable dancing, and plenty of jeopardy and laughs. Even better, WORK IT has a strong moral worldview about staying committed to something you start and being a loyal friend. MOVIEGUIDE® advises caution for older children due to some pagan content, foul language and one homosexual character who’s seen as the villain. On the other hand, WORK IT has positive themes for teenagers about commitment and supporting your friends.

(BB, Ho, H, Pa, FR, LL, V, S, N):
Dominant Worldview and Other Worldview Content/Elements:
Strong moral worldview about committing to things, helping friends out, being a loyal friend, mentions of the Rapture, a homosexual character is the villain, and a character prays, but it plays like a joke because she throws a crazy reference to Beyoncé into the prayer, plus one character reads the humanist author Nietzsche, and there’s a New Age use of sage, but it’s played as a joke
Foul Language:
17 obscenities, five light profanities, one strong profanity
Violence:
An elderly man dies and is seen being taken out of a nursing home
Sex:
Sexual content includes a joke about a young man’s private parts, a teenager gets an erection while dancing, a homosexual character is the villain, a girl admires a boy’s abs, and there’s kissing
Nudity:
Upper male nudity Alcohol: No alcohol use
Smoking and/or Drug Use and Abuse:
No smoking or drugs; and,
Miscellaneous Immorality:
Nothing else objectionable.

WORK IT is a television move streaming on Netflix about a teenage girl who wants to attend Duke University, her father’s alma mater, but the college advisor tells her she must stand apart, so she decides to enter a big high school dance competition. Enjoyable and written well, WORK IT has a strong moral worldview with characters learning the value of commitment and supporting others, but the movie has some foul language and other minor issues requiring caution for older children.

Quinn has always wanted to go to her father’s alma mater, Duke University. Since Quinn’s father has passed away, she wants to serve his legacy and be reminded of him by going to Duke. When she goes for her first interview, the admissions counselor tells her she needs another extra-curricular activity if she wants to stand out. In fact, the admissions counselor loves dance and will be at a big high school dance competition called “Work It.” Quinn tells the counselor she’s a contributor to the dance team, because she works the sound board.

Now, Quinn feels she needs to join the dance team, but she really isn’t a natural talent in dancing. So, when she tells her best friend, Jazz, who’s great at dance, that she wants to join the team, Jazz doesn’t believe it will happen. Jazz says she will help Quinn learn dance, but when Quinn goes for the tryouts, she does a horrible job and doesn’t get picked. Quinn persuades Jazz to quit the team so they can start a new team.

With Quinn’s organizational skills, Jazz’s dance skills and inviting some outsiders who love to dance for fun, they decide to form a team. The other strong point they wish to recruit, is a great choreographer, and Quinn’s found the best one, Jake Taylor. When Quinn goes to talk to Jake, he says he doesn’t want to do it, because he recently had a major injury. However, it’s clear that Jack and Quinn have some chemistry together, so Quinn decides to sign up for his beginning dance class, to try to convince Jack to take on the challenge.

Will Quinn and Jazz be able to create a competitive dance team that can qualify for the big competition? Will Quinn get into Duke, her dream school?

WORK IT is a well-produced, entertaining movie streaming on Netflix. The movie has very enjoyable music and dancing. Also, it’s well-written and well-edited, with plenty of jeopardy and laughs. The cast does a good job and is enjoyable to watch.

Even better, WORK IT has a strong moral worldview about staying committed to something you start and being a loyal friend. The movie shows one character praying, but it’s not entirely to the One Ture God. MOVIEGUIDE® advises caution for older children due to that, some foul language and one homosexual character who’s seen as the villain. Overall, however, WORK IT is an entertaining Netflix choice with positive themes for teenagers about commitment and supporting your friends.