THE DEVIL ALL THE TIME

"Sinning All the Time" 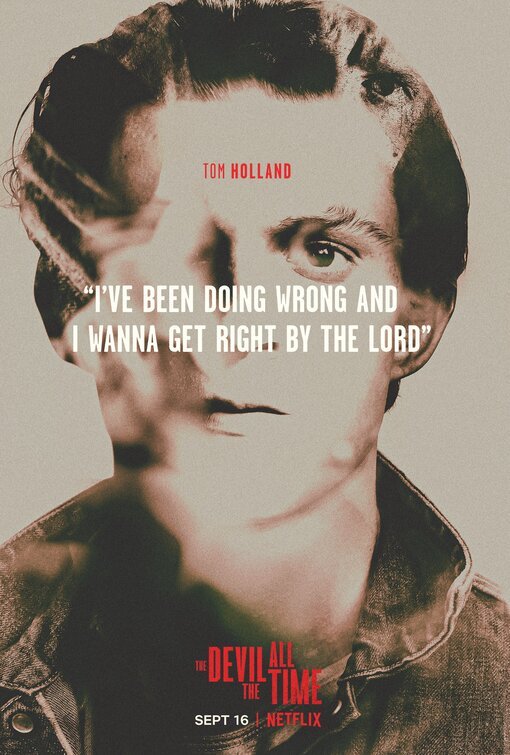 THE DEVIL ALL THE TIME is a television movie on Netflix set in the late 1940s and 50s in Appalachia in the United States. It begins with a young man named Willard Russell, who’s just returned from World War II to his West Virginia hometown, but then moves to Ohio. Things start going downhill when Willard’s wife dies of cancer, and he dies shortly afterwards, leaving his son, Arvin, an orphan. Arvin’s grandmother takes care of him and Lenora, another young orphan, but the pair must not to follow the ways of their dead parents.

THE DEVIL ALL THE TIME has a mixed pagan worldview with Anti-Christian elements. Characters act on their own fleshly desires and don’t think their actions have consequences. For instance, a pastor takes advantage of a teenager sexually. Also, another pastor murders his wife because he thinks God told him to kill her so he can resurrect her. There’s some Christian imagery and morality, but it’s plagued by sin and corrupt Christians. THE DEVIL ALL THE TIME also contains extreme violence, lots of foul language and other immorality.

(PaPaPa, AbAb, CC, B, LLL, VVV, SS, NNN, A, D, MM):
Dominant Worldview and Other Worldview Content/Elements:
Mixed pagan worldview with Anti-Christian elements where characters act on their own fleshly desires and don’t think their actions have consequences, a priest takes advantage of a teenager sexually, another priest murders his wife because he assumes God told him to kill her, and she will be resurrected from the dead, plus some Christian imagery with depictions of prayer and the value of going to one’s local church is stressed and some moral community, but it’s plagued by sin and corrupt Christians, and some moral elements where a Grandmother takes care of her grandson, people look after their loved ones, and marriage is commended
Foul Language:
At least 54 obscenities (including some “f” words), 14 profanities including some GDs and JCs, and depicted vomiting
Violence:
Extreme violence includes soldier is depicted hanging on a cross with blood all over his body, until a friend puts him out of his misery and shoots him in the head, and blood is seen spewing out of him, husband murders his wife by stabbing her jugular with a screwdriver, man shoots off another man’s genitals in rage before killing him, multiple shooting scenes where characters die, and blood is shown, father hits his son on the back of the head in order to get him to do what he wants, mention of suicide, then later there’s a depicted suicide by hanging, irate male character kills two men with his bare hands in front of his son by hitting one with a rod and suffocating another, fight scene in a bar, pastor tells a teenager he slept with that she should get an abortion
Sex:
Corrupt pastor entices teenager girls to fornicate with him, implied fornication, implied sexual stimulation, and creepy married couple takes pornographic photos with strangers they meet
Nudity:
Full male nudity, woman’s breasts shown, and upper male nudity in a few scenes
Alcohol Use:
Scenes in a bar, character has alcohol while driving, but in the time period it wasn’t outlawed
Smoking and/or Drug Use and Abuse:
Smoking in several scenes, but it’s indicative of the time period of the movie, woman has medication in bed while dying of cancer; and,
Miscellaneous Immorality:
Infidelity, corrupt police officer portrayal, dysfunctional families, lying, and manipulation.

Set in the late 1940s and 50s, THE DEVIL ALL THE TIME is a television movie on Netflix that follows interweaving stories about people of the Appalachian region in the United States. THE DEVIL ALL THE TIME contains references to church, God and prayer, but has a mixed pagan worldview with Anti-Christian elements, extreme violence, lots of foul language, and other immoral content.

The movie begins with a young man named Willard Russell, who’s just returned from the World War II to his hometown in Coal Creek, WV but then moves to Knockemstiff, Ohio. Willard is haunted by an image of a comrade who was literally crucified in Korea and in agony until Willard put him out of his misery. Willard’s mother was diligent about raising Willard in the church, but he left his Christian roots and now is reconnecting with the faith of his youth. There’s a cross in a clearing behind his home, and he prays fervently.

Willard eventually marries a diner waitress, and the pair have a son, Arvin. Willard is a family man on the outside, but on the inside, he’s filled with rage and obviously dealing with the horrors from his time overseas. When some hunters in the forest make a comment about his wife’s body, Willard waits for the right moment, then finds them and kills them. The thing is, Arvin sees the whole debacle, and it leaves an indelible mark on him. Soon thereafter, Willard’s wife gets cancer and dies when Arvin is only 7-years-old. Willard dies after his wife too, when Arvin is young, leaving the boy an orphan.

Meanwhile, a local town girl named Helen falls head over heels for a charismatic pastor named Roy. Roy and Helen get married and have a daughter of their own, Lenora. When Lenora was just a baby, Roy and Helen and Roy’s pal, Theo, go out to the woods and unexpectedly, Roy stabs Helen in the neck with a screwdriver. She dies, but Roy has lost his mind and believes he can resurrect her because God gave him a vision to do just that. When it doesn’t come to pass, he’s horrified and hits the road to move onto greener pastures.

However, while hitching a ride from a married couple, Carl and Sandy, Roy meets his demise. Carl and Lenora are an odd sort and pick up hitchhikers whenever they can so they can then force the hitchhikers to take nudes with Sandy while Carl’s behind the camera. Yet, this Bonnie and Clyde duo has their work cut out for them considering Sandy’s brother is the town sheriff.

Years later, Arvin and Lenora are in their teens. They live with Arvin’s grandmother, who’s raised them in church. Arvin has a chip on his shoulder and looks for ways to get out his rage on the school bullies who pick on Lenora. Lenora on the other hand is grateful for Arvin’s protection and friendship and is a devout Christian. She enjoys church and paying her respects to her mother’s grave outside the church. However, like her mother, Lenora becomes infatuated with the pastor in town, a young man not more than 30, who’s married.

Can Arvin and Lenora escape the legacy of their dead parents?

THE DEVIL ALL THE TIME has a great cast. Both Robert Pattinson and Tom Holland, who are British actors, tackle their character accents with ease. However, the narrator, who also wrote the novel upon which the movie’s based, detracts from the images on screen. His commentary fills what the audience should be piecing together themselves and assumes that the audiences needs all they help they can get with the plot. It would’ve been a totally different experience without the narrator, and probably for the better. To the movie’s credit, it tries to be clear with the timeline by stating the year and location of the events, but the plot’s still a little too jumpy to follow with ease.

THE DEVIL ALL THE TIME has a mixed pagan with Anti-Christian elements. Characters act on their own fleshly desires and don’t think their actions have consequences. For instance, a pastor takes advantage of a teenager sexually, and another pastor murders his wife because he assumes God told him to kill her, and God will give him the power to resurrect her. There’s some Christian imagery and morality where a grandmother takes care of her grandson, people look after their loved ones, marriage is extolled, and a teenager enjoys church. However, this positive content is plagued by sin and corrupt Christians. THE DEVIL ALL THE TIME also contains extreme violence, lots of foul language and other immorality. MOVIEGUIDE® finds the negative content excessively immoral.