"Zombie Movie with a Modern Twist" 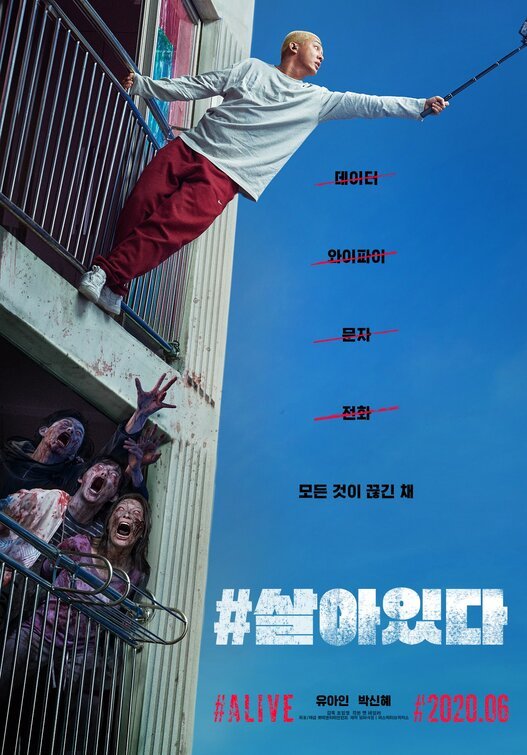 #ALIVE [“Hashtag Alive”] is a Korean zombie movie on Netflix. It takes place in an apartment complex, where a young man named Joon-woo wakes to a zombie outbreak. He locks himself inside his room, believing he’s the last one alive and struggles to decide how to survive. When he runs out of food, he starts drinking alcohol. He hears a voicemail from his family where they are getting attacked, so he starts getting drunk and hallucinating. He’s ready to commit suicide when a mysterious laser from another person in another room interrupts him. As they begin to communicate, Joon-woo wonders if there’s a chance of escape.

#ALIVE is a somewhat cliche zombie movie with a claustrophobic setting and a predictable plot, but it uses modern technology like drones and social media to keep things exciting. The movie stresses the need for human connection to survive. It also extols sacrifice. However, most of its relationships are shallow and include depressing humanist elements making suicide seem like the best option. Because of these elements, excessive violence and strong foul language, MOVIEGUIDE® advises extreme caution.

(B, C, HH, LL, VVV, AA, DD):
Dominant Worldview and Other Worldview Content/Elements:
Light moral, redemptive worldview with some good values such as human connection and sacrifice, but marred by strong humanist elements where multiple characters attempt suicide, but they’re unsuccessful
Foul Language:
21 obscenities (16 “f” words) and no profanities
Violence:
Graphic violence includes countless people turn into cannibalistic zombies, when people turn into zombies there are loud cracking bone sounds and they bleed from their eyes, as a zombie, they try to eat other humans to infect them as well, horrific makeup showing zombie transformation is seen throughout the movie, bloody effects of being bitten and falling down off buildings, several zombies are shot in the head and body with blood splattering, humans fight to stay alive with golf clubs and ice picks and other household weapons, depiction of attempted suicide, but the person is stopped, another implied unsuccessful suicide attempt, a character plays a violent zombie video game in one scene
Sex:
No sex
Nudity:
No nudity
Alcohol Use:
When the protagonist becomes depressed he drinks a lot of alcohol, gets drunk and hallucinates, and a pile of alcohol bottles are used to fend off flesh-eating zombies
Smoking and/or Drug Use and Abuse:
One character smokes a cigarette, plus characters get drugged against their will; and,
Miscellaneous Immorality:
Nothing else objectionable.

#ALIVE is a Korean zombie infection movie on Netflix that takes place in an apartment complex where a young man wakes up to a zombie outbreak and tries to survive by various means.

Joon-Woo is a college-age young man who streams video games and posts YouTube videos for a living. He wakes up one day to people screaming and running outside. One of his friends texts him to tell him to check the news, and the reporter announces a city-wide zombie outbreak, advising residents to stay inside. When Joon-woo looks out the window, chaos quickly ensues, confirming the news report.

Startled, Joon-woo hears a knock at the door, and his neighbor suddenly bursts into his apartment. As the news report explains some of the early symptoms of the “transformation,” Joon-woo’s neighbor pleads to stay, saying his brother has been infected. Just as the neighbor turns into a zombie, Joon-woo is able to push him outside and shut the door. He hears on the news that rescue teams will be sent out but to prepare to have food for up to sixty days.

After rationing out the best he can, Joon-Woo checks outside once again and sees that everyone appears to have been infected. The news report says that some of the zombies retain their basic functions and can open doors. One of the zombies bursts knocks over the refrigerator Joon-woo used to block the entrance. The zombie destroys most of his food in the process, but Joon-woo outsmarts the zombie, and it tumbles off the balcony.

With his food depleted, Joon-woo turns to alcohol for his last bit of nourishment. He decides to use the technology around him to try and contact the outside world. He posts on social media his location and then flies a drone outside with his phone taped to it to get reception. He gets reception but only for a few moments.

Losing hope, Joon-Woo suddenly receives a voicemail on his phone. He hangs off the balcony in order to get phone service to listen to the message. It’s his family leaving the message, but he hears them get attacked and loses hope. After getting drunk and hallucinating that his family returns home, he decides the only way out is to hang himself.

He says goodbye to his online following and begins to commit suicide. However, a laser pointer from another apartment room interrupts his attempt. Pointing to things around Joon-woo’s room, the person communicates with him, and he decides against suicide. With this newfound ally, Joon-woo begins to have hope but must choose carefully his next steps for survival.

#ALIVE is a somewhat cliche zombie movie, with a claustrophobic setting and a predictable plot, but it uses modern technology like drones and social media to keep things exciting. The movie stresses the need for human connection to survive. It also extols sacrifice. However, most of its relationships are shallow and include depressing humanist elements making suicide seem like the best option. Because of these elements, excessive violence and strong foul language, MOVIEGUIDE® advises extreme caution.