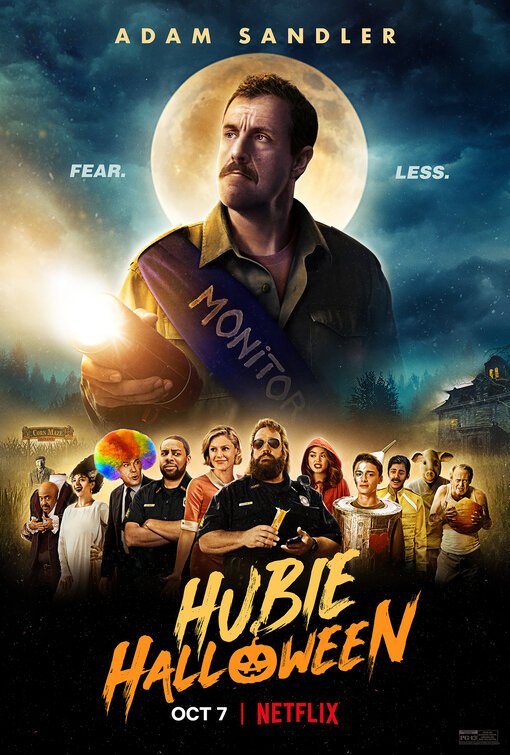 HUBIE HALLOWEEN is a horror comedy on Netflix starring Adam Sandler. Sandler plays Hubie, a nerdy man with a speech impediment. Hubie loves Halloween, but he’s easily scared. Hubie is the town’s punching bag. People are always making fun of him for no reason. Hubie is passionate about keeping the townspeople safe, especially on Halloween night. When a series of disappearances takes place on Halloween night, Hubie has his work cut out for him if he wants to bring them home safely.

HUBIE HALLOWEEN has some fun performances, but many of the jokes are very silly. What it misses in laughs, it makes up for in some positive themes. Characters learn that being kind to other people is always the answer, even when they’re mean or rude to you. The movie also promotes putting others before yourself, marriage, family, being a foster parent, and donating to a homeless shelter. However, HUBIE HALLOWEEN has lots of potty humor, excessive foul language, some lewd jokes, and some scary scenes in haunted houses that might scare children and younger teenagers. So, MOVIEGUIDE® advises extreme caution.

(BB, C, O, LLL, VV, S, AA, D, M):
Dominant Worldview and Other Worldview Content/Elements:
Strong moral worldview includes a Jewish family as major characters and extols being kind and nice even when others are being mean, putting others before yourself, marriage, family, being a foster parent, donating to a homeless shelter, and a character takes matters into their own hands to protect someone they love even if he has to kill to protect them, plus a Christian element where a priest is seen at a funeral, and some occult references to ghosts and haunted houses, but the houses aren’t really haunted
Foul Language:
23 obscenities, 9 profanities, a character says “God rest his soul,” a comment about swearing to God, inappropriate name calling, as well as inappropriate sayings on shirts, lots of comments about urinating and defecating as well as two scenes where peeing is depicted, vomiting, poop is lit on fire and thrown at someone, passing gas, man seen on the toilet with his pants down, dog eats his own feces
Violence:
Strong and light violence, some of it comical, includes things are thrown at a man throughout (he’s a comic foil of derision for mean people), a bike crash, depiction of someone being hanged, man pushed in a hole on top of a casket and another man passes out and falls in on top of him, food fight, man hit in the face a few times, Halloween costumes with fake blood on them and other things, comment about borrowing gun and shooting someone, movie scene showing someone eating another person’s face, man runs into a tree, and gas is poured on people, and they are almost set on fire, but a character saves them
Sex:
A comment about having intercourse, some lewd jokes and a married couple kisses
Nudity:
No explicit nudity, but older women dressed as Harley Quinn for Halloween are wearing revealing outfits, and a young girl dressed in the costume as well
Alcohol Use:
Underage drinking, but no drunkenness
Smoking and/or Drug Use and Abuse:
Cigarette smoking once, but no drugs; and,
Miscellaneous Immorality:
Lying, kidnapping, breaking and entering, mention of divorce, revenge, envy.

HUBIE HALLOWEEN is a horror comedy on Netflix starring Adam Sandler as a nerdy man with a speech impediment who enjoys the Halloween holiday, but comes to believe the town is being stalked by a serial killer. HUBIE HALLOWEEN has some fun performances and strong moral elements promoting kindness, helping others, family, and marriage, but the jokes are silly, and the movie has lots of potty humor, excessive foul language, some lewd jokes, and scary scenes in houses that some people believe are haunted.

The movie opens at Westford State Mental Hospital. A patient just escaped, and the town of Salem has been warned that he might come back to his hometown for the holiday.

Cut to Hubie, who’s easily scared despite his love for the Halloween season. Hubie is riding his bike to work to the supermarket deli. However, Hubie’s ride is much harder than most others because people make fun of him and throw things at him for no reason.

Hubie gets sidetracked when he sees his childhood crush, Violet, and ends up wrecking his bike. Hubie shakes it off and heads into work, where again, he’s mocked by his fellow employees and customers.

Despite this, Hubie still has a good attitude. When his shift is over, Hubie goes outside to talk to Sargent Steve Downey with the police department. Hubie is passionate about keeping others safe, but especially worried about it during Halloween. Downey doesn’t really take anything Hubie says seriously, but listens to him anyway.

When Hubie arrives home, he meets his new neighbor, Walter Lambert. Walter tells Hubie to not check on him if he hears any weird noises coming from his house, and Hubie agrees thinking Walter is nice. Hubie is greeted by his mother when he gets home, and the two of them are going to decorate Halloween cookies. Hubie’s mother encourages him to stick up for himself and to be brave even when people aren’t nice to him.

The next day is finally Hubie’s favorite holiday of the year, Halloween. Hubie is easily scared, but loves it anyway because it’s one of the only holidays he can celebrate since he’s Jewish. Hubie starts the day in detective mode wanting to learn more about his neighbor Walter, before heading to the school to talk to the students about safety.

Later that evening, as Hubie begins to patrol the streets, he heads to a party full of high schoolers. All the partygoeers make fun of him once again, and one guy comes up with a plan to scare Hubie in the corn maze. However, when Hubie enters the corn maze and watches the boy suddenly disappear, Hubie knows this Halloween night is going to be different than others.

HUBIE HALLOWEEN is an average Netflix comedy. What the movie misses in laughs, it makes up for with the good themes of kindness when others are mean and being nice and looking out for others before yourself. The set design is full of fall colors, pumpkins and Halloween spirit, which made for a lively viewing experience. Most of the jokes are silly, if not stupid, but the way the veteran actors deliver them is funny and infectious.

HUBIE HALLOWEEN has a strong moral worldview teaching that even when facing bitter, rude people, kindness is always the answer. Characters learn that being nice matters. In the end, all of the people who were mean were fighting their own inner battles and taking their insecurities out on others to make them feel better. The movie also promotes putting others before yourself, marriage, family, being a foster parent, and donating to a homeless shelter. However, HUBIE HALLOWEEN is spoiled by lots of potty humor, excessive foul language, some lewd jokes, and scary scenes in haunted houses that might scare children and younger teenagers. So, MOVIEGUIDE® advises extreme caution.