THE PLACE OF NO WORDS 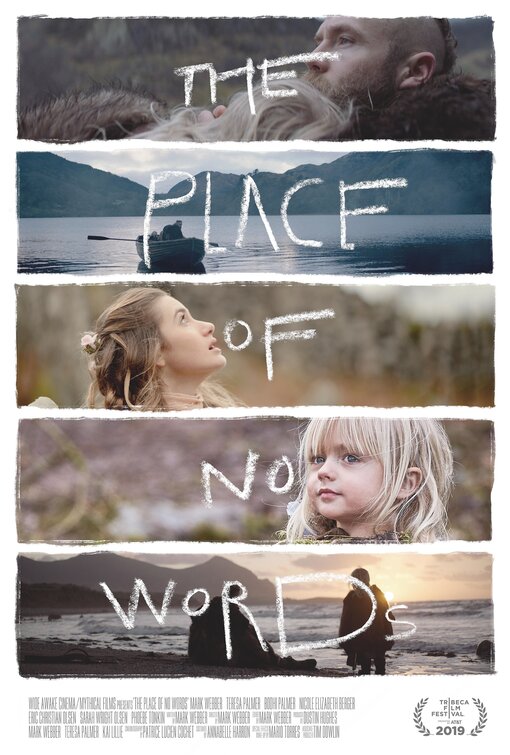 THE PLACE OF NO WORDS follows 3-year-old Bodhi as he asks the question, “Where do we go when we die?” The question is prompted by his loving parents, who try to communicate to Bodhi that his father’s dying of cancer. Bodhi and his father explore multiple fantasy lands full of mystery and Bodhi’s imagination. In these fantasy worlds, Bodhi and his father learn how to cope with life’s realities like loss, love and laughter.

THE PLACE OF NO WORDS is a poetic drama that switches between reality and imaginary worlds created by the father and his son. The transitions are confusing. They distract from the movie’s sometimes beautiful, heartfelt performances. Also, the movie lacks the playfulness one expects from a fantasy movie. Sadly, the little boy’s questions about death, love and sorrow are met with a strong, depressing humanist worldview that rejects the existence of God and an afterlife. The movie’s beautiful cinematography and creativity is commendable, but it should have been used to tell a hopeful story. MOVIEGUIDE® can’t commend THE PLACE OF NO WORDS because of its depressing humanist worldview.

(HHH, B, C, FR, VV, A):
Dominant Worldview and Other Worldview Content/Elements:
Strong Humanist worldview where death is seen as final, although heaven is discussed it is pushed aside in favor of the idea that no one knows what happens when people die, there is also mention of our bodies just returning to the ground, brief references to angels, and to God as a creator of humans, but the humanist view of the afterlife prevails, there is some religious imagery with mixed themes, a mural depicts Christianity and biblical stories alongside Hindu and Buddhist imagery, and there’s an emphasis on family and love
Foul Language:
No obscenities, but one light profanity
Violence:
Light fantasy violence, there are swords that are seen, but never used, characters brandish toy laser guns used to defeat robots, all the fantasy violence is imagined by a 3-year-old child and is relatively mild, one instance sees a man punching himself (although blood is seen after each blow, the man’s face is clear of any marks or gore), the movie’s central storyline is that a 3-year-old boy is having to come to terms with his father dying of cancer, and, while there are many conversations about death and some hospital scenes, there is nothing graphic
Sex:
No sex
Nudity:
Three-year-old boy is shirtless, a father and son play in a pool
Alcohol Use:
No alcohol use
Smoking and/or Drug Use and Abuse:
No smoking or drugs; and,
Miscellaneous Immorality:
Some fantasy elements, but they stem from a little boys imagination rather than anything pagan or occult.

THE PLACE OF NO WORDS is a poetic drama that explores the themes of death, love, pain, and sorrow through the imagination and eyes of a 3-year-old and his dying father. The beautiful, heartfelt, authentic performances in THE PLACE WITH NO WORDS are undercut by confusing transitions between fantasy and reality and by a depressing humanist worldview with no hope of an afterlife.

The movie opens with a child, Bodhi, sitting on his father’s chest. The father is clearly ill and is holding back tears but tries to entertain his son’s questions. The movie hard-cuts to the father and son, as they are now dressed in medieval attire and are rowing to shore.

As they begin a long trek up the mountain, the movie cuts back and forth between the imaginary world and reality. Bodhi and his father explore each of these worlds together. After resting at the summit of the fantasy mountain, Bodhi asks questions and makes observations to his father.

The father and son reach a clearing, and Bodhi suggests they pretend to be dead. His father quickly shows his aversion to this idea, but the boy insists. While Bodhi is playing dead in the fantasy world, the father asks Bodhi what he thinks will happen when they die. Bodhi says that they were only playing make-believe and that real death saddens him.

Cutting back to reality, the father and son are driving to a park. Once they arrive, the father gives Bodhi a tunic, a sword and a shield. After donning his costume, the two set off on a mission. Quickly the park turns into a fantasy world where Bodhi encounters a fairy who leads them to the mysteries deeper in the forest.

The movie follows this pattern of switching back and forth between the imaginary world and reality. Along the way, Bodhi learns how to cope with his father’s death and all the emotions that he experienced as his son. The father struggles with telling his son the news that they will never see each other again.

THE PLACE OF NO WORDS is a poetic drama that explores the themes of death, love, pain, and sorrow through the imagination and eyes of a 3-year-old and his dying father. The movie switches frequently between reality and the imaginary world created by the father and his son. The transitions are confusing, however, and tend to distract from the beautiful, heartfelt and authentic performances of the real-life family who are acting as a family in the movie. While this is a movie about a child’s imagination, the movie lacks the playfulness one might expect of a fantasy movie.

Sadly, Bodhi’s questions about death are met with a strong humanist worldview that neglects God as the creator. This forfeits the well-intentioned, heavy, emotional nuance of the movie and substitutes it with a joyless, hopeless exploration of humanity’s frailty. This is made no less harsh with it all coming from a child’s perspective. While the beautiful cinematography and creativity is not something to gloss over, it could have been employed to tell a story filled with hope. MOVIEGUIDE® can’t commend THE PLACE OF NO WORDS because of its depressing humanist worldview.

Also, although the movie has some brief Christian, biblical references and images, it also has some brief Hindu, Buddhist references. Of course, traditional Buddhism also has a humanist, agnostic worldview where God, Heaven and Hell are seen as delusions. Buddhism doesn’t necessarily rule out the possible existence of a god or multiple gods. Instead, it focuses on techniques to overcome suffering. It is significant that the young boy’s name is Bodhi since it was under a bodhi tree, a kind of fig tree, that Siddhartha Gautama, the Buddha or “Enlightened One,” first discovered “enlightenment.”