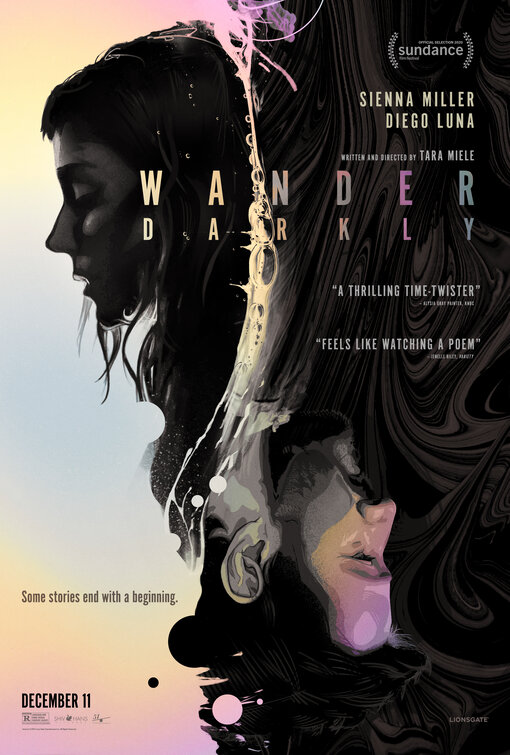 WANDER DARKLY is an imaginative romantic drama. Matteo, a carpenter who crafts wood furniture, and his girlfriend, Adrienne, have just had a baby girl and bought a house together. However, Adrienne doesn’t believe Matteo is as emotionally involved as he should be. After a traumatic traffic accident, Adrienne thinks she has died but Matteo assures her that she has not. Adrienne is forced to confront their troubled relationship and the future of their daughter. She and Matteo start to relive their past together as Adrienne tries to solve the mystery of the car accident.

Watching WANDER DARKLY, viewers will wonder sometimes whether Adrienne and Matteo are ghosts or Adrienne’s just imagining everything. Ultimately, the story appears to be happening in the confines of memory and imagination. On the positive side, the story builds to an emotionally powerful conclusion. Also, the acting is excellent. However, the movie has a strong Romantic worldview, mixed with some light Christian and moral elements. WANDER DARKLY also has lots of strong foul language, some scary moments and an explicit, brief bedroom scene. So, MOVIEGUIDE® advises excessive.

(RoRo, B, C, O, LL, VV, SS, NN, A, M):
Dominant Worldview and Other Worldview Content/Elements:
Strong Romantic worldview mitigated by some light moral, biblical, Christian references such as traditional wedding vows recited, other wedding vows recited, a marriage scene occurs, a funeral scene occurs in a Catholic church where man recites a verse from the Book of Ecclesiastes, love blossoms, there’s a very moving and uplifting scene between a mother and her daughter at the end, and a couple apologizes to one another and forgiveness ensues, plus a scene with a palm reader, and movie doesn’t say if two characters are sometimes ghosts (in the end, these scenes seem to take place in one person’s memory and imagination)
Foul Language:
18 obscenities (about 11 “f” words) and six light profanities
Violence:
Strong violence when a vehicle suddenly slams into a car, couple have bloody wounds from traffic accident, doctors fail in trying to revive one character, a man breaks a car window to save a person involved in traffic accident, frantic dancing and beating of drums by people dressed in skeleton type costumes during Day of the Dead celebrations, woman falls on the floor, baby appears to stop breathing but revives, suicide theme in three scenes
Sex:
Brief depicted sex in a bedroom scene with a man on top of nude woman, a verbal reference to oral sex, man with a girlfriend starts kissing another woman, but he stops, and unmarried couple has a baby and buys a house together
Nudity:
Upper female nudity in brief bedroom scene, two mages of breast feeding a baby, images of upper male nudity
Alcohol Use:
Brief alcohol use
Smoking and/or Drug Use and Abuse:
No smoking and distraught character almost dies from taking a few pills; and,
Miscellaneous Immorality:
Lying, woman says she doesn’t want a funeral in a church, tension between man and his girlfriend’s mother, an unmarried couple argues, and people have memorial shrines honoring their beloved loved ones who’ve passed away, but they don’t overtly worship the dead.

WANDER DARKLY is an imaginative romantic drama about a woman who thinks she died in a car accident and tries to reconstruct her past and her young daughter’s future with the help of her longtime partner, the father of her child. WANDER DARKLY’s story leads to a very moving conclusion celebrating love, but it contains lots of strong foul language, some scary moments and an explicit, brief bedroom scene.

As the story opens, Matteo, a carpenter who crafts wood furniture, and his girlfriend, Adrienne, have just had a baby girl, Ellie, and bought a house. All is not well between them, however. Adrienne’s still not happy. Even though Matteo’s done what she’s asked, she doesn’t feel he’s fully emotionally committed to their relationship. She suspects he harbors feelings for another woman with whom he’s been friends. It doesn’t help that he forgets about their date night, to attend a party at the friend’s house.

On the ride back from the party, they start arguing about their feelings for one another. Adrienne accuses Matteo of not being totally honest with her. At that moment, a car smashes head on into their car. Cut to Adrienne being wheeled into the hospital with lacerations on her head.

Suddenly, Adrienne is standing and seems to be watching as the hospital staff wheel her dead body into the morgue. Disoriented, Adrienne seems unstuck in time. She attends her own funeral and watches as her mother and father take charge of Ellie, then sees her mother talking to her teenage daughter about why her father decided to leave them. Just as suddenly, Adrienne finds herself on a walkway high above a freeway. She thinks about jumping off the walkway into the oncoming traffic, but Matteo appears and stops her. Adrienne thinks they both must be dead, but Matteo doesn’t see how that’s possible.

Adrienne and Matteo start to relive the most recent past and the history of the lives together, including a visit to see Matteo’s family in Mexico by the seashore. As Matteo tries to convince Adrienne at their house that she isn’t dead, the scenes from the past show them discussing the feelings between them back then. During this process, Adrienne looks for clues about what went wrong between them and solve the mystery of the accident.

WANDER DARKLY moves slowly, but builds to an emotionally powerful conclusion. Sienna Miller as Adrienne and Diego Luna as Matteo both do an excellent job, but this is clearly Sienna Miller’s movie. She delivers a tremendously layered, impressive performance that’s deeply touching. The filmmakers touch on issues of life and death, but avoid straying totally into the dangerous realm of the occult, though there is a scene with a palm reader who tells Adrienne she has a very short lifeline. In that scene, Adrienne tells the woman that Adrienne already knows she’s going to die in a traffic accident, but it becomes clear that Adrienne is speaking from the perspective of the time period following the accident. Ultimately, the movie jumbles life, death, past, present, future, reality, and fantasy to tell its story about the romance between Adrienne and Matteo. The movie’s ending eventually straightens everything out to where many of the movie’s scenes are taking place in Adrienne’s memory and imagination.

That said, WANDER DARKLY has a strong Romantic worldview, though there are some positive references to marriage, traditional biblical wedding vows, a Bible verse, and a Christian church. The movie’s ending is very moving and morally uplifting. The movie also has lots of strong foul language and an explicit, brief bedroom scene between the story’s unmarried couple. So, MOVIEGUIDE® advises excessive for WANDER DARKLY.